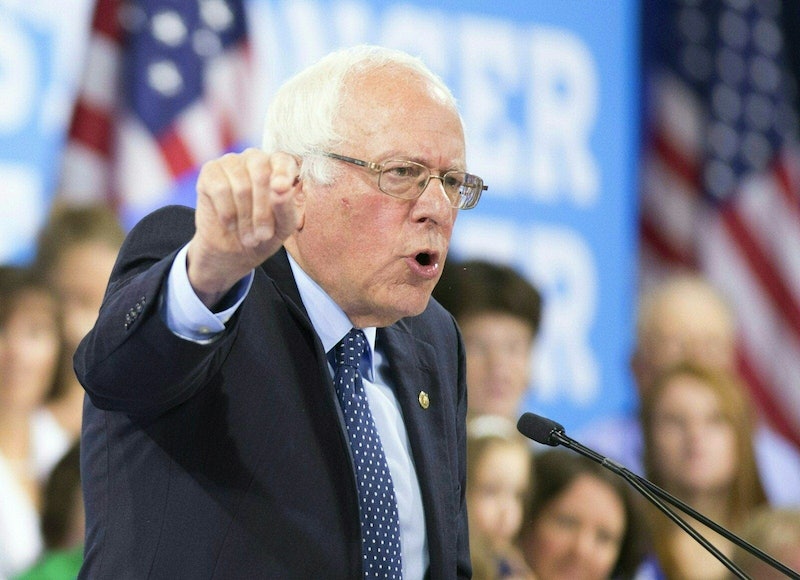 Shortly after Sen. Bernie Sanders called for Debbie Wasserman Schultz to resign from the Democratic National Committee on Sunday, the DNC chair did just that. After emails showing an alleged bias against his presidential campaign were leaked by WikiLeaks — and on the eve of the Democratic National Convention — Schultz announced she would step down from her position at the end of the party's nominating convention. Bustle has reached out to the DNC for comment. In a sign of his dedication to building party unity, Sanders' response to the DNC chair's resignation was brief and to the point. The senator hailed Schultz's resignation as "the right decision for the future of the Democratic Party."

"Debbie Wasserman Schultz has made the right decision for the future of the Democratic Party," Sanders said in a statement posted Sunday to his official Twitter account. "While she deserves thanks for her years of service, the party now needs new leadership that will open the doors of the party and welcome in working people and young people. The party leadership must also always remain impartial in the presidential nominating process, something which did not occur in the 2016 race."

Sanders' approval of Schultz's resignation comes as no surprise. In a series of interviews conducted for various Sunday news shows before Schultz's resignation was announced, Sanders remained firm in his belief Schultz had only one option — to step down as the party's chair. "I think she should resign, period," he said on ABC's This Week.

Speaking on CNN's State of the Union, Sanders had said he wasn't shocked by the emails, which allegedly show party leaders actively brainstorming ways to undermine Sanders' primary campaign. He stressed he'd had no doubt the DNC had been supporting Hillary Clinton's campaign over his many months ago and had long been calling for Schultz to resign. "I don't think she is qualified to be the chair of the DNC, not only for these awful emails, which revealed the prejudice of the DNC, but also because we need a party that reaches out to working people and young people, and I don't think her leadership style is doing that."

While Sanders' statement refrained from mentioning how Schultz's decision to resign may drive his next move, it's unlikely he'll attempt to challenge Clinton as the Democratic nominee. Prior to the DNC chairwoman's resignation, Sanders told NBC's Meet the Press the leaked emails had not swayed him from supporting Clinton's presidential campaign. "What a campaign is about is not about Hillary Clinton; it's not about Donald Trump. It's about the people of this country."