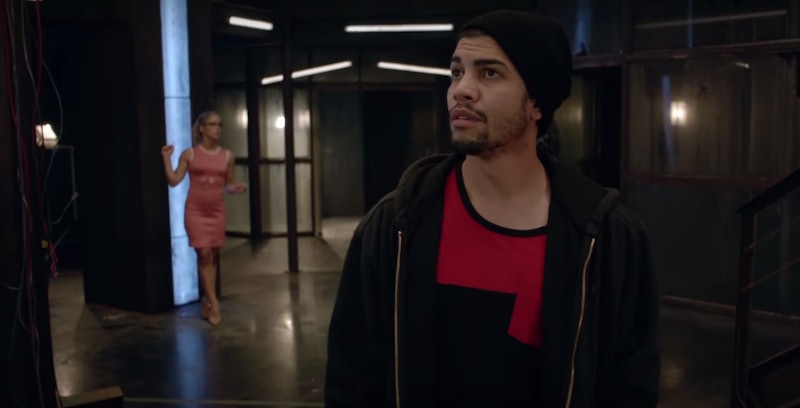 Arrow fans, I promise you I will not be mean and make a joke about you "failing" Comic Con If you didn't know that Arrow debuted the Season 5 Sizzle Reel there on Saturday. But seriously, how could you not know?! Well, if you missed out, I'll be kind enough to provide you with the enticing trailer right here, because I am feeling generous in my Arrow love. But first, I'll tell you a little bit about it. The Arrow Season 5 sizzle reel introduces us to who's on the new Team Arrow, a group that's to be expected after the other New-Yet-Now-Old Team Arrow was reduced to just Oliver and Felicity in the season finale. And, you know, while Oliver and Felicity are my favorite team, that's not nearly enough people to man the streets of Star City, the apparent crime capital of the DC TV Universe, so I'm all for an expanded group.

So, who is on the New(est) Team Arrow? Well, the show smartly incorporates two characters who took a stab at the whole vigilante thing last season, but did so somewhat unsuccessfully. But that's the whole point. Oliver, vigilante extraordinaire, is going to train them so they don't get arrested or nearly killed. Actually, that seems incorrect being that both of those things happen to the Green Arrow on a regular basis. Oliver and Felicity are just trying to make sure they can protect the city and themselves with as minimal damage and law enforcement involvement as possible.

Anyway, back to the "who" of this equation. Check out the New Team Arrow members below, because there's someone you definitely haven't seen before on this list.

Remember that girl who dressed up like the Black Canary and made poor, poor Lance think Laurel wasn't dead? Yep, she's back.

This one isn't too surprising given how much he helped the team in the latter part of last season, but it's still a very cool thing to see him become official.

According to Bleeding Cool, "The character, created by Max Allan Collins and Terry Beatty first appeared in 1987 in a four-issue miniseries. He initially appears as a vigilante who takes up the cause following the death of his girlfriend." Will the show follow suit? Who knows. But, this trailer makes me excited to see where they take the character.

I don't know about you, but I think they've got potential.