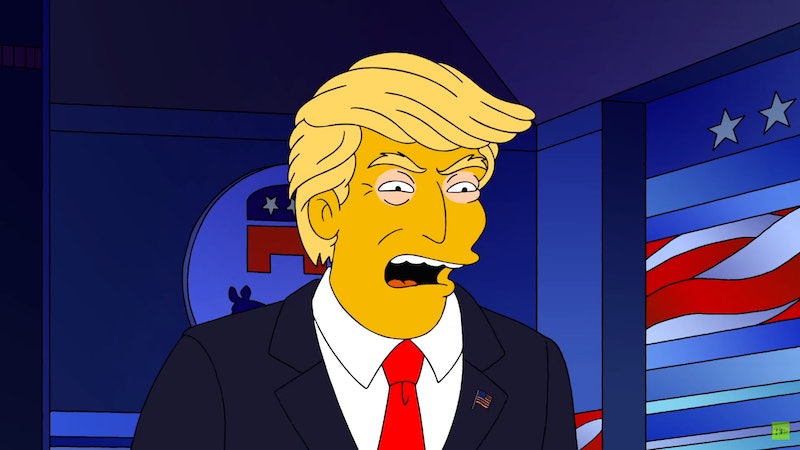 As the internet and Simpsons fan saying goes, "The Simpsons already did it." The long-running animated Fox TV series actually predicted a Donald Trump presidency back in 2000, and fast forward to 2016: Trump is now the Republican presidential nominee. Luckily for TV fans hoping that the show would capitalize on this foresight, The Simpsons will parody Trump this fall, exec producer Al Jean revealed at Entertainment Weekly's Con-X at Comic-Con. According to Jean, the animated show will address the controversial businessman-turned-presidential-hopeful in two ways: A special web short and an episode in which Trump surrogate billionaire Mr. Burns starts Burns University, a parody of Trump University.

EW reported that Jean claimed that most of the current Simpsons writing staff is not a fan of Trump for president, but the producer promised that the show will keep an even playing field when it comes to satirizing the candidate. "Trouble is trying to stay even-handed, and it’s hard when a guy is saying, ‘I’m going to let Russia invade Europe and take over,'" Jean said, according to EW. "He certainly lends himself to animation, because the hair is amazing. We have [a web short] coming out, and you see what his hair is: It’s actually an orange cat he turns backward."

The Simpsons is no stranger to Trump presidential parody, as shown by that incredible prediction many years back. The 2000 episode "Bart to the Future" flashed forward to show Lisa Simpson becoming the first "straight female" president of the United States, taking over for President Trump, so the series knew it was a possibility, even 16 years ago. How crazy is that? But Trump aside, throughout its run, The Simpsons has commented and satirized many presidential elections. It's all been done in the balanced and even-handed way that Jean referred to, in which no candidate has been directly endorsed and all viewers were left laughing. Check the satires out below.

In 1992, President George H.W. Bush was running for re-election and he made a speech in which he said, "...we need a nation closer to the Waltons than the Simpsons." Soon after the remarks, The Simpsons responded by modifying the show's trademark opening credits (above) to show the family watching the speech. Homer says "huh?" but Bart is able to fully articulate his thoughts: "Hey, we’re just like the Waltons. We’re praying for an end to the Depression, too."

In the 1996 non-canon Halloween episode "Treehouse of Horror VII," aliens Kang and Kodos kidnap presidential candidates Bill Clinton and Bob Dole to take their places on the campaign trail for world domination. When Homer finally exposes the fact that both candidates are aliens, the show comments on the two-party system and how the parties may not be so different after all. When a man speaks up and says he'll vote for a third party, the aliens tell him, "Go ahead, throw your vote away."

Bart's longtime rival Sideshow Bob runs for mayor as a Republican in the 1994 episode "Sideshow Bob Roberts," which parodies the 1960 Watergate scandal. Upon investigation, Lisa finds out that Sideshow Bob rigged the election by using names of dead people and pets. It's a storyline that gives us the classic Lisa line, "Oh no! The dead have risen and they're voting Republican."

In a parody of California's 2003 gubernatorial election, Homer and most of Springfield runs for mayor after Mayor Joe Quimby gets recalled and his "Mayor" sash is revoked. Seriously, Homer runs against 200 Springfieldians.

In the 1990 episode "Two Cars in Every Garage and Three Eyes On Every Fish," Mr. Burns runs for governor of whatever state Springfield is in, because the state is trying to shut down his power plant. The election mudslinging (and satire) memorably comes to a head when Burns has to sit down to dinner with the Simpsons and dine on a three-eyed fish Bart caught by the power plant.

Earlier this year, The Simpsons released this short in which the 2016 Presidential election debates stressed Marge out. Homer tries to help Marge by asking her to "visualize another America — one where Republicans, Democrats, and Donald Trump all get along."

Personally, I can't wait to see what The Simpsons comes up with for the rest of the 2016 election, considering how hilariously biting yet thoughtful the above election parodies were. Because, as we learned in the year 2000, The Simpsons is always one step ahead of everyone else.