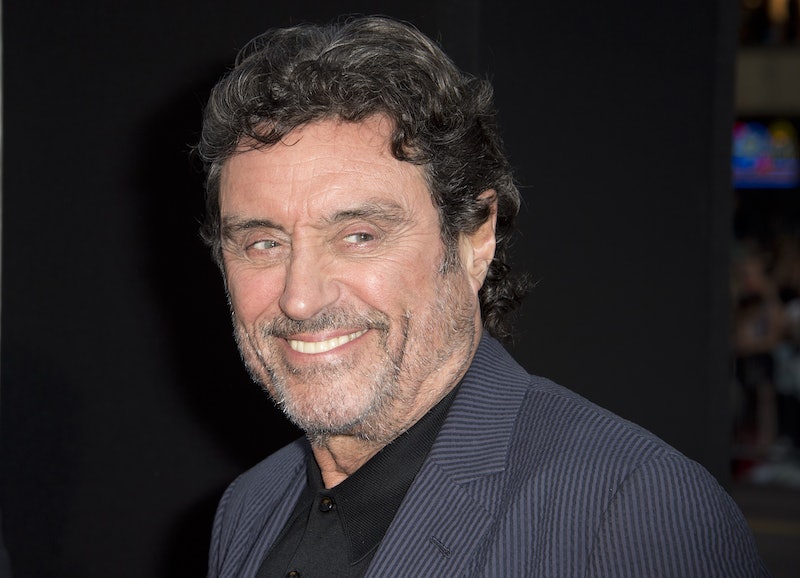 There are only a few certainties in life: Death, taxes, and that it's very, very bad to spoil Game of Thrones for anyone. Earlier this year, though, actor Ian McShane casually dropped the spoiler (see what I'm doing?) about his character bringing the Hound back to life on BBC Breakfast. So while at Comic-Con this weekend, Vulture asked the American Gods actor about the slip, and it turns out that McShane doesn't care that he spoiled Game of Thrones . At all.

McShane, who played Ray on the show, has no regrets about spoiling the one show it is absolutely unacceptable to spoil, even to non-fans. I guess he has never been yelled at by an entire dinner party for spoiling the Red Wedding or the end of the GoT pilot (ahem, true story)? But still, not cool, man. “They take it very seriously, some people,” McShane told Vulture about the backlash he got for ruining the Hound plotline. “Dear God! I mean, I didn’t have to sign one of those contracts where you don’t talk about it. And on the other hand, if you tease it up, more people will watch it. So it wasn’t exactly bad publicity for HBO, you know?” He's referring to the event that occurred earlier this year, when McShane spoiled his episode and storyline during an appearance on BBC Breakfast, where even the hosts realized he was sharing something huge. Check out the clip below.

McShane has no regrets about spoiling that plotline, apparently, and seems happy to not be that closely involved with GoT. The aactor, who played a Septon and mentor to the rediscovered Hound in one episode, told Vulture that he was glad the role was one-and-done. “They said it’s a good, juicy, one-episode part that has a big monologue, and we’d love you to go and do it,” McShane said. “Also my grandkids are huge fans of the show, and my son is, so it was kinda like,yeah, absolutely, why not? I didn’t want to do the whole thing, the whole series."

I know that there's a certain expiration date on crying spoiler! but McShane spoiled his Game of Thrones episode before it even aired, and that's not OK. According to Vanity Fair, this season of the show was so concerned with secrecy that HBO didn't send out press screeners, so this reveal was huge. Sure, you could read the source material — George R. R. Martin's novel series — and get spoiled too in a way, but readers of the books know to zip their lips and not ruin it for TV fans. Game of Thrones has one of the most devoted fanbases for a TV show, and even for those who aren't fans, a lot people are currently playing catch up and so they, too, would appreciate a spoiler-free viewing experience of one of TV's finest dramas on the air right now.

So while McShane didn't think much of his spoiler, you should not spoil Game of Thrones. Trust me, it will not be fun for you.