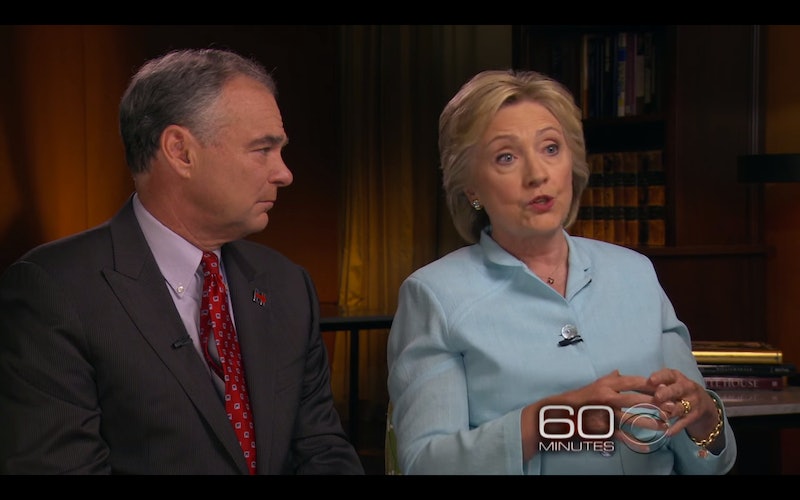 In an exclusive interview on 60 Minutes, Hillary Clinton explained why she chose Virginia Sen. Tim Kaine as her running mate. Priming the kick-off of the Democratic National Convention, the episode aired Sunday evening on CBS. During their first interview together, the Democratic presumptive nominee and her recently-announced running mate discussed their campaign, as well as the future of the Democratic Party, with correspondent Scott Pelley.

Clinton waited until the Friday before the DNC to announce her vice presidential pick in a text message to campaign supporters. Though Kaine was among the favorites on her shortlist for his moderate politics, Democratic voters have yet to familiarize themselves with the pair's dynamic. During the beginning of their interview — one of the first to provide insight into that dynamic — Clinton revealed just how much she trusts Kaine's ability to help her potentially lead the nation. In the first minutes of the interview, she told Pelley:

Well, as I have said throughout this whole process, the most important qualification is that the person I pick be ready to become president if something were to happen. I don't think there's any greater responsibility. So he's highly qualified. He's been a mayor, a governor, a senator.

During elections, vice presidents are lauded primarily for their ability to attract a certain type of voter or provide a face for the campaign. Though they generally don't play a huge role in determining the political nature of a campaign, Clinton reminded her constituency of the responsibility they nonetheless carry. And with over 15 years of experience in political office under his belt, Kaine has certainly earned Clinton's trust.

The former secretary of state's following point is a bit more debatable and foreshadows future debates over Kaine's progressiveness when it comes to abortion.

Secondly, he's a progressive who likes to get things done. That's how I describe myself. And I look at his record, his civil rights record, his education record, his taking on tough issues like gun safety, climate change. The whole picture is one that I find, you know, very appealing.

A major indicator of a politician's progressiveness is his or her views on abortion laws. Clinton called Kaine a progressive, but didn't mention his views on that hot button issue. Though the senator of Virginia has voiced his support for upholding Roe v. Wade, his advocacy for a parental consent law in Virginia has raised some concern among pro-choice advocates. His promotion of abstinence, as well as his own opposition to abortion — which he acknowledges as a personal opinion that shouldn't be enforced upon others — also have the potential of undercutting his status as a progressive candidate, especially among women, as the general election nears.

Clinton's last reason for choosing Kaine is one with which nearly anyone can relate. Overall, if elected president, Clinton simply wants someone to provide her with honest feedback.

And then finally, I want somebody who will be candid and will tell me, "Hey, I don't agree with this," or, "Could you think about it somewhat differently?" I don't think I have all the answers. I think that we'll be a good team. I believe we'll work well together. I believe that he will give me his best advice.

The next several days of the DNC will play a vital role in determining how the country perceives both Clinton and Kaine as a team. With both slotted to speak, they'll prove how well they're equipped to battle the Republicans in November.