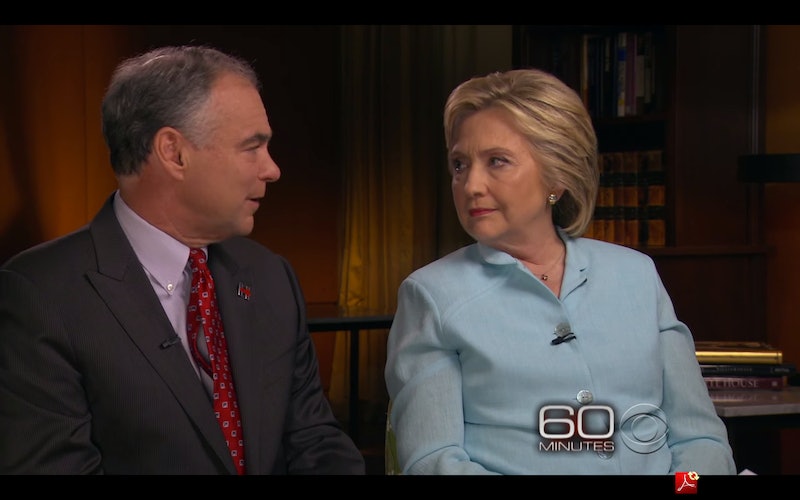 Just hours following the resignation of Democratic National Committee chairwoman Debbie Wasserman Schultz, Hillary Clinton and Tim Kaine discussed the DNC email leak on 60 Minutes with CBS correspondent Scott Pelley. The emails, released to the public by WikiLeaks, allege that members of the DNC reportedly attempted to hurt Vermont Sen. Bernie Sanders' primary election campaign. Though both politicians expressed opposition towards the alleged efforts, Kaine provided some particularly interesting insight into what being a committee member is really like during a presidential election year.

Almost 20,000 emails between DNC staff members were leaked just three days prior to the Democratic National Convention's kick-off. One of them, which Pelley referenced, was one from DNC chief financial officer Brad Marshall. He doesn't explicitly mention Sanders' name anywhere in the message, but references Judaism. In message dated May 8, he wrote:

It might may (sic) no difference, but for [Kentucky] and [West Virginia] can we get someone to ask his belief. Does he believe in a God. He had skated on saying he has a Jewish heritage. I think I read he is an atheist. This could make several points difference with my peeps. My Southern Baptist peeps would draw a big difference between a Jew and an atheist.

Clinton responded to Pelley's inquiry about the controversial email, stressing that she hadn't read any of the leaked messages. Her rejection of religion in politics presents a sharp contrast between her own views and those of the Republican campaign, which has traditionally held up socially conservative Christian values.

No, I didn't know anything about it and I haven't read any of those but I am adamantly opposed to anyone bringing religion into our political process. I mean the Constitution says no religious tests, so that is just absolutely wrong and unacceptable.

Characterizing the Democratic Party as one that does not pit its candidates against each other, she told Pelley that she was proud not only of her own campaign, but also of Sanders' run. Since the emails were leaked, the Vermont senator has maintained his support for the presumptive nominee, though he claimed to have known the DNC was allegedly favoring Clinton all along.

After Clinton was finished speaking, Kaine interjected with his own personal anecdote. He served as chair of the DNC during President Barack Obama's first term in office, and shed some light on the reality of the current situation. According to him, it's nearly impossible to not have an opinion about a candidate, especially as someone who's involved in politics. And that truth shouldn't come as a shock.

In the absence of Wasserman Schultz on the convention stage, the DNC email leak won't be forgotten about too soon. If anything, it will be a testament to whether the Democratic Party can remain united in the face of controversy — at least better than the Republican Party did.