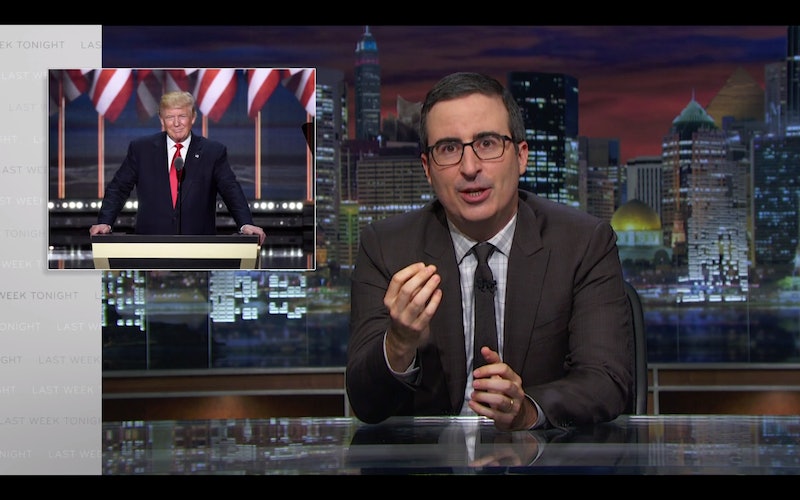 Sundays are going to feel a little less empty now that Last Week Tonight is finally back after taking a much-deserved break for nearly a month. John Oliver, the show's satirical host, may have been on vacation, but his spanning coverage of the past few weeks' news shows he hasn't skipped out on anything. After all, how could he miss an opportunity to poke fun at both political parties during such a pivotal time in the election season? With the RNC having just ended and the DNC coming up, his timing was impeccable.

Since his last full-length episode at the end of June, however, Oliver hasn't been totally out of the loop. Throughout the month of July, he's released web exclusive videos — one on his official election endorsement and one for Independence Day — that gave his audience a taste of what the second half of the show's season will be like. When he returned to hosting his usual full-length show on Sunday, Oliver spoke about anything and everything from the Democratic National Committee email leak, to Roger Ailes, Boris Johnson, and most obviously, the Republican National Convention.

Oliver started by addressing Hillary Clinton's vice presidential pick, Virginia Sen. Tim Kaine, whom he finds to be problematically boring. According to the host, being able to play the harmonica just isn't a fun fact. Soon, he was on to the next topic, moving quickly from point to point.

Building the suspense for his RNC coverage, he delivered a punchy rant on Boris Johnson, the United Kingdom's newly appointed Secretary of State for Foreign and Commonwealth Affairs. Oliver, needless to say, is not a fan. "Interestingly, that is the exact sound that the Oxford English Dictionary makes when you put it in a blender," Oliver said of the politician's attempt at apologizing for a collection of colorful insults.

Finally, Oliver delivered the commentary his audiences had been anticipating: an analysis of the RNC. According to him, the RNC was all about emotion. "He sounds like he's about to announce the first annual Hunger Games," Oliver said of Donald Trump's dark acceptance speech. Ultimately, the host called Trump out for skewing his statistics on crime in the United States — facts that made his speech especially scary. For example, Trump's claim that crime rates are rising in America's big cities isn't true for cities across the board. What's more frightening, however, is that Trump got away with only telling only half of the story, Oliver suggested.

It is worth noting, that since President Obama took office, crime rates, the flow of illegal immigrants over our borders, and claims for unemployment benefits have all declined and yet frighteningly, when reporters started pointing that out, it didn't seem to matter.

Oliver's feelings towards the situation strongly resemble the exasperation he displayed during his famous "Make Donald Drumpf Again" episode.

From there, the welcome-back segment became more amusing as a handful of singers plead that politicians stop using their songs during conventions and other political events. With the DNC beginning on Monday, next weekend's episode is sure to be just as jam-packed.