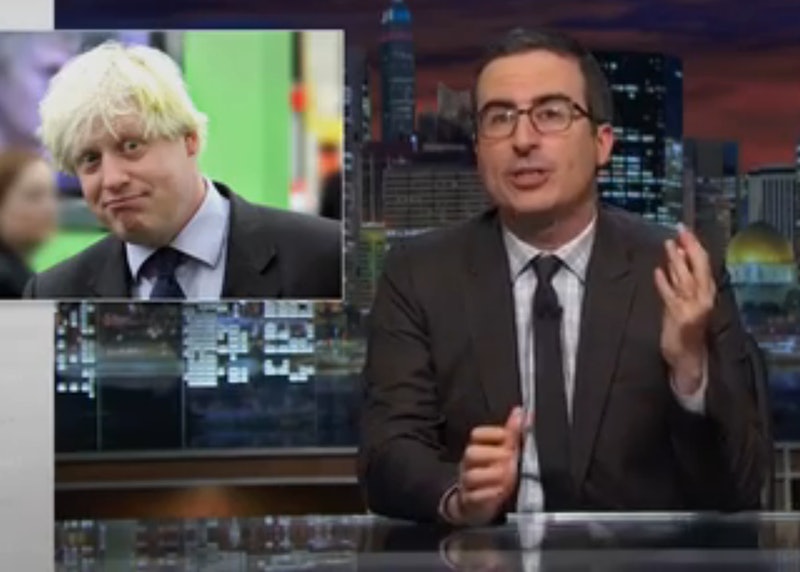 Throughout the lead-up to the Brexit vote, John Oliver took to Last Week Tonight to voice his dismay at the possibility that his country would even entertain a vote to leave the European Union. Well, as you know, U.K. voters did just that — especially after being egged on by politicians like former London mayor and chief Brexiter Boris Johnson. Oliver returned Sunday from his summer hiatus to some shocking news from across the pond: Johnson is back. So cue a John Oliver rant of epic proportions, because it seems the U.K. has yet another problem.

Specifically, Johnson's back as foreign secretary. The change came following the resignation of former PM David Cameron, who campaigned against Brexit and stepped aside to let the next government carry it out. That resulted in the selection of Theresa May as the next Conservative prime minister. And, of course, Oliver already has thoughts on the matter. "While it's clearly too early to know exactly what kind of leader she'll be, one of her first appointments was not really reassuring," Oliver said. That would be Johnson he's talking about:

Yes, Boris Johnson, a grown man who looks like a problem child at a daycare center, is now Britain's new foreign secretary. Boris Johnson, a man with such horrifically poor judgment, he wasn't just Britain's most ardent advocate for pulling out of the EU; he may be the strongest argument for pulling out in general. "Pull out Barnaby, pull out! We don't want to make another Boris. It would be ghastly."

Not the most positive endorsement to say the least of Johnson — neither as a politician nor a human. But it didn't stop there. "Boris is a weird choice for a diplomat," Oliver said, "because, to put it mildly, he has said a lot of dumb things." To make his case, Oliver showed a video clip from a recent press conference featuring Johnson and the U.S. Secretary of State John Kerry. A reporter in the audience pointed out some of the finer things Johnson has said over the years about foreign leaders.

Among the things he's said is that President Obama, because of his Kenyan father, holds an "ancestral dislike for the British Empire." But don't expect things to be better in November. Speaking about Hillary Clinton, the Democratic nominee, he was just as offensive. "Dyed blond hair, pouty lips, and a steely blue stare like a sadistic nurse in a mental hospital." On another occasion, he compared her to Lady Macbeth. The reporter went on to ask Johnson at the news conference, "Do you take these comments back?"

Oliver suggested this was not a good sign, as the question was really this: "Are you going to be as bad at your job as all evidence suggests you will be?" Johnson then went on to acknowledge that apologizing would take him quite a long time — which is sort of an apology for not having time to apologize?

Oliver went on to make his full case against the U.K. politician, pointing out some of the racist and insensitive remarks he has made about other cultures and countries over the years (plus knocking over small children during state visits!). But then it came down to this one observation that nails home what kind of a job Johnson will do:

Boris Johnson might just be the least diplomatic diplomat in existence — which actually makes him perfect for this job. Because what better symbol of centuries of British foreign policy than a foppish buffoon stampeding his way around the world, knocking things over, falling flat on his face, and refusing to apologize.