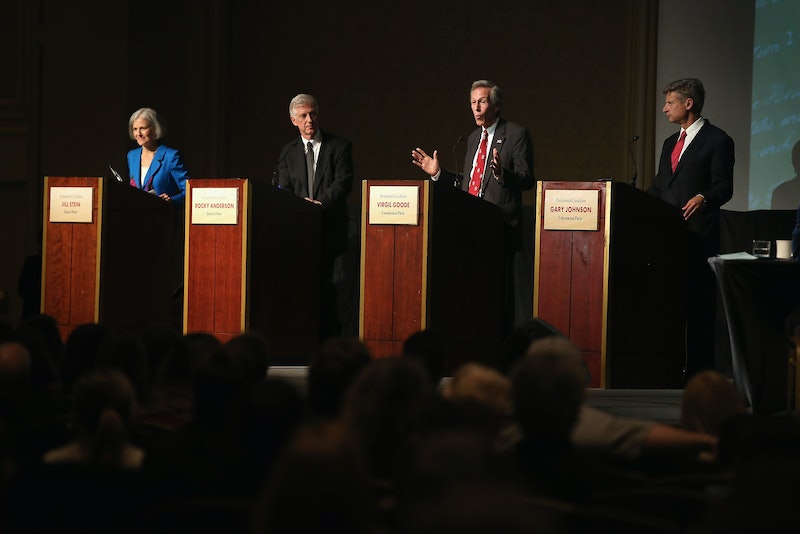 If you're a Republican disgusted by Donald Trump's divisive candidacy, or a Bernie supporter considering going with a third-party candidate after the leak of the DNC emails from primary season, you have two main choices. The established parties that end up on the ballots across the nation — in addition to the Democrats and Republicans, of course — are the Libertarian Party and the Green Party. You may think a vote for either would work to show your disgust for a political status quo, but which one you choose matters, too, because there are many ways Gary Johnson and Jill Stein are fundamentally different. You want to keep these in mind come November.

Of course, it's also important to keep in mind that in the United States, a third-candidate vote in California or Texas is quite different than a vote for Johnson or Stein in Ohio or Florida. Swing states will decide the election in the electoral college — not the popular vote nationwide. So if you find yourself voting from Iowa or Virginia, you might want to reconsider the cost-benefit ratio of a "morally necessary" third-party vote. The cost could be at least four years of a Trump presidency and all that entails. But if you're sure, take these issues into consideration. They may help you cast the right protest vote.

You might be surprised that there's a difference on abortion, given that this is a social issue, something the Libertarians are usually pretty far left compared to the Republicans. But Johnson has some conflicting views like letting states decide abortion law. With Texas we've seen what could happen without SCOTUS intervention.

Stein, on the other hand, has said the government should provide free contraception and abortion access to all American women.

Johnson has said that government spending is "bankrupting us." He was against the 2009 stimulus plan and would push for a balanced budget upon entering office by cutting entitlements and defense spending.

Stein, for her part, would pass the "Green New Deal" to fight unemployment and underemployment. She said the stimulus was too small and favored the rich.

Johnson said that private prisons (which is what the most recent season of Orange Is The New Black tackled) saves money. He pointed to New Mexico, where he served as governor from 1995 to 2003 as a prime example — they saved there, he says, about $20 per person, per day.

4. The Department Of Education

Johnson would get rid of it.

Stein has advocated for a larger role of government in education, an end to privatization of schools, and for free public college.

Stein says she would push for 100 percent of U.S. power to come from renewable energy by 2030. She's anti-fracking and against nuclear energy.

Johnson supports nuclear and is against cap-and-trade. He supports alternative energy sources if the market brings them about.

Johnson would extend NAFTA to the whole world. He doesn't think there should be any restrictions or tariffs on trade, assuming this helps all business — not just multinational giants.

Stein has attacked NAFTA for being the source of illegal immigration. The TPP she has called "NAFTA on steroids," which she hopes to defeat.

See Number #4. Johnson would get rid of it, and income tax, more generally. In its place, he'd implement a 23 percent (regressive) national sales tax (collected by?).

Stein would raise taxes on the rich and close loopholes, all of which would probably require a national tax agency.

Johnson has said he's in favor of imposing income caps on those receiving benefits from government entitlement programs, although he's not necessarily opposed to helping the poor based on some his stances.

Stein supports guaranteeing every American the right to food, a house, utilities, and a job.

More like this
10 Times Boris Johnson Got It Wrong On Trans Rights
By El Hunt and Sam Ramsden
How To Fight For Reproductive Rights, Based On How Much Time You Have
By Courtney Young
LGBT+ Men Fleeing Afghanistan Were Denied Asylum By The Home Office, New Findings Show
By Sam Ramsden
The Music Industry Continues To Fail Black Women
By Precious Adesina
Get Even More From Bustle — Sign Up For The Newsletter