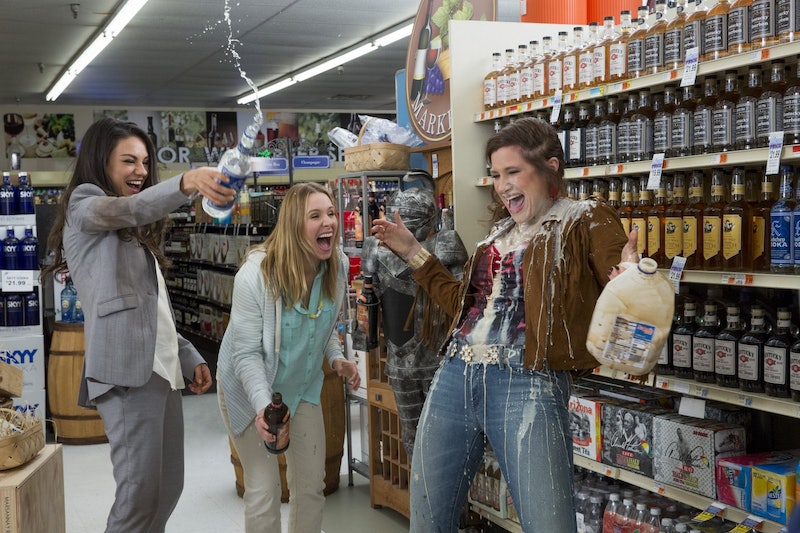 By now, it seems like any time a new comedy comes out in theaters, you can expect some surprising and fun cameo from an unlikely star. Think about it: Ghostbusters, Spy, Zoolander 2 — all great comedies and all chock-full of silly, unsuspecting celebrity cameos. It's not that I'm complaining; on the contrary, I love a good shock moment. I enjoy sitting in the theater, watching the movie, and feeling my jaw hit the floor when I suddenly recognize that person from that thing and think, "oh my gosh what are they doing in this movie?" Surely, I'm not alone in this, and I'm confident that people will be freaking out over one major celeb appearance in the latest 2016 comedy. Yes, the (spoiler alert!) Martha Stewart cameo in Bad Moms will make everyone squeal with delight.

Yes, the queen of home economics herself appears in this movie. Her cameo is quick but hilarious, and she basically plays herself, with a twist. But first, some background on the story of Bad Moms. It's pretty straightforward: three moms who have had it with being stressed out and overworked rebel against the norm and go head to head with the uptight moms of the PTA. The Queen Bee mom, Gwendolyn (Christina Applegate), goes toe to toe with the lead bad mom, Amy (Mila Kunis) for president of the PTA, and in an event to win the vote, Gwendolyn throws a sort of "vote for me" party — hiring Stewart to do the catering. The icon's cameo is pretty quick, but she seems to take it all in stride, even playing up her image and joking about starting her morning with jello shots. Ah, I love a celeb who can make fun of herself.

Surprisingly, though, this isn't Stewart's first foray into the film world. Check out some of her other memorable cameos over the years.

3rd Rock From The Sun

Adam Sandler movie? Why not.

Bad Moms pokes fun at the idea that in order to be a good mom, you have to be perfect, and presumably, this might be why Stewart decided to make a cameo. In an interview with Natalie Morales of the Today Show, the mogul said that she's "been accused of being a bad mom my entire motherhood." So it seems the domestic queen has experience with the themes of the film. When the movie hits theaters, don't miss your chance to see all the "bad moms," from Stewart to Kunis, in action.