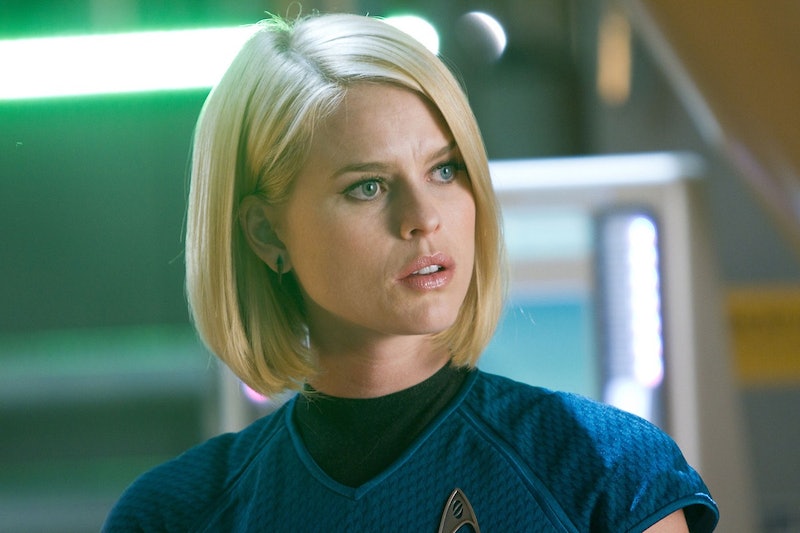 If you're a Star Trek fan, you probably noticed that a member of the Starship Enterprise crew was missing from the reboot series' most recent addition, Star Trek Beyond. Carol Marcus, the scientist who joined the Enterprise crew in Star Trek Into Darkness, is noticeably absent in Beyond — though, curiously, she's never even mentioned. In fact, audiences who skipped Into Darkness watching Beyond would never guess that her character ever existed. But just why isn't Carol Marcus in Star Trek Beyond ?

When Carol was introduced in Star Trek Into Darkness, fans of the original series and movies were thrilled. Carol, as played by Bibi Besch, was a key player in the original film, Star Trek II: The Wrath of Khan, where she was Captain Kirk's lover and the mother of his child. Bringing her into the alternate timeline of the reboot series was a move that could allow her character to grow beyond a love interest. Alas, the new interpretation of the character, played by Alice Eve, was not well received, with Marcus' most memorable scene involving her stripping down to her underwear, an unnecessary sequence that ended up being so controversial that co-writer Damon Lindelof ended up issuing a pseudo apology for it on Twitter. Instead of being a new complex female character to add to the male-dominated Enterprise crew, Carol was seen as little more than an objectified, unimportant character.

Still, as a significant player in the original canon as the mother of Kirk's child, it seemed natural that despite the controversy, Carol would return for Star Trek Beyond. And, by all accounts, that was the plan. So, what changed? "The decision to bring back Alice — I don't really know what that was about," Chris Pine said recently in an interview with RCN TV. "We all love her, and she's a great part of the franchise, and I'm sure we'll make a return if and when we make another film." Based on Pine's answer, it seems that Eve herself had nothing to do with the decision not to bring Carol back. (Bustle has reached out to Paramount for comment about Carol's absence in the film).

However, that's not to say that there wasn't another reason Carol lost her spot on the Enterprise — it just might not have had to do with her character in particular. In December 2014, Roberto Orci, who had signed on to direct what was then known as Star Trek 3, left the project in early stages of pre-production. After Orci exited the project, Paramount found a new creative team to helm the third Star Trek movie and get it ready in time for a 2016 release date to coincide with the 50th anniversary of the original series. That new team — co-writers Simon Pegg, Doug Jung, and director Justin Lin — essentially chose to gloss over the events of Into Darkness, and that, sadly, included leaving out Carol.

In an interview with /Film, Lin hinted that early drafts of the Star Trek Beyond script included plot points from Into Darkness, saying, "There were many iterations where we did go and explore ... In the presentation of the film, it didn't quite fit in." It's safe to assume that Carol was just one of the pieces that "didn't quite fit" in Star Trek Beyond. Eve herself seemed aware that the creative shakeup would affect the future of Carol Marcus when she spoke to Bustle in 2015. "I'm definitely still talking to J.J. [Abrams, director of Into Darkness] about where Carol is and her future and where we can take her," she said, adding, "this film is not necessarily J.J.'s film."

There's still hope, though, that Carol and Eve will return to Star Trek someday. A fourth Star Trek film has already been announced, and if Chris Hemsworth's George Kirk can come back from the dead to star in it, I'm thinking Carol can possibly make a comeback too.