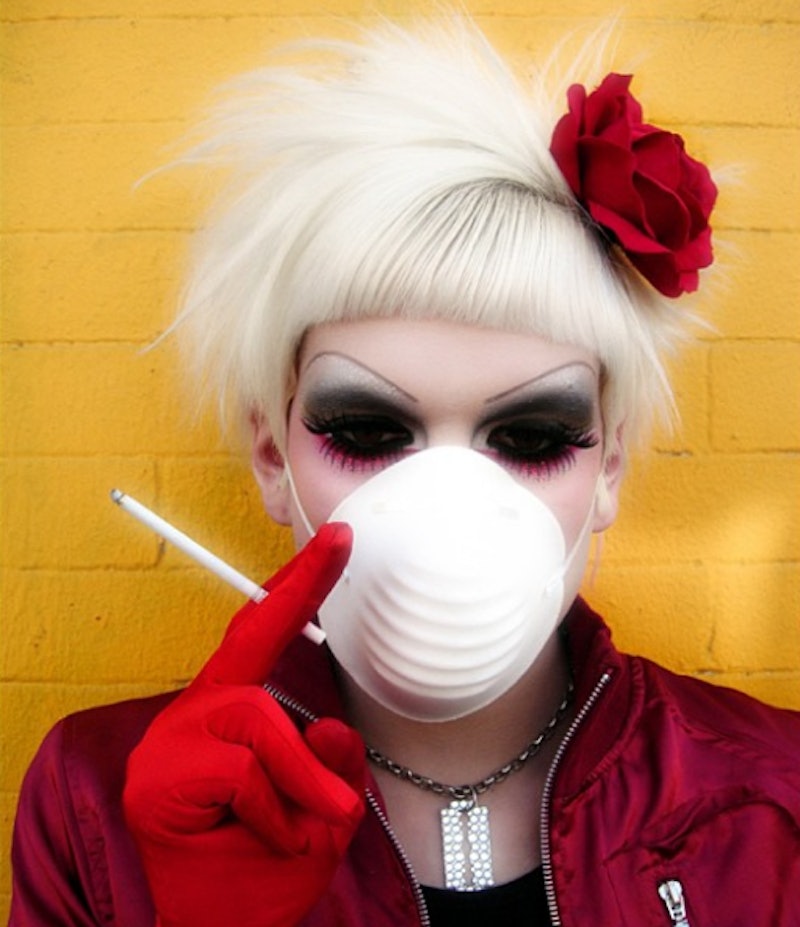 Transitioning from emo to scene style in the early 2000s was a big deal within my friendship group: It had to be done over a period of time that made it seem like a natural progression. Although these subcultures were inextricably linked — and arguably, scene evolved out of emo — those involved in each individual scene were often adamant about the differences between the two. They were differences that came, primarily, from what we wore.

Although similar to the untrained eye (like my mom, for example), there were many ways that the emo and scene subcultures and their corresponding styles were totally different. They definitely influenced and inspired each other. But, as with any teen aesthetic, we wanted to believe we were unique in how we were presenting ourselves. That's what made all the differences between emo and scene seem so important then, and what makes them all the more fun to look back on now.

After all, these scenes were all about avoiding the mainstream while cultivating strict style rules all of their own. There's no doubt about it now, though: We all did look the same, no matter how unique we were trying to say we were. Still, reminiscing on our childhood mistakes is always a delight. And what's even more fun still is analyzing the differences that were oh-so-important between the two subcultures at the time, even if they're probably not as noticeable now. These are 11 of them.

Where emo kids' clothing palettes primarily consisted of black, more black, and red eyeliner, scene style was all about bright, often fluorescent hues. That's probably why scene kids were often — and incorrectly — referred to as "colorful emos" by those not on the scene.

As an emo kid, my obsessions were with Emily The Strange, The Nightmare Before Christmas, and all-around gothy characters. As a scene kid, buying and wearing children's accessories and My Little Pony T-shirts was all the range.

While emo hair focused on big bangs that often obscured half of your face, scene kid hair had to rest at least three inches above the top of your head. Achieved through a hell of a lot of backcombing and hairspray, this hairstyle left our manes with a nice, crispy texture.

As well as being teased to hell and back, scene hair drifted away from the traditional jet black color that emo stuck resolutely with. Which often meant those going from emo to scene got to add extra damage to their hair by bleaching the heck out of it in order to get rid of the black and move onto more neon shades.

Scene style glamorized guns, knuckle dusters, and bedazzled knives in a way that no other subculture I can think of ever has. By combining glitter aesthetics with weapons, scene kids wanted the world to know they weren't going down without a fight.

Because scene came after emo, scene kids were (typically) older than the standard emo age. Because of this, sexual politics came into play in a way that they just hadn't before. Through suggestive lyrics in scene music — like the above song by The Medic Droid — and more revealing clothes, teens were embracing and revealing their bodies in a way that challenged a society that was obsessed with youthful bodies anyway.

7. The Subtle References To Each Other

Similarly, however, scene influenced emo. The two subcultures existed side by side for a reason and whenever a trend infiltrated emo, you'd often see it again in scene — and vice versa.

For scene kids, makeup left the realm of solid black eyeshadow and red eyeliner that looked suspiciously like pink eye and entered a time of OTT eye makeup looks.

Just as scene makeup was more diverse than its emo counterparts, so too was scene clothing. Although skinny jeans were still heavily encouraged, colorful skirts and tights were equally embraced.

10. No Glasses Versus Nerd Glasses

Glasses without the lenses — or "nerd glasses," as they were lovingly called here in the U.K. — were utterly pointless but still worn by scene kids everywhere. Before they became a hipster staple, actually.

Exaggerated accessories, 20 different hair bows at once, and a million bracelets were definitely in when it came to scene style. The brighter the better.

Hopefully this trip down memory lane has been as rewarding — and hilarious — for you as it was for me. Although I don't miss looking like a cartoonish idiot, I do kind of miss having style rules to follow for my wardrobe. It made getting dressed and feeling stylish a hell of a lot easier, after all.

More like this
The Chicest ’90s Updo Hairstyles To Try
By Paris Giles
13 Memorable Beauty Moments From Paris Fashion Week S/S 2023
By Olivia Rose Ferreiro
13 Vampy Nail Ideas Perfect For A Moody Manicure
By Jordan Murray
TikTok's "Would I Look Good With Short Hair?" Hack Is Genius
By Olivia Rose Ferreiro
Get Even More From Bustle — Sign Up For The Newsletter