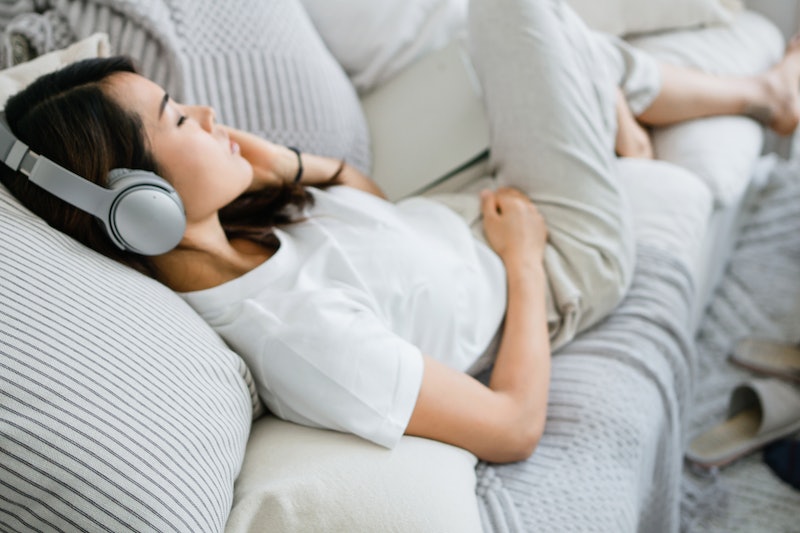 If you've ever had difficulty falling asleep, someone may have suggested the concept of white noise to you. White noise is essentially background noise of a particular frequency that helps break up the silence and let your mind settle down so you can get some rest. In a similar vein, pink noise also exists, and it's getting a lot of research attention lately. You might be wondering: What is pink noise, anyway? The good news is that it might help with your sleep problems — and, indeed, it might even be more beneficial than white noise.

On that subject, let's briefly review white noise before we get into its more colorful cousin. According to Popular Science, white noise is a "consistent noise that comes out evenly across all hearable frequencies"; it can also be described as "a gigantic band all playing a slightly different note." White noise creates a masking effect which block out the sudden changes in noise that can disturb light sleepers or people who are struggling to fall asleep in the first place — which is why it's often cited as a remedy for sleeplessness or as a staple of good sleep hygiene.

Interestingly, it's generally not the actual noises that bother us, but more so their shift from what we've been used to hearing. This is why, for example, noises that don't bother you much during the day — the faucet dripping, or your cat cleaning itself, for example — suddenly become your worst nightmare at night. The drip of a faucet doesn't sound like much by day, when it's surrounded by other noises; when everything is quiet at night, though, a drop of water falling into a sink can be as disturbing as a stack of plates crashing to the floor.

So, how is white noise different from pink noise? According to Live Science, white noise and pink noise are similar in that they're both audible to humans. Beyond that, they differ because white noise has an equal power per hertz throughout all frequencies, while for pink noise, the power per hertz decreases as the frequency increases. In general, pink noise is used to test loudspeakers and equalize sound equipment for music. Recently, it's even been used as background noise in offices, as some research suggests pink noise increases productivity and creativity.

And one of pink noise's other benefits, it turns out, has to do with sleep/ According to Prevention, pink noise slows down your brain waves and also helps regulate them, giving you a steady, long sleep. In a recent research study appearing in Neuron, German scientists monitored the sleep of 11 patients for two nights. Before bed both nights, subjects were shown 120 pairs of words. Then, when subjects reached deep sleep one night, researchers played pink noise in the background. The other night, researchers played no sound at all. Upon waking after both nights, the participants were then tested on how many they remembered.

While researchers found that playing pink noise did not cause the subjects to experience deep sleep cycles more frequently, it seemingly prolonged their deep sleep cycles and enhanced their memory: After listening to pink noise, subjects remembered an average of 22 word pairings, versus 13 after the night of no pink noise. A key factor in this experiment was the fact that the frequency of the pink noise sounds were in sync with the subjects' brain waves — and this, the observed cause-and-effect relationship suggests that pink noise could be used to positively impact sleep in general, as well as concentration and other brain activity when we're awake. Pretty cool, right?

What are examples of pink noise you could listen to at home? If you're someone who likes to sleep with a fan on in their room, you're already enjoying pink noise. Other examples of pink noise would be listening to a steady rain fall or the wind, both of which you can recreate by downloading an app or streaming the sounds from your phone or computer.

So, there you have it! Whether or not pink noise works for you, it's always important to examine your sleep schedule and make sure you're getting enough rest. After all, sleep is fundamental to good mental, emotional, and physical health.