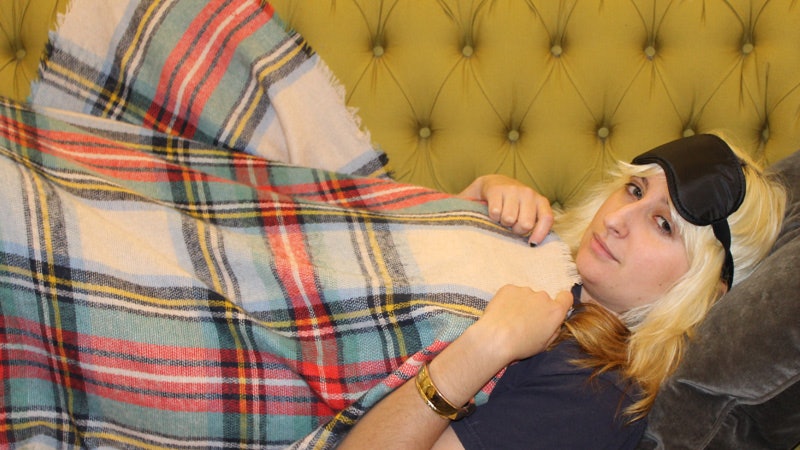 My year of being unable to sleep started with a cough. I woke up one night coughing wildly — that kind of choking cough you get when you hold your breath underwater for too long. I walked to the bathroom, wheezing so hard that I was afraid that I would vomit, and drank a few glasses of water, sputtering half of them across my shirt. After the coughing died down, I got back into bed, and found that I was wide awake. I didn't fall back asleep for hours.

It happened again the next night. And again the next night. Then, just as suddenly, as it appeared, the cough disappeared. But by that point, it didn't make much of a difference. I was now waking up at 4 a.m. for no reason, and staying distracted by my own tortured thoughts until sunrise, nearly every single day.

While up late one night googling about insomnia (as insomniacs are wont to do), I learned about sleep hygiene theory. Sleep hygiene proposes that certain habits (exposure to electronics, irregular bedtimes) confuse our bodies, and lead to poor quality sleep; certain other habits — a regular bedtime, regular exposure to natural light — lead to higher quality, more consistent sleep. I was, of course, filled with impotent rage. Here I am, strung out on Lunesta and Klonopin like frickin' Keith Richards, losing my mind from only sleeping 20 hours in a week, and you're telling me that my problem is watching TV? If sleep hygiene were a person, I would have punched it in the face.

And yet, as my sleep quality remained choppy — a solid seven hours one day, four piecemeal hours the next, despite my continual slavish devotion to Lunesta — I wondered if I wasn't fighting sleep hygiene out of a misplaced sense of martyrdom. Was I so wrapped up in the idea of myself as a helpless victim unfairly suffering through this torment, that I was reluctant to actually take a stab at improving my situation?

The Experiment: With that in mind, I spent two weeks trying seven different sleep hygiene-based insomnia cures. I promised myself that I would try them earnestly, and stick to them as well as I could, even though a sizable part of me wanted all the cures to fail, so that I could be right. Tired, but right. Here's what happened.

Why it's supposed to work: A 2010 study recommended moderate exercise like walking for insomniacs, rather than, say, running, or doing the elliptical machine. The idea is to be physically engaged during the day, but not to physically exhaust yourself. Experts suggest exercising for 30 minutes at a stretch, and making sure that you don't work out too close to bedtime, just in case you're someone who is flooded with wakeful energy after a gym visit.

What I Did: I walked at a medium pace for about twenty minutes during lunch and after work, for a total of forty minutes, three times a week, for two weeks.

Walking helped me sleep when I didn't have anything else on my mind; on nights when I felt otherwise calm and relaxed, walking seemed to make the difference between waking up, say, three times — and only waking up once. However, on nights when something was on my mind, all the relaxed-yet-brisk strolling in the world didn't seem to make an impact on my sleeping problems.

What It Is: Your crunchy roommate may have recommended keeping a "worry journal"— a dedicated notebook just for writing down the things that are making you nervous. The principle behind a worry journal is that writing down your worries externalizes them, taking them out of your brain, and making you less likely to have them jump to mind if you wake up for a moment in the night (which most of us do). Advocates suggest you write for half an hour, several hours before bed.

Again, writing my problems into a notebook seemed to work — except when it didn't. For two out of the six nights, I was shocked to find that I slept deeply despite being enmeshed in some petty personal drama, the details of which were forgotten by the morning.

But on the other four nights, writing down the things that upset me didn't take away their power to wake me — in fact, in at least one case, probing my brain for the things that bugged me actually made me feel more upset and unable to sleep than I had before.

3. Not Using Electronics Before Bed

What It Is: As any of you who are into reading the killjoy "health" section of websites know, using electronics before bed is bad for your sleep. Mountain Dew: Code red-level bad for you. A 2014 scientific study found the people who used electronics with glowing blue screens before bed had a harder time falling asleep, were less alert after sleeping, and produced less melatonin, the hormone that helps us fall asleep. Scientists advise putting away your phone an hour or two before bed, instead of arguing with strangers on Facebook late into the night.

What I Did: I really, really tried to not use any electronics for two hours before bed. But it never completely worked. I'd be doing great, feeling really smugly low tech about reading a paper book in bed, when I'd realize that I'd forgotten to set my alarm. Which is on my phone. Bam! Blast of blue light to the face.

And once that happened and everything was ruined anyway, why not just check my email? Even after I got an app for my phone that turned the screen's blue glow into a pink hue in the evening, I always forgot my alarm until the last second, and always ended up dicking around on the Internet for a few minutes. It was as if I was subconsciously afraid that this might actually work for me.

Honestly, I did feel like the light filter helped me sleep better. I still woke up in the night, but fell back asleep a bit more quickly on nights when I used the filter. And while I did keep checking my email until perilously close to bedtime, feeling bad about doing it made me less likely to start writing replies, which typically really gets my brain going.

4. Sticking To A Regular Bedtime

What It Is: In the depths of my sleep-deprived madness, I saw a very rude sleep specialist. He told me "all you need to do is go to bed at midnight and wake up at 7 a.m. for six weeks, and you'll be fine." Considering the shape that I was in at the time, I think I genuinely deserve an award for not just eating his face right then and there. But consistent bed times are a bedrock of sleep hygiene theory — the idea is that developing a series of habits will help your body get the signal that it is "time" to go to sleep.

I learned something surprising from having a bedtime — no matter when I decide "It's bedtime!," my body doesn't want to fall asleep until 12:45. Prior to this experiment, I usually bopped around the house until 12-ish, and then fell asleep a little before 1 a.m.. During this experiment, I got in bed at 11:30 and then just read or otherwise goofed off until a little before 1 a.m., when I actually fell asleep.

This was an intriguing bit of self-knowledge that may have helped me eat, pray, and/or love. But it did not, however, help me sleep.

What It Is: Caffeine can stay in your system for six hours after you consume it. So drinking it late in the day is a roll of the dice; roll wrong, and you be struck awake by the gods of insomnia and forced to spend five hours watching Family Guy on TBS in the middle of the night. Doctors advise that insomniacs steer clear of anything caffeinated after 2 p.m.

What I Did: I didn't have caffeine after 2 p.m. at all for two weeks.

How Much It Helped: N/A

After my first week, I actually realized that I couldn't remember the last time I had consumed caffeine after 2 p.m. But it was nice to know there was at least one thing I wasn't doing wrong in the first place.

6. Only Using The Bed For Sleep

What It Is: Much like having a consistent bedtime, using the bed only for sleep is supposed to help forge a connection in your mind between sleep and your bed, one that will then help you fall asleep more quickly. Followers of sleep hygiene are supposed to do nothing in bed but sleep or have sex — (though doesn't the sex part seem kind of random? Were they worried that people would freak out if they directed you to have sex on the kitchen table until your insomnia passed?)

What I Did: I live with my boyfriend in a fairly small New York City apartment, wherein our bed is a place to sleep, watch TV, hang out, do work, and, on occasion, eat pizza. The simple act of avoiding our bed became an Olympic-level event, and one that I did not earn the gold in. I'd be sitting there, reading in the chair, when suddenly, I looked down and realized that I was now sitting on the bed. It was like having a very crappy superpower.

In a week of trying very, very hard, I managed one full day of actually not sitting on my bed before bed, which wasn't enough to see results.

How Much It Helped: N/A. Because I failed.

Every night, as I went to bed, I found myself obsessing over my own inability to not hang out in bed — which certainly couldn't have helped my sleep patterns. But then I wondered, was it worth it? Cuddling with my boyfriend in the middle of the day is one of the greatest pleasures of my life — maybe I wasn't actually willing to give up those comforting moments of human touch for better sleep.

What It Is: When you wake up in the middle of the night, doctors do not recommend my preferred tactic, which is lying silently on your back and mentally updating your enemies list until daybreak. Rather, doctors recommend that you get out of bed and do something calming, like reading, until you feel tired and able to fall back asleep.

What I Did: When I woke up at 4 a.m., instead of spending 20 minutes freaking out and then dragging myself to the other room to listen to podcasts and pity myself, I read a boring book until I felt sleepy.

Reading was the only unadulterated success of the experiment. I woke up wide-awake twice in the middle of the night over the course of this experiment, and both times read my book, and fell back asleep within twenty minutes.

My Conclusion: Two weeks later, I'm still walking every day, journaling before bed sometimes, and making pathetic attempts to not look at my electronics two hours before bed. And I am sleeping a little bit better than I did at the start of the experiment.

Taking these sleep hygiene steps didn't just confer whatever benefits they're supposed to — they also reminded me that I have more control over my body and my life than I thought. Which, in some ways, is scarier to me than being stuck awake all night, fuming at the universe.

More like this
The 5 Best Pillows For Acid Reflux, According To A Sleep Expert
By Maria Cassano
Here’s Your Daily Horoscope for December 7, 2022
By Mecca Woods
13 Gifts From Latina-Owned Businesses For Everyone On Your List
By Marilyn La Jeunesse
The Justice Tarot Card Could Mean A Proposal Is Coming If Paired With These Cards
By Kristine Fellizar
Get Even More From Bustle — Sign Up For The Newsletter