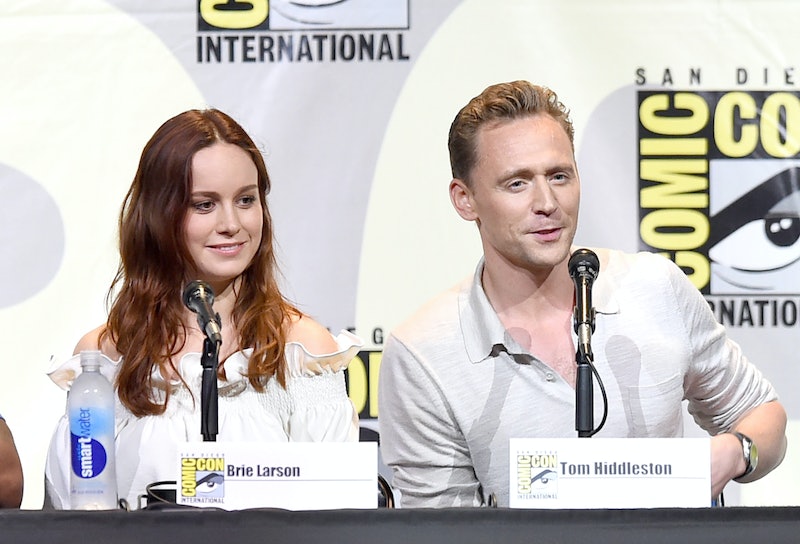 In case you missed it, Marvel is about to make a big leap in a positive direction. During San Diego Comic Con, they officially announced a Captain Marvel movie is on its way. Why is Captain Marvel so important in the MCU? Well, because the "Captain" at the center of this story is an amazing woman, Carol Danvers. A wise-cracking fighter pilot with alien DNA, Carol is the cheeky female badass that has worked with the Avengers and the Guardians of the Galaxy (is Danvers the key to how the MCU will connect?). Basically, Carol is new your favorite superhero. This marks Marvel's first female-led superhero film, yes, but this is also the studio's chance to really make some groundbreaking choices in their casting and production decisions.

While Oscar-winning actress Brie Larson will play Captain Marvel, fans are still waiting to hear about all of the other fun details of the film: synopsis, supporting cast, big bad, etc. The most crucial piece of the puzzle that is yet to be confirmed is who is directing this landmark film. Naturally, the conversation has drifted towards possible directors, and I think that this is one casting decision that should not be taken lightly. Captain Marvel needs to take a page out of the Wonder Woman playbook and cast a female director immediately.

As Marvel works itself out of the non-diverse corner it has unconsciously painted itself into over the years, the announcement of both Captain Marvel and the equally as thrilling Black Panther films are a push in the right direction. With the ostensible end in sight for many established individual stories (the solo Iron Man, Captain America and Thor are all in "winding down" mode now), the need to bring other Marvel characters to the big screen is pressing. It's certainly a major bonus that the diverse roster of upcoming films feature strong characters as well as actors to portray them, but it's also vital that the directors to helm them are reflective of that push. One of my favorite directors of the moment, Creed's Ryan Coogler, is already locked onto Black Panther. In that respect, Captain Marvel's need for a female director is so important.

I won't speculate on which particular female director is best for the role. That's just too unfair to the plethora of women working in the industry who are all equally capable of tackling Captain Marvel. What I will reflect on, though, is the fact that Marvel needs to follow DC/Warner Bros.' lead when it came time to choose a director for Wonder Woman. While there have been other DC female superheroes to get the solo film treatment (remember Elektra and Catwoman?), Wonder Woman went into production in a very different time. Not only with a more conscientious push to spotlight female superheroes, but in an era where the public's recognition of which studio is championing female voices is at an all-time high. The demand for Wonder Woman's story to be adapted appropriately for the big screen meant that getting female visions to guide it to success was crucial.

Gal Gadot recently commented on why Wonder Woman director Patty Jenkins is so vital to the project:

[The movie is] a story about a girl becoming a woman. I think only a woman, who has been a girl, can be able to tell the story in the right way. I’m lucky in that I’ve worked with men who have a lot of respect for women. But working with a woman is a different experience. It feels like the communication is different. We talk about emotions.

Gadot is not wrong in the slightest. There is intrinsic value is speaking to the truth of a character when the person shaping that character's portrayal onscreen can sympathize. The power a director has in a film is crucial when it comes to weighing the pros and cons of sympathy versus empathy. Plenty of male directors have directed women toward delivering standout performances. But their world view is more in line with an sympathetic view, where they may not be able to fully insert themselves into female experiences and viewpoints that would be foundational to the creation of a female character. A female director could be more predisposed to a empathetic viewpoint, thus allowing for a deeper understanding of what it takes to draw out the best female performance necessary.

Moreover, Marvel stands to gain a lot of positive trust from the public and positive publicity from hiring a female director. It would be a big first for the studio, especially since they came very close to sealing the deal with director Ava Duvernay coming aboard Black Panther . I certainly don't think the hiring of a female director should be some superficial PR grab. Of course, Marvel should hire with purpose. But a female director will add so much dimension to Captain Marvel and the MCU as a whole. With a new era for the MCU on the horizon, a female director for Captain Marvel aligns with the new ethos.

In the meantime, please enjoy this celebration of a selection of the current MCU's amazing female lineup, courtesy of Black Panther star Lupita Nyong'o. Can you feel the girl power yet?