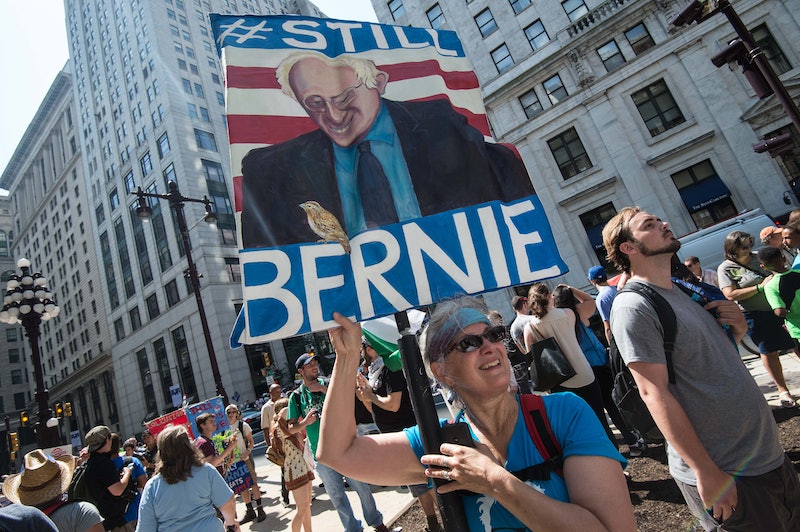 The 2016 Democratic primary has been anything but smooth. The outsider candidacy of Sen. Bernie Sanders posed a surprising challenge to the more mainstream bid of Hillary Clinton, and some of his more impassioned supporters are not prepared to follow his lead in supporting Clinton in November. The situation became even more rocky in the days leading up to the Democratic National Convention, as leaked emails between Democratic National Committee officials exposed bias against the Sanders campaign throughout the primaries, bolstering his supporters' claims that the election was unfairly tipped to Clinton from the get-go. Hours before the convention's beginning on Monday, Sanders asked his delegates to support Clinton and her vice presidential pick, Tim Kaine. Their reaction did not bode well for party unity.

Addressing his delegates in Philadelphia, Sanders began by enumerating the campaign's victories (steering the party's official platform to the left and reducing the number of superdelegates in future primaries), and encouraging his supporters to continue fighting for opposition to the Trans-Pacific Partnership and support for single-payer health care (two areas Sanders' delegates to the platform committee were not able to press forward on). The boisterous cheering from the crowd transitioned into booing the moment Sanders said, "We have got to elect Hillary Clinton."

The theme of Monday's proceedings is "United Together." But Sanders' booing delegates suggest that unity may not be achieved at the convention, as not all of his supporters are willing to do what Sanders himself has done and get behind Clinton. Sanders pleaded with his dissenting delegates, arguing not on the grounds of Clinton's merits but of Republican nominee Donald Trump's flaws, with sobering realism: "Brothers and sisters... this is the real world that we live in," he said.

In response, the delegates chanted, "We want Bernie."

The energy and the resistance exhibited at Monday's gathering are cause to believe that Sanders' delegates will actively defy the "United Together" theme throughout the convention. There will likely be clashes on the convention floor over the adoption of the platform, as well as during Tuesday's roll call vote, where the nomination will be made official.

However, Sanders' delegates do not appear to have lost heart in their candidate of choice, despite his decision to back Clinton. As Sanders wrapped up his address and exited the stage, his delegates chanted loudly, "Thank you, Bernie." They are showing that, though they are not following Sanders' every move going forward, they're grateful for the movement he began, and they plan to continue working toward progressive goals in their own ways.