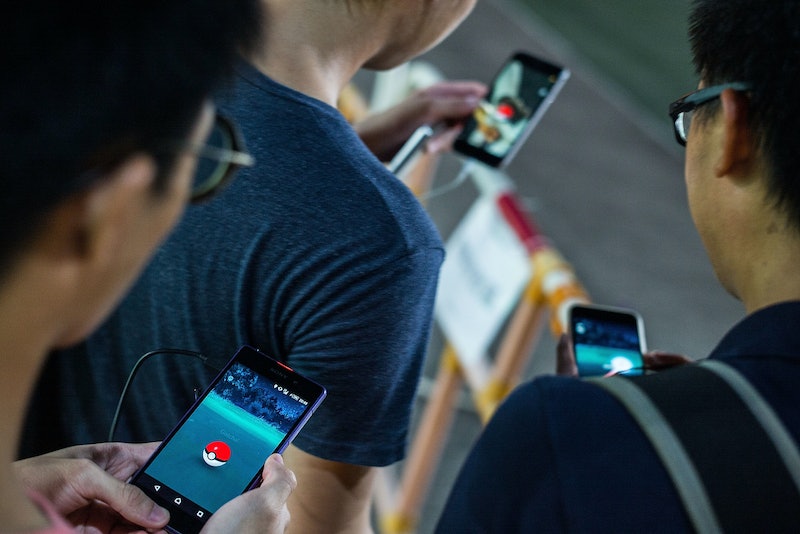 Remember a few weeks back, when CEO John Hanke of Niantic, Inc., developer of the hit augmented reality game "Pokemon Go," said that trading Pokemon might eventually be added to the app? Now, Hanke has teased an update to "Pokemon Go" that includes not only trading, but also a host of other notable features. At a panel at San Diego Comic-Con (SDCC) last weekend, Hanke mentioned that Niantic is planning on investing plenty of time and money into "Pokemon Go's" future success — which is no surprise, given the game's immense popularity.

So what will be in the "Pokemon Go" update? Although the game has plenty of the mechanics that made the original Pokemon adventures so fun, like catching wild Pokemon, gym battles, evolution, and egg hatching, many are still currently missing. Chief among them is the ability to trade Pokemon with other Trainers, which we already know will potentially appear in an update, thanks to an interview with Hanke at Tech Insider from shortly after the game's launch. Others include the rest of the Pokemon ("Pokemon Go" draws on 150 critters from the first generation, but there are currently 722 in total) and Pokemon breeding. More practical updates, like Pokestop customization, are also on the table.

Personally, I'd like to see a redesign of the XP system and the addition of a friends feature. XP rewards in "Pokemon Go" tend to be sort of imbalanced; for example, you get the same amount of XP (100) for catching a CP 10 Pidgey and a CP 500 Pinsir, even though the Pidgey is an easy score and the Pinsir might clean you out of your entire supply of Pokeballs. As you get closer to the maximum level of 40, it becomes harder and harder to increase your XP count for this reason. And as far as a friends feature goes? There's no denying the social aspect of the game; indeed, "Pokemon Go" has already begun inspiring bar crawls and park adventures across the country and the world, which facilitate conversations between fans. (Where I live, the local art museum has become a 24/7 hangout for Pokemon Trainers to chat and sit in the sculpture garden while they catch Pokemon, which I love.) Why not have an in-game social dimension so that players can friend each other, have double battles like in the Gameboy games, and organize gym takedowns?

But that's just wishful thinking on my part, so let's take a look at something a little more concrete. Here are some of the most exciting aspects that Hanke and Niantic have suggested we may see in upcoming versions of "Pokemon Go."

You can't currently trade in "Pokemon Go," but since players have been complaining about the absence of trading ever since day one, this was the first feature that Niantic confirmed as a future addition. Trading means that you'll be able to swap your extra Tauros for your neighbor's Scyther. It's an enjoyable and social feature that hearkens back to Pokemon Red, Blue, and Yellow, where you had to trade certain Pokemon to make them evolve.

My first thought was that we'd get to change the appearance of Pokestops. No such luck, unfortunately, but what Hanke explained certainly has merit: According to the Niantic CEO, you'll be able to add specific kinds of Lures to Pokestops in a future update. For example, if you're trying to catch a Pikachu or a Voltorb, you can pop an Electric Lure onto a nearby Pokestop and wait for the Pokemon to come to you. Other ways you'll be able to customize Pokestops include turning them into temporary healing centers, making them the "Pokemon Go" equivalent of PokeCenters.

You thought it was difficult to "catch 'em all" when "all" was 150? Think again, my friend. Each new generation of Pokemon games has added new monsters to the Pokedex over the years, making the total count something like 720 at the current moment (the exact number depends on who you're asking). Apparently "Pokemon Go" will debut critters from games like Silver, Gold, Ruby, and Sapphire at some point, so if you see a Hoothoot or a Plusle running around your neighborhood in the months to come, don't be confused; your Pokedex may have just gotten a makeover.

Starting with the second generation of games, one of the more delightful features was breeding. You could leave two of your Pokemon at a time at the Daycare Center, and if they were compatible, they'd produce an egg. You could then hatch this egg by walking a certain amount of steps, just as in "Pokemon Go." The offspring could inherit certain movesets and stats that they wouldn't have had in the wild, so this was a way to produce more powerful Pokemon. That might be why Hanke told fans at a SDCC Q&A session that the "Pokemon Go" team had considered adding breeding as a feature. He didn't, however, say whether the team was actively working on it or not.

But we'll find out about that feature, as well as all the others, when Niantic eventually rolls out its update! Until then, stay tuned for more news about what that update could include.