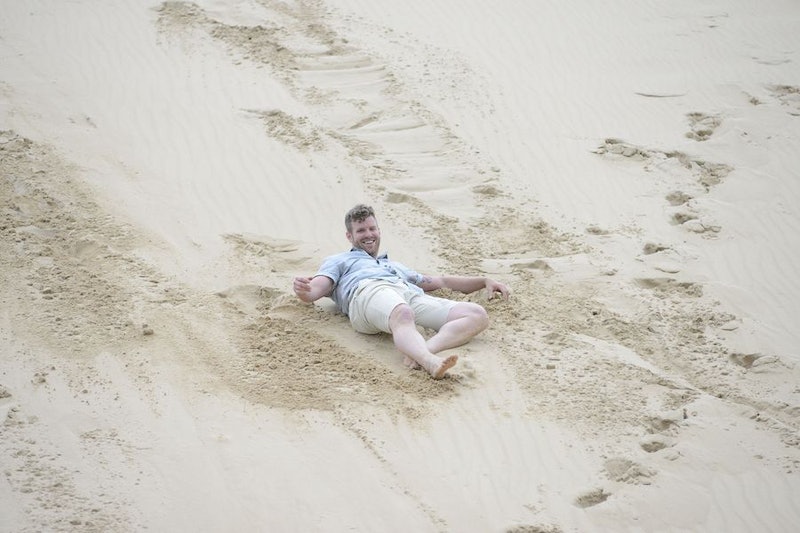 I think I speak for everyone when I say that it was absolutely devastating to see James Taylor eliminated from The Bachelorette . Not only was he an incredibly sweet guy, but he also made no qualms in expressing just how much JoJo meant to him. He fell in love with her and was growing more and more confident of their relationship together. So when he failed to receive that highly-coveted rose, he was both shocked and heartbroken, as was the rest of America. But just because this former suitor has left our television screens, doesn't mean we still aren't invested in his love life. So is James Taylor dating anyone since leaving The Bachelorette ? It's recently been brought to our attention that he may no longer be living the single life. Bustle has reached out to Taylor for comment and is waiting to hear back. (Update: James Taylor has responded to the speculation about his love life, telling Bustle, "I am definitely still single." So it's not too late, ladies. Go get him!)

Earlier in July, Twitter user, AG, posted photos on the social media site that seemed to show James Taylor making out with a woman on a bench shortly after filming The Bachelorette. Keep in mind, this was revealed prior to his departure from the show, so it offered very little hope for his future with JoJo and made the whole thing just kind of depressing. But now that some time has gone by, I can start to appreciate what this could potentially mean for this fan-favorite contestant. Things may not have worked out with JoJo, but if these pictures are any indication then it seems this country boy hasn't given up on love just yet.

Granted, these photos are pretty blurry, so it's hard to completely confirm that it is him, but if it is then I'm happy to see him having some fun, especially after the rollercoaster ride of emotions he's been put through lately. You could tell he was not expecting to be sent home that week, so it basically came way out of left field, which makes the heartache even more difficult to bear. This could case some people to emotionally down and close their hearts to relationships for a while. But I should've known James Taylor would be different.

If he really is seeing this mystery lady, then it's likely that has hasn't written off love just yet. He deserves to find someone that appreciates and loves him for the great guy that he is. Clearly, JoJo wasn't the one, and hey, maybe this girl isn't the one either. But as long as he hasn't given up hope, I'm sure he'll eventually be able to find that happily ever after he's been searching for. We're rooting for you, James T.!