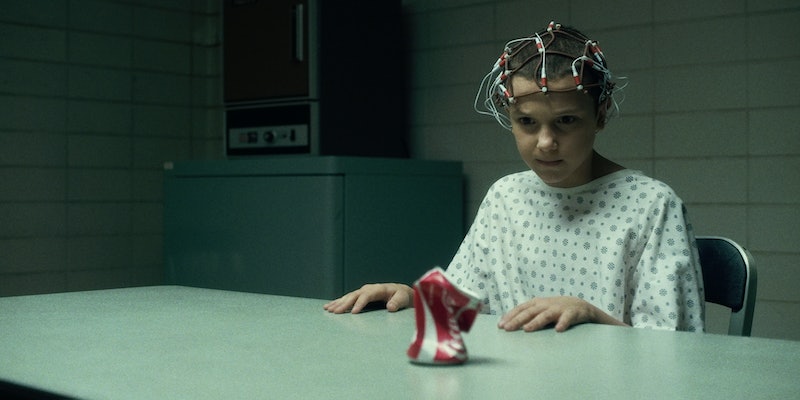 Having superpowers seems fun, but the reality is that there would probably some consequences — and I'm not talking about the Sokovia Accords, Marvel fans. The telepathic girl on Netflix's latest streaming series is putting herself at risk every time she saves the day. Without spoiling too much from the end of the season, why does Eleven's nose bleed on Stranger Things ? When she uses her powers, there are some physical side effects.

Stranger Things reveals pretty early on that Eleven, played by Millie Bobby Brown, can move things with her mind. However, when she attempts a particularly difficult task and exhibits a lot of effort, her nose bleeds and she feels drained. Why is that happening? It's not uncommon for a kid to get a nosebleed, but this seems like a pretty direct cause and effect. I don't think Eleven has an infection or a brain tumor or anything. Stranger Things may, in the finale, draw certain parallels between Eleven and Hopper's cancer-ridden daughter, but I don't think the nosebleeds are a sign of anything to come. Personally, I think the girl is putting her brain through so much stress and trauma that that's causing her nose to bleed. She could be giving herself minor aneurysms, but that's a little extreme.

Why is this significant? Instead of an impending health hazard, I think the reason Stranger Things calls attention to Eleven's nosebleeds is that it means she wasn't necessarily born with all of her powers, or isn't being allowed to develop them naturally. Caleb speculates whether El was born with her powers, like the X-Men or acquired/was given them like Green Lantern. I think it's a combination of both. Her natural supernatural abilities have been stretched to the limit by Dr. Brenner and his team.

On the other hand, the nosebleed and exhaustion are basically the extent of her power's side effects. She can recharge with time, and doesn't have any lasting injuries. Maybe her powers aren't dangerous and this is just an occupational hazard. This is all the more that will hopefully be answered if and when Stranger Things returns for a Season 2.

More like this
Kate Bush Revealed The Real Meaning Behind 'Running Up That Hill' Lyrics
By Darshita Goyal
Nicola Coughlan Shared A Lady Whistledown Excerpt From ‘Bridgerton’ Season 3
By Grace Wehniainen, Alyssa Lapid and Sam Ramsden
'Elite' Season 6 Is Arriving Sooner Than You Think
By Gretchen Smail and Grace Wehniainen
Devi Is Going To Meet A “Smoldering Bad Boy” In ‘Never Have I Ever’ Season 4
By Jack Irvin and Gabrielle Bondi
Get Even More From Bustle — Sign Up For The Newsletter