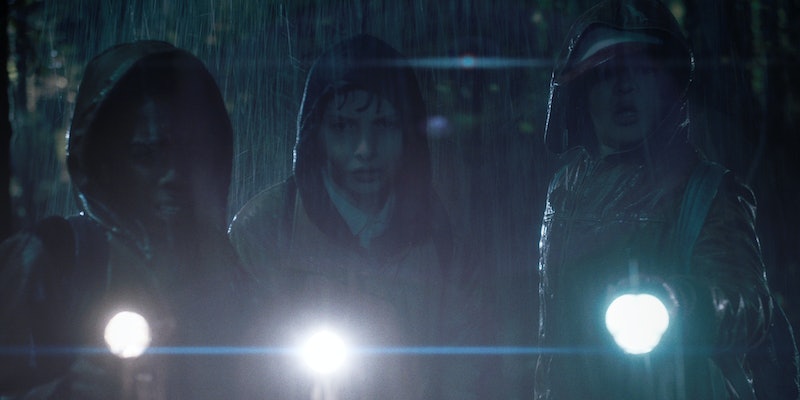 Netflix's freshman series Stranger Things repackages a lot of popular media into a brand new concoction, borrowing visuals from Spielberg, story from Stephen King, and characters from just about every '80s high school movie. One of the strongest elements of Stranger Things that defines it against a sea of similar horror-based shows is its unique design — especially that of the dark and terrifying Upside Down world. The Upside Down is inhabited by a horrific creature that seems to have a thirst for blood, but is this creature an invention of the show or did the Stranger Things Monster already exist?

Luckily, unlike most horror films nowadays, Stranger Things isn't "based on a true story," meaning there's absolutely no chance you'll be dragged away from a high school party into some indescribable parallel netherworld while sitting alone on a diving board. While the Monster is a unique creation designed specifically for what the writers of Stranger Things intended, that doesn't mean that it didn't have some very famous influences on its design. The showrunners and monster designer eventually decided on the final product, which they told Entertainment Weekly was a "unnaturally thin monster with no face, long arms, and a head that opens up like a disgusting flower when it’s feeding time."

The Monster may be original, but seeing its inspirations help provide some insight into where the idea for the monster came from. Here are just a few monsters that helped inspire the Monster.

1. The Alien from Alien

The Duffer Brothers, who created Stranger Things, attribute both the film Alien and one of the key designers of the titular alien, surrealist artist H.R. Giger, with serving as an inspiration for the design of the monster. They were not only influenced by Giger's grotesque creation but the fact that the alien itself wasn't computer-animated. The alien was a practical effect that took up real space, which influenced Duffer Brothers' decision to build an animatronic monstrosity.

The Duffer Brothers, in their interview with Entertainment Weekly, also cited the film Hellraiser from director Clive Barker as a major influence on the series, and particularly on the design of the monster. Barker's most famous creation is Pinhead, the main antagonist of the Hellraiser franchise. While both Pinhead and the Monster seem to both be human-type creatures, their similarities end there. The Monster is far more animalistic, while Pinhead is verbose and intelligent. However different, Pinhead's unique design shows that a human-shaped creature can be just as terrifying as something completely unknown.

3. Any Of Guillermo Del Toro's Monsters

It's impossible to talk about modern monster design without talking about Guillermo Del Toro, whose approach to monster making combined horror with whimsy to create perfectly terrifying creatures that also manage to seem like they belong in children's books. This combination of terrifying and approachable shows itself in Stranger Things' Monster, which appears to be almost entirely harmless until it opens its terrifying mouth.

Perhaps the least popular name referenced by the Duffer Brothers when speaking on the Monster's influence is Masahiro Ito. Ito worked on the popular Silent Hill series of video games, designing many horrifying creatures. None of Ito's creations are as bone-chilling, or as recognizable, as the monster known as Pyramid Head, which has gone on to be the de facto mascot of the Silent Hill series. Pyramid Head shares its semi-human form and unnatural skin with the Monster.

Stranger Things borrows from many different sources to create something new and engaging. While all of their influences had similar monsters, none of those stories managed to balance the sheer terror of their monsters with the approachable humanity of likable main characters. The Duffer Brothers could have very easily featured a monster that wasn't too scary — especially since, according to them, many younger child actors were scared of the monster. Instead, they gave their work integrity by not shying away from the Monster's inherent terror, all the while paying tribute to some of their biggest influences.

More like this
20 Photos From The 'Stranger Things' Season 4 Premiere To Make You Feel Old
By Alyssa Lapid
Michael & Kathleen Peterson’s House From ‘The Staircase’ Has New Owners
By Kadin Burnett and Kayla Blanton
Natalia Dyer Just Revealed The Weirdest Thing About Her Charlie Heaton Romance
By Nola Ojomu
What’s New On Netflix: A Victoria Justice Rom-Com & The Return Of David Letterman
By Arya Roshanian
Get Even More From Bustle — Sign Up For The Newsletter