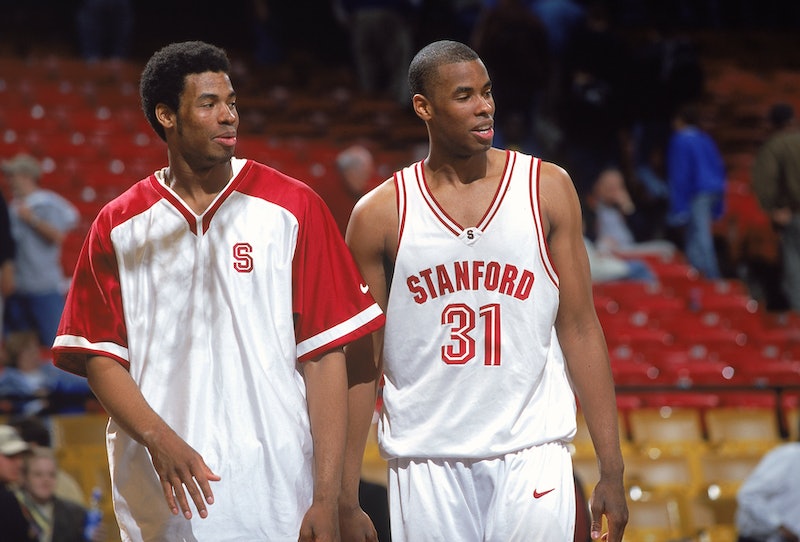 The Democratic National Convention kicked off Monday with the theme, "United Together." Several big-name speakers took the stage, including Sen. Bernie Sanders, Sen. Elizabeth Warren, and First Lady Michelle Obama. Although we'll be seeing a lot more lawmakers at this convention than at the Republican convention the previous week, not all the speakers will be from the world of Washington. On Monday, Jason and Jarron Collins will give DNC speeches. Who are these guys, and why are they speaking at the convention?

The Collinses are 37-year-old twin brothers who have both retired from the NBA. Jarron last played in 2011, and Jason retired in 2014. Yahoo! Sports reported that Jarron is the assistant coach for the Golden State Warriors. Throughout his career, he played with the Utah Jazz, the Phoenix Suns, the Los Angeles Clippers, and the Portland Trailblazers.

After playing with the Brooklyn Nets from 2001 to 2008, Jason Collins was bounced around to several teams before wrapping up his career with the Brooklyn Nets. Jason is best known for coming out as gay in a 2013 Sports Illustrated article, making him the first openly gay player not only in the NBA, but also in any major American professional sport. "I want to do the right thing and not hide anymore. I want to march for tolerance, acceptance and understanding," he wrote. "I want to take a stand and say, 'Me, too.'"

Jarron didn't know that Jason was gay until his brother told him in 2012. He may have taken a few hours to digest the information, but Jarron established himself as supportive quickly. "At the end of the day, this is what matters: He’s my brother, he’s a great guy, and I want him to be happy," he wrote. "I’ll love him and I’ll support him and, if necessary, I’ll protect him."

The brothers' story fits in with Monday's "United Together" theme. Not only do they share a supportive bond, but Jason's coming out allowed him to openly unite with the gay community and pursue the activism he desired. In the days leading up to the convention, Jason retweeted several tweets critical of Donald Trump, including:

Jarron is a less prolific tweeter, but he did share the following:

The Democratic Party frequently touts itself as the party that represents the LGBT community, in contrast to the Republican Party's efforts to curb LGBT rights with religious liberty amendments and bathroom bills. Jason and Jarron's DNC speeches will amplify that narrative.