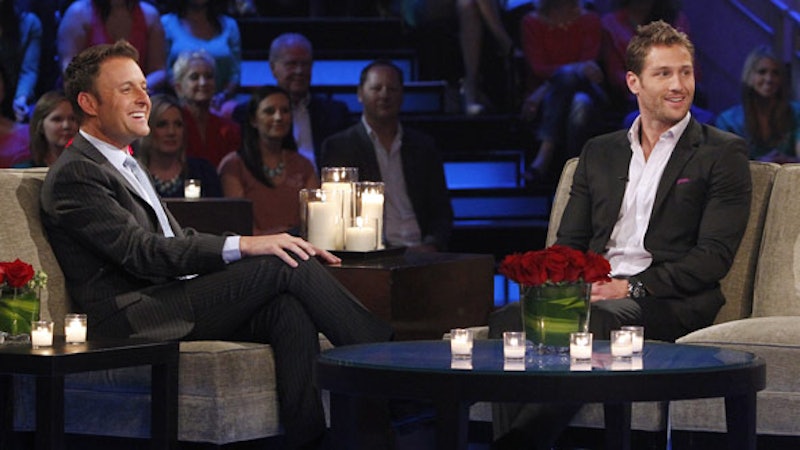 Even The Bachelor's host Chris Harrison is done with Juan Pablo. In a deleted scene released by Entertainment Weekly, Harrison interviews JP about that time he slut-shamed Clare. You can tell that Harrison probably expects to sit down and be like, "dude, what's up? You made her cry." And then for JP to be all like, "I know, I didn't mean to, I'm sorry." But that is not how the interview goes down at all because JP likes to stand behind his bad decisions unless of course they involve going into the ocean at night (ooohhh scandalous). As JP continues the interview you can see Chris Harrison grow more flummoxed by this man and it's almost as if he hates JP just as much as the rest of us do.

I've been saying for awhile that Harrison doesn't seem to be on JP's team as much as he usually is with his Bachelor/Bachelorettes. Likely it started with JP's terrible homophobic comments, but you can also tell that Harrison is kind of peeved by the way JP has been approaching this whole process. After the episode where Juan Pablo randomly decided to stop kissing women for that week, Harrison wrote about the moment in his Entertainment Weekly blog:

"He’s kissed several of the other women, but now there’s some random moral line he seems to have drawn. In a situation like this, you have to be careful to be clear and consistent or it’s going to lead to confusion and drama for him. When you say one thing and completely do another, obviously it’s going to lead to problems."

Though Harrison admonished his actions, he stayed pretty level-headed about it, but as the season wears on you can tell JP is wearing more on him too. After the night swimming debacle with Clare, Harrison wrote:

"Both of them mutually consented to be there and both of them really seemed to enjoy themselves. However, something drastically changed from the time Juan Pablo toweled off and the time he showed up at the cocktail party. He was feeling guilty and he decided to let Clare know he was disappointed in himself and somehow in her as well. So my question to you is, was it fair how Juan Pablo treated Clare? Was it okay for him to make her feel bad because he felt guilty for agreeing to do something he apparently later regretted? All of this and Clare’s response made for a very interesting and confusing night for all of us. Much like last week when Juan Pablo decided to restrict his kissing, it appears that the rules are ever-changing here."

This new deleted scene of JP and Harrison's interaction after the Clare ordeal further proves the point: Harrison is pretty fed up with JP. Juan Pablo trotted out the "I have a daughter," excuse saying, "I don't make one single move without thinking about Camila." Chris Harrison looks at him, and responds matter-of-factly, "But you did." The interview is only a minute and a half long but that's all you need to see that Harrison is just as over this whole Juan Pablo thing as we are. Fortunately there's only one more episode in which Juan Pablo may or may not propose before it's all finally over. Watch the deleted scene with Chris Harrison here: