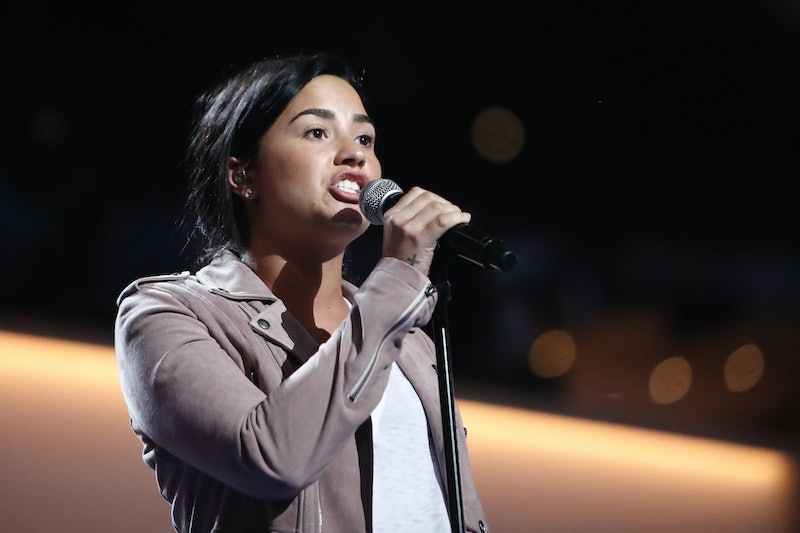 The Democratic National Convention kicked off in Philadelphia on Monday, with multiple speakers calling on the party to rally around presumptive presidential nominee Hillary Clinton amid protests from supporters of Vermont Sen. Bernie Sanders. Singer Demi Lovato was one such DNC speaker. The 23-year-old took center stage at the DNC on Monday evening to perform her hit song "Confident," and to support Clinton while addressing mental health.

Lovato has publicly supported Clinton's presidential bid since January, when she appeared at a campaign rally in Iowa for the former secretary of state. She performed four songs, but she intentionally kicked off with "Confident." “I don’t think there is a woman more confident than Hillary Clinton,” Lovato explained. “I am voting for her because of her beliefs, her strength, and the fact that she completely embodies the concept of women empowerment.”

Clinton subsequently lauded Lovato for “talking about issues that people sometimes find hard to talk about," specifically referring to mental health. Now, Lovato has taken that conversation to the national stage, and during her speech — which you can read the transcript of below — she praised Clinton and talked about her personal experiences with mental health. Lovato is not the only celebrity who is attending the DNC in support of Clinton. She is joined by Lena Dunham, America Ferrera, Eva Longoria, and many others.

Read the full transcript of Lovato's speech below.

Like millions of Americans, I am living with mental illness. But I am lucky. I had the resources and support to get treatment at a top facility. Unfortunately, too many Americans from all walks of life don’t get help, either because they fear the stigma or cannot afford treatment.

Untreated mental illness can lead to devastating consequences, including suicide, substance abuse, and long-term medical issues. We can do better. Every one of us can make a difference. By getting educated on this epidemic and its frightening statistics and by breaking the stigma, I urge every politician to support laws that will provide access to better healthcare and support for everyone.

This is not about politics. It's simply the right thing to do. I'm doing my very small part by having the treatment center that saw me through my recovery on tour with me so that at least a small group of people, even for a brief moment, have the same support that I received.

It may not be a lot but we have to believe every small action counts. I stand here today as proof that you can live a normal and empowered life with mental illness. I'm proud to support a presidential candidate who will fight to ensure all people living with mental health conditions get the care they need to live fulfilling lives.

That candidate is Hillary Clinton. Let's make her the next president of the United States of America.