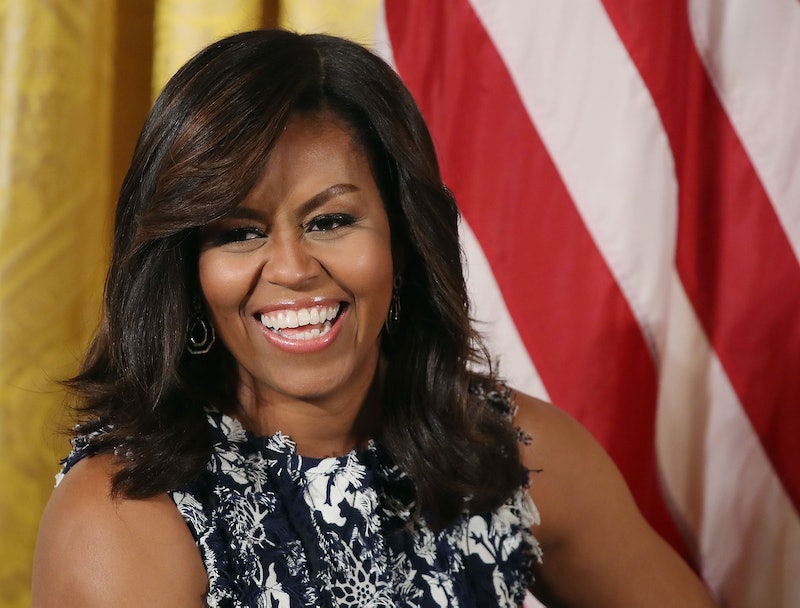 Before First Lady Michelle Obama took center stage at the Democratic National Convention on Monday night, she was introduced by a short video that lauded her for her extensive public service, especially as an advocate for children. Hillary for America and the DNC aired this video shortly before Obama walked on stage, and you can now watch this video about Michelle Obama and her legacy online.

The video features a number of young people talking about what the First Lady means to them. "The First Lady really inspires me because she's done so much," one of them says. "She's funny and she likes kids — and I'm a kid," says another. Many of the kids in the video also talk about Obama's commitment to health and physical fitness; a great deal of her advocacy, after all, has been about encouraging kids to get outside and be active.

But for many of these young people, Obama's legacy is about more than just the programs she helped put in place to ensure that kids have access to healthier food. She has inspired them in other important ways. As one young woman in the video explains, "The First Lady has inspired me to become a stronger, more happy, and independent young female."

According to her critics, Obama has attempted to avoid taking too much "political risk" in her work. But Obama has chosen instead to treat her advocacy for children as more than just a "policy issue"; this sentiment is reflected in the video. "She should be proud of how she treats the country's kids as her own," as one kid says of the First Lady. Indeed, Obama has often talked about her own daughters in her public appearances, and has occasionally treated her public service as an extension of her own parenting.

For many of these kids, Obama has also become a feminist icon. One particularly powerful part of the video points out that "She's not just a woman standing next to a man. ... She's making her own place in history." The video concludes with the kids thanking Obama for "looking out for me," and for "making this country a better place."

This was an important moment for Obama, who, along with her husband and many other top Democrats, appeared at the convention to voice her support for presumptive Democratic nominee Hillary Clinton. Obama made headlines last week during the Republican National Convention after Melania Trump's speech apparently lifted multiple passages from Obama's 2008 DNC speech, but on Monday night, Obama was celebrated in her own right.

More like this
What Is Barack Obama’s Net Worth? He Makes *Way* More Now As An Ex-President
By Hugh McIntyre
23 Abortion Funds In States With Trigger Bans To Donate To
By Emma Carey
Celebrities & President Biden Are Enraged By The Leaked Roe v. Wade Decision
By Alyssa Lapid
Dinner To Celebrate Diversity In Journalism Brings Out Media Leaders
By Brianna Kovan
Get Even More From Bustle — Sign Up For The Newsletter