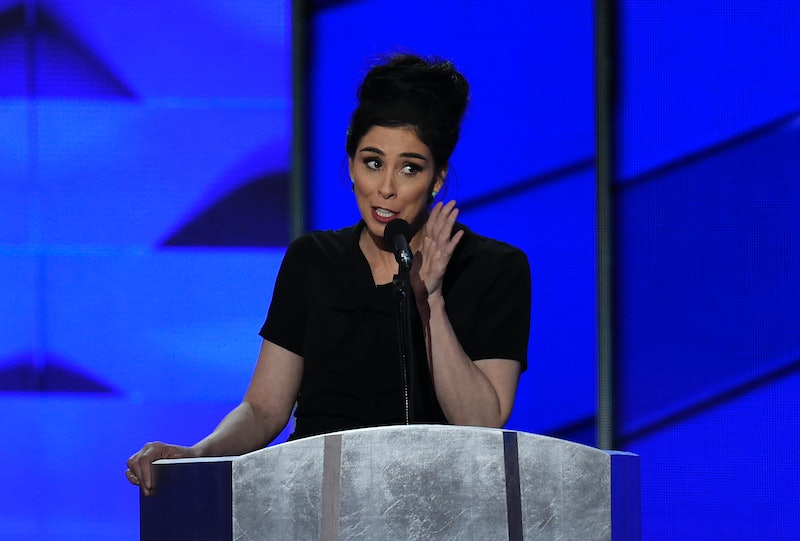 When it comes to star speakers, the Democratic National Convention certainly has their pick of the litter. One the most famous (and hilarious) speakers at this year's DNC is funnywoman Sarah Silverman, and the transcript of Sarah Silverman's DNC speech shows that she truly is one of the funniest Democrats out there.

A longtime and very vocal Democrat, Silverman stumped for Obama in 2008 when she issued an online video called "The Great Schlep" that humorously encouraged Jewish voters to get their grandparents to vote for Obama. In 2012, she campaigned against Republican voter suppression efforts and this election cycle, she famously threw her weight behind Bernie Sanders, whom she introduced tonight at the DNC.

Although this is Silverman's first official DNC speech, it isn't her first time doing convention-related work. During the 2008 DNC, Silverman, along with indie darlings Jenny Lewis, Ben Gibbard, and Zooey Deschanel participated in an Obama-themed gallery show in Denver called "Manifest Hope," in which artists presented works and performed in tribute to then-candidate Obama.

During her speech tonight, Silverman was as effortlessly hilarious and poignant as we've come to expect, a perfect mix of brains, humor and passion that make her political messaging all the more succinct.

As some of you may know, I support Bernie Sanders and the movement behind him. And Bernie has already succeeded in so many ways. He proved that Citizens United is in fact not a necessary evil, and by the way, Citizens United, isn't that such a beautiful name for something that means billionaires buying politicians? Good lord. Rails against the very spirit of our democracy. And I'm very glad that Hillary has vowed to overturn it.

Not only did Bernie wake us up, he made us understand what is possible and what we deserve. You know, my shrink says we don't get what we want, we get what we think we deserve. And Bernie showed us that all of America's citizens deserve quality healthcare and education, not just the wealthy elite. I know, it sounds so obvious, who wouldn't agree with that? But it's not what's been happening.

This Democratic primary was exemplary. No name calling, no comments about the size of candidates' hands or ethnicity or how much they sweat or if they go to the bathroom. Inside secret, they do. That stuff is for third graders, like c'mon, major arrested development stuff, that's I'm still emotionally 4 and calling people names from my gold-encrusted sandbox because I was given money instead of human touch or coping tools stuff. But I digress.

Hillary heard the passion of the people, the people behind Bernie, and brought those passions into the party's platform, and that, that is the process of democracy at its very best, and it's very cool to see.

Hillary is our Democratic nominee, and I will proudly vote for her. It's so inspiring. It's so inspiring, just a few years ago, she was a secretary, and now she's going to be president. I mean, c'mon. She's like the only person ever to be overqualified for a job — as the president.

So I tell you this, I will vote for Hillary with gusto, as I continue to be inspired and moved to action by the ideals set forth by Bernie, who will never stop fighting for us. I am proud to be a part of Bernie's movement, and a vital part of that movement is making sure Hillary Clinton is the next president of the United States. Boo yah. Baby booey.

Silverman and Al Franken were then tasked with stretching out time before Paul Simon took the stage, and the crowd took that moment to chant for Bernie. Here's how that looked:

Silverman: Unity! Unity! Can I just say, to the Bernie or Bust people, you're being ridiculous. They told us to stretch, so I figured I'd add that. Oh, I have so much I want to say.

Franken: You know, we, what, listen to that. Listen to what you did. This is a comedian, this is the power of comedy.