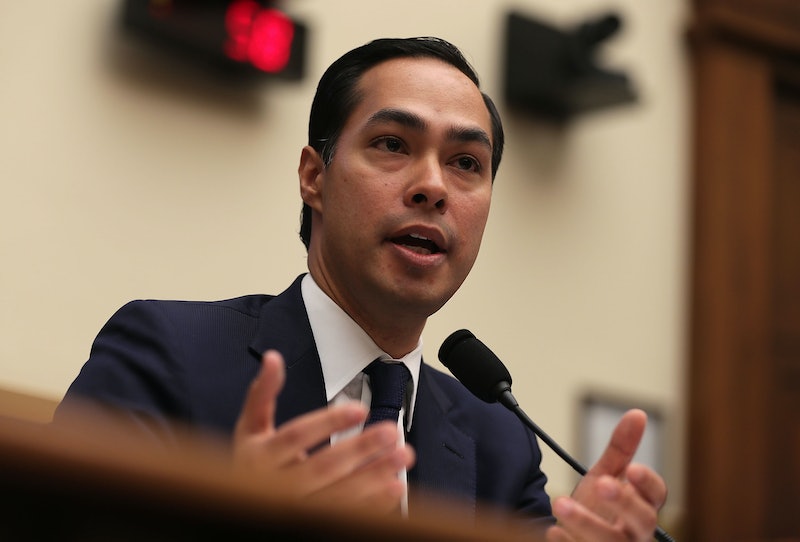 Before presumptive Democratic nominee Hillary Clinton selected Virginia Sen. Tim Kaine as her running mate, her campaign vetted several other Democrats for the position. One of the people on her shortlist was Julián Castro, the Secretary of Housing and Urban Development. Ultimately, Castro — like Massachusetts Sen. Elizabeth Warren and New Jersey Sen. Cory Booker, among others — was passed up in favor of Kaine. But Castro is still a resolute Clinton supporter, and in an interview with Bustle on Monday, he praised Kaine's genuine nature and urged "everyone along the political spectrum" to vote for the Clinton-Kaine ticket.

Castro told Bustle that although he is a bit disappointed about not being Clinton's running mate, he is still "excited" about her candidacy. "Hillary Clinton is a great candidate, and Tim Kaine makes the ticket even better," he said. "He's a fantastic person to select as vice president — well-prepared. Maybe most importantly, he's a genuine person. He cares about other people, and so I have every confidence in Tim and in Hillary."

The former mayor of San Antonio, Texas also rejected the possibility that the all-white Clinton-Kaine ticket would struggle to obtain the votes of people of color. In a previous interview with The Washington Post, Castro said that Clinton's vision for America was inclusive of the Latinx community, and on Monday, he told Bustle that Kaine would actually help Clinton reach out to more communities and unify the Democratic Party:

In fact, in Sen. Kaine, you have somebody that his entire life has reached out and has sought to understand other communities. He serves a very diverse state in Virginia, particularly Northern Virginia. He goes to an African American church and he speaks Spanish. His whole life, he's reached out to other groups, and I think that that's very fitting for a Democratic Party that is diverse in 2016. So I'm confident that we're going to have a unified party, and that both Hillary and Tim exemplify that.

While Castro, Warren, and Clinton herself have called for party unity, some of the progressives who rallied around Vermont Sen. Bernie Sanders are reluctant — if not unwilling — to give their vote to Clinton, choosing instead to support a third-party candidate. Castro warned against this. He urged voters to think about the 2000 election, in which Al Gore lost both Florida and the election by a small margin. Although many critics have blamed Gore's loss on Green Party candidate Ralph Nader, exit polls from the election actually attribute his loss to Democrats who voted for George Bush. Nevertheless, Castro encouraged voters to rally around Clinton, and he believed that Sanders' speech would work to that effect.

"If you thought that George W. Bush was bad, can you imagine a president Donald J. Trump?" Castro asked. "Those are the stakes, and so I would urge everyone along the political spectrum to support Hillary Clinton, because this nation cannot afford to go back to the place that Donald Trump wants to take us back to. That won't be good for anybody in our country."