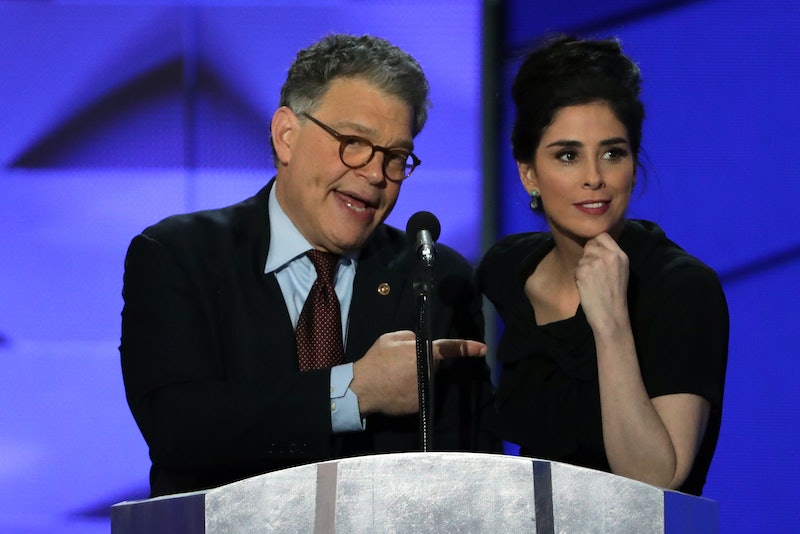 Amidst chants of "Bernie, Bernie!" at the Democratic National Convention, Sarah Silverman told Bernie-or-Bust supporters they're being ridiculous. The comedian was just one of the star-studded speakers making an appearance on the first night of the much-anticipated convention. She shared the stage with longtime Clinton supporter Sen. Al Franken of Minnesota and in classic Silverman style, directed some punchy jokes towards the Republicans. A dedicated Sanders fan who vocally supported him throughout the span of his campaign, Silverman's tone became more serious as she told the audience that she's fully supporting Clinton.

Though a roaring cheer arose from the audience, "Bernie!" chanters weren't ready to quit just yet. Silverman, who can relate to their promotion of Sanders, told them enough is enough. The Vermont senator is scheduled to speak later in the night and has ensured the party that he will continue to support Clinton, despite Friday's DNC email leak. The fact that Silverman didn't mention the incident, which could have allegedly put Sanders' campaign at a disadvantage, suggests she's putting her previous allegiances aside to promote unity within the party and defeat Trump in November.

Can I just say to the Bernie-or-Bust people, you're being ridiculous.

Still, many Sanders fans might not be ready to take this step now that the email leak has presented a bump in the road for the committee. Before the primetime events started, vehemently pro-Clinton and pro-Sanders convention-goers engaged in something that resembled a shouting match. Protesters also gathered outside of the convention hall, although that's not entirely uncommon for this type of event, and delegates in support of Sanders expressed resistance towards the DNC's impending decision. According to NPR's Tamara Keith, Sanders had sent a message to his delegates, asking that they do their best to prevent and break up these factions. It goes without saying that neither Sanders or Clinton want the DNC's protests to be comparable to those that took place at the Republican National Convention last week. Silverman's humor might help make that feat possible.