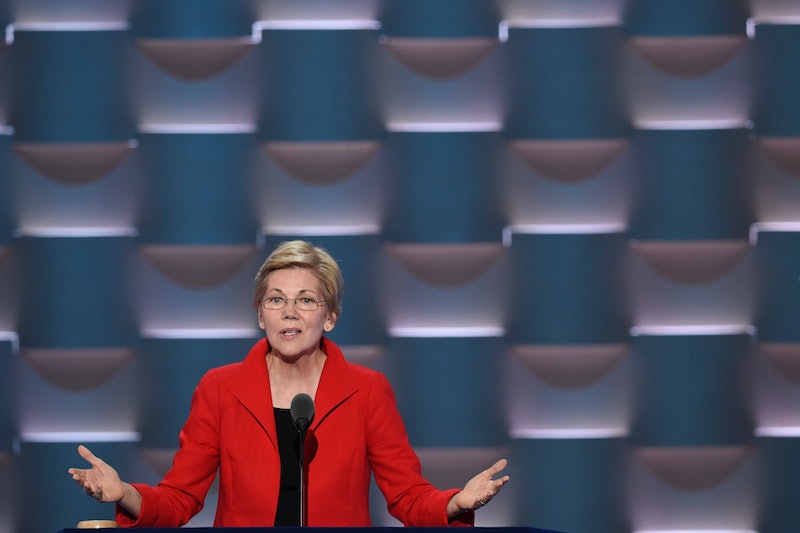 During one of the most anticipated events of the Democratic National Convention in Philadelphia, what Elizabeth Warren said about Hillary Clinton earned rousing applause and cheers from pro-Clinton audience members. Beloved by liberals and moderates alike, Warren's speech was as sobering, intelligent, and thought-provoking as any she's given in her career. But it was what Warren said about Clinton's values that really showed where her heart is.

During her speech, Warren made a number of incredible statements, especially when she admitted that the system is rigged, though whether she was referring to the Democratic Party's nomination system or the "system" we live in as a whole remains unclear. She also, of course, had many words for Republican nominee Donald Trump, not the least of which included her insistence that he's full of "hot air," and joked about his "stupid wall" in reference to his controversial statement that he'd build a wall between the U.S. and Mexico.

It's no secret that Warren is "with her." She mentioned Clinton by name 16 times during her speech, and each time she did so, it was clear that her admiration for Clinton as a candidate and a person surpasses mere political maneuvering.

Warren gave her abbreviated life story as a means for supporting Clinton, saying that although she was able to go from being a janitor's daughter in Oklahoma to a U.S. senator, she's worried her story "is locked in the past" and that such opportunities are more difficult for younger generations than they were for her own.

The way I see it, I'm a janitor's daughter who became a public school teacher, a professor, and a United States Senator. America is truly a country of opportunity!

It was her appeal to shared values, however, that really drove the point home: the values of Clinton and her running mate Tim Kaine must "trump" the values that Trump represents. It's those values, Warren said, that drive Clinton to work for American working class families, to put an end to discrimination, and to ensure reproductive rights.

At the end of her speech, Warren echoed Clinton's campaign slogan, saying that "we are stronger together," and asked voters to "work our hearts out" to elect Clinton for president.

While the beginning of Warren's speech was marked by boos and shouts from some audience members, her appeal to shared values and a belief in the working class American dream was succinct and passionate — we'd expect nothing less of the excellent Sen. Warren.