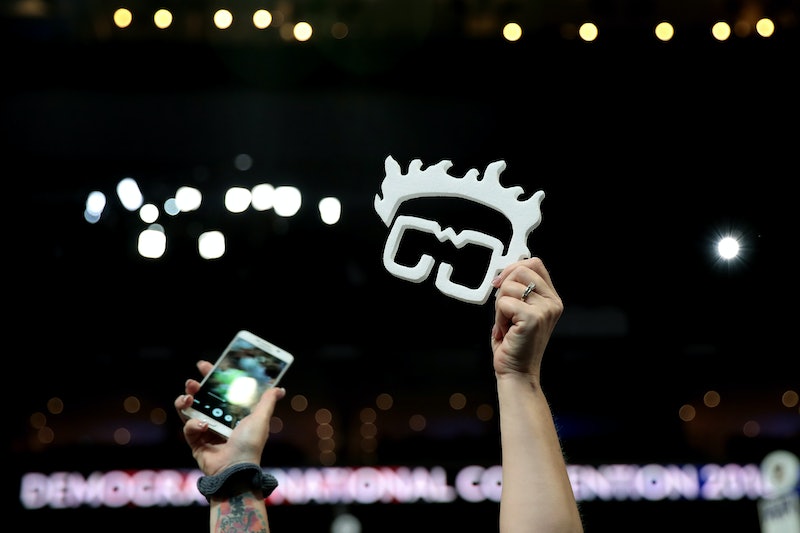 On Monday evening, following rousing speeches by Michelle Obama and Elizabeth Warren during the Democratic National Convention's first evening, Bernie Sanders took the stage in an effort to convince his supporters to vote for Hillary Clinton. This is no small feat: A number of Sanders' supporters, after all, identify as members of the so-called "Bernie or Bust" movement, which believe, basically, that it's Bernie's way or the highway. Now it's abundantly clear that the election will not go Sanders' way, the senator from Vermont has taken it upon himself to share a message: Vote — but not for me. Vote for Hillary Clinton.

It's a hard message for many Sanders supporters to swallow, in part because Sanders' independent-leaning platform, with its focus on breaking down the banks and eliminating student debt, has been so different from Hillary Clinton's. However, when compared to Donald Trump, the two have a great deal in common, and Sanders knows it. Some of the most passionate Sanders supporters — those who flocked to Philadelphia to let the DNC know that it had let down their candidate, as laid bare in those leaked emails — suggested that they might vote for Donald Trump, vote third-party, or not vote altogether (hence, you know, the term "bust").

Pro-Sanders celebrities like Rosario Dawson and Susan Sarandon came to Philadelphia this week to reveal that they were still uncertain about Clinton, and more certain than ever about Sanders being the right candidate. Meanwhile, passionate Bernie Sanders supporter Sarah Silverman was booed loudly Monday night when she said, "Can I just say to the Bernie-or-Bust people: you're being ridiculous."

Sanders had a far less insulting, but no less firm, message for Bernie-or-Busters in his own speech. It applied to not only the "Bernie or Bust" group, but to anybody who believes the election doesn't matter, or that voting in November isn't important or meaningful.

If you don't believe this election is important, if you think you can sit it out, take a moment to think about the Supreme Court justices that Donald Trump would nominate and what that would mean to civil liberties, equal rights and the future of our country.

In other words: Do not let your vote go "bust," guys. It's not me. It's Hillary Clinton. Clinton's as close as we're going to get. And if you don't vote for Clinton, things will get a lot worse. "Hillary Clinton must become the next president of the United States," he admitted.

Sanders went on to justify what he was asking of his supporters.

It is no secret that Hillary Clinton and I disagree on a number of issues. That's what this campaign has been about. That's what democracy is about. But I am happy to tell you that at the Democratic Platform Committee there was a significant coming together between the two campaigns and we produced, by far, the most progressive platform in the history of the Democratic Party.

It's a difficult pill for Sanders to swallow, but it was hard for Sanders' supporters to hear, too. Several of them openly sobbed on live television after Sanders made clear that he no longer supported the pledge of some of his most impassioned supporters.

"Our job now," Sanders went on to say, in the speech that was essentially his swan song, "is to see that platform implemented by a Democratic Senate, a Democratic House and a Hillary Clinton presidency."

"And I am going to do everything I can to make that happen," he concluded.