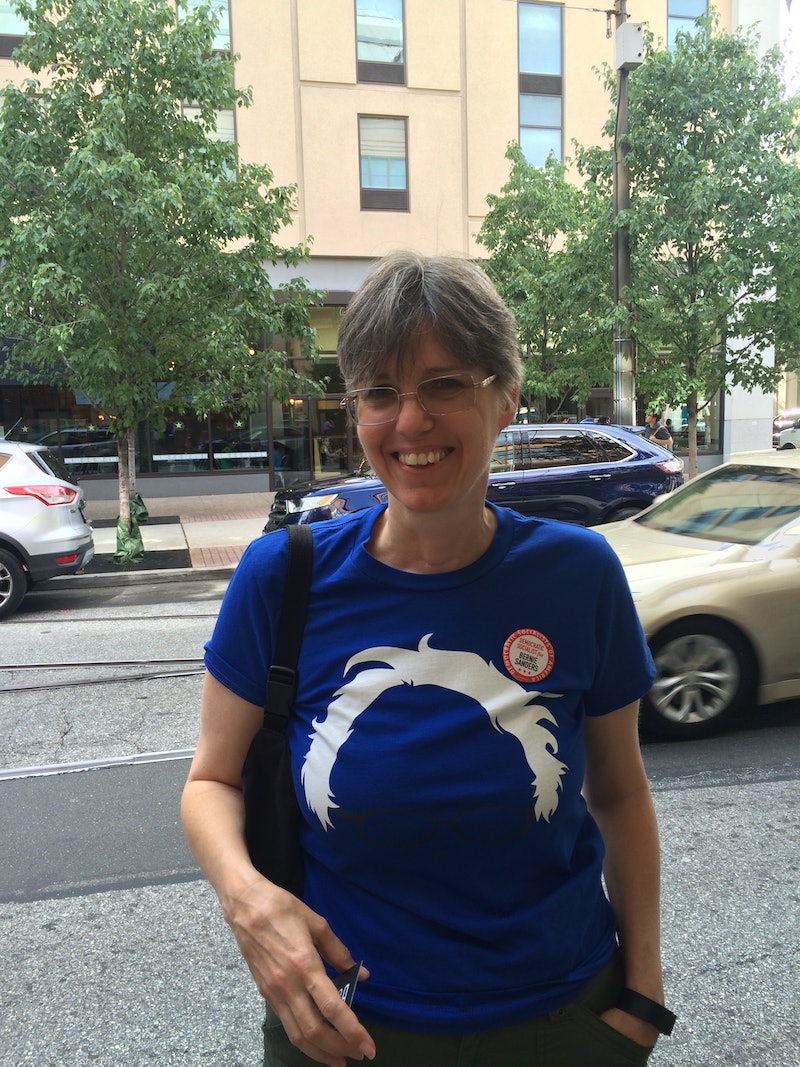 Don't know anyone from your family or friendship group who's dedicated to Bernie Sanders? You should. His supporters make up nearly half the pledged delegates at the Philadelphia Democratic National Convention. Meet Kate Miller, one of Bernie's pledged delegates from New York State, whom Bustle spoke with Sunday afternoon. Miller's not "Bernie or bust" (the movement described as "ridiculous" by Sarah Silverman Monday night), but the 51-year-old is definitely still in it to win it — even more than the candidate himself — which goes some way to explain the passion that played out on the convention floor Monday night.

Miller's Buffalo for Bernie blog profile sums up the excitement she, and the Bernie camp more generally, feel for the candidate. For example, when she found out he was running for president, she says she did the Snoopy dance. To her, Sanders means an end to "hold-your-nose" politics. "He believes that we have the collective right and the responsibility to participate fully in our own government, to make the world a better place for all of us," she tells Bustle. That's what Miller and all the folks at Buffalo for Bernie have been working toward.

So don't be surprised that she's still planning to vote for Sanders:

I'm planning to vote for Bernie Sanders in the general election. I know that the nomination has not been locked up yet. No one has the magic number. We're going to see what happens at the convention. If Bernie Sanders does not win, then I'll make my decision later on. I know for sure I am not voting for Donald Trump. Beyond that, that decision will wait until we know what's going to happen at the convention.

Sanders hopes that he's started a political revolution, and it's not ready to settle for Hillary Clinton, regardless of what he says. Last night was proof of that.

"Hillary Clinton will make an outstanding president, and I am proud to stand with her here tonight," he told delegates on the floor during in his speech. Some booed.

Miller — and perhaps many the Bernie supporters at the DNC this week — are reeling from (and perhaps feeling a bit vindicated by) the email hack. To them, the many emails in which DNC staffers appeared to blatantly prefer Clinton to Sanders confirmed their suspicions. "I wasn't really surprised by the emails, no. It was kind of confirmation of what I had already thought," Miller says.

The sacking of Debbie Wasserman Schultz won't be a fix-all for the damage the controversy has done to party unity. That said, Miller's still glad to see her go:

I am pleased. I think it should have happened sooner. I think I share the feeling with pretty much all of Bernie's supporters and anybody who is concerned with democracy that this was a travesty. The Democratic Party is supposed to be neutral, it's supposed to be impartial, and they weren't. They put a huge thumb on the scale of the process and gave an advantage to Hillary Clinton.

Miller went on to point out that it's "not entirely Debbie Wasserman Schultz's fault." She, after all, "had a lot of help with this." Now the question is what else can be done to build bridges and mend the situation before November. The first step will come when Clinton officially clinches the nomination.