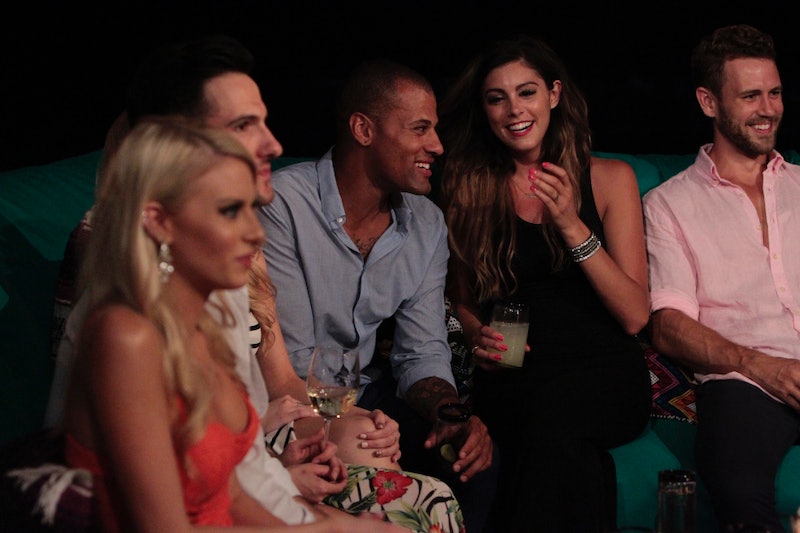 The Bachelor's Ben Higgins is engaged and The Bachelorette JoJo Fletcher is narrowing down her field of contestants on her quest for true love, but once JoJo decides on her man, you know what time it is — the point in the Bachelor cycle in which castoff contestants find love and drama on Bachelor in Paradise, which premieres on Aug. 2. ABC has announced the full cast of Bachelor in Paradise 2016 and it's filled with fan favorites, the umpteenth return of Nick Viall and, well, Chad Johnson. ABC's announcement also states that additional Bachelor and Bachelorette alums could find themselves on the six-week series.

Twins Haley and Emily Ferguson, Lace Morris, Leah Block, Jubilee Sharpe, Amanda Stanton, and Izzy Goodkind were cast from Ben's recent Bachelor season. Bachelor in Paradise will also include several of JoJo's Bachelorette castoffs: Evan Bass, Grant Kemp, Daniel Maguire, Vinny Ventiera, and the infamous Chad, who made plenty of waves during the first part of JoJo's season. After appearing in two Bachelorette seasons, Viall will make his first appearance in Paradise, as well as Jared Haibon from Kaitlyn's season. As those folks make their debut in paradise, they'll find themselves interacting with returnees Carly Waddell (Chris Soules' season), and Sarah Herron (Sean's season). Personally, I'm hoping the wine-loving confessional raccoon was also invited back to Bachelor in Paradise, but I guess we shall see.

Here's a refresher course on what you need to know about this year's cast of Bachelor in Paradise.

The 27-year-old restaurant manager from Kaitlyn's season is from Warwick, Rhode Island. Last season on Bachelor in Paradise, he flirted with Ashley Iaconetti, but is still single and looking to mingle.

The famous set of twins who dated Ben Higgins as twins — until Emily was eliminated — and their occupation was hilarious listed as "Twins." Now, they're back and this time around, ABC has their bios separate on the website. Could that be a sign that these two will be dating as individuals on Bachelor in Paradise rather than as a team?

The 25-year-old Denver, Colorado, event planner is from Ben's season and was eliminated in the sixth week.

Viewers hardly got to know Lace during Ben's season. She bowed out in Episode 3 after some minor misunderstandings and too much wine.

The single mom made it to the Hometown Date round with Ben, but he ended it soon after he met her family — which includes her two daughters. Perhaps Amanda find a man who will embrace her family this time around.

Jubilee and Ben tried to make it work, they really did. The war vet and Bachelor Ben were open with each other — she told him about her family's tragic history and he ultimately broke her heart by honestly declaring he didn't see a future with her.

Love didn't work out for Sarah during Sean's season or during her first run on Bachelor in Paradise, where her connection with Robert Graham was more friendly than romantic.

The singer/songwriter from Chris Soules' season ended her first Bachelor in Paradise season heartbroken when things with Kirk Dewindt didn't work out.

The graphic designer was sent home on Ben's first night as Bachelor, but she'll get a second chance at love on Bachelor in Paradise.

Chad will be bringing his protein powder, workout regime, and tell-it-like-it-is attitude from JoJo's season to Paradise, which should be very interesting.

His occupation was known as "Canadian" during JoJo's season. And he's still from Canadian and headed to Bachelor in Paradise after he was eliminated from The Bachelorette in tears to the soundtrack of "Don't Cry For Me Argentina."

The pastor/Erectile Dysfunction specialist from JoJo's season faced off with Chad a lot in the house. Will they get along and focus on finding love this time around?

The hunky firefighter from JoJo's season is looking for love once again.

After failing to find lasting love with Bachelorettes Andi and Kaitlyn, Viall will make his first appearance on Bachelor in Paradise.

The barber from JoJo's season was eliminated in the fifth week, but perhaps he'll find love in Mexico on Bachelor in Paradise.

And with a cast like that, Bachelor in Paradise sounds like it's going to lead to lots of summer romance — and drama — for viewers to enjoy.