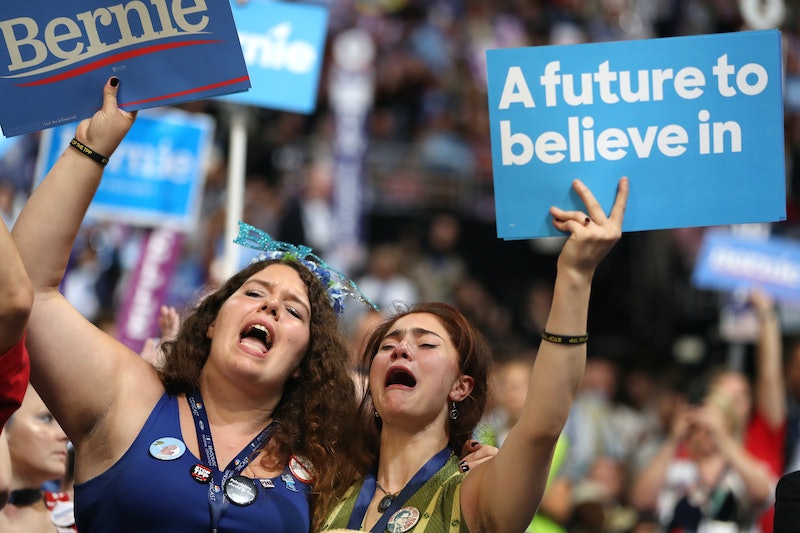 Monday night was emotional at the DNC — and not just for Bernie Sanders, who again endorsed Hillary Clinton for president in a speech. The most visibly upset attendees by far were Sanders supporters, with many in tears. Delegates on the convention floor bawled through much of his speech, to the notice of many and the disrespect of a few. One of those comments came from Vice correspondent Michael Moynihan. Tweeting a photo of a young women in tears, he wrote, "The arena seems to be filled with suicidal Marxists who work at TGI Friday’s."

Katelyn Gadd of San Jose, California, responded: "Yeah look at these suicidal millennials who will never own a house or pay off their loans or live in a US that isn't at war." Followed up shortly thereafter with: "Isn't it hilarious that they care about something enough to attend a rally and cry? Good job being a smug empty suit dude."

In case you've forgotten, Sanders referenced the precarious situation of many young Americans many times throughout his speech. Here's one example:

This election is about ending the 40-year decline of our middle class the reality that 47 million men, women, and children live in poverty. It is about understanding that if we do not transform our economy, our younger generation will likely have a lower standard of living than their parents.

A few years back, a study revealed that one in five millennials lived in poverty. There are at least 80 million millennials in the country right now. So perhaps around 16 million of them live in poverty. That means nearly 35 percent of the people living in poverty whom Sanders mentions are millennials. Then, of course, there are those barely scraping by, paying student loans and racking up credit card debt. The poverty line for one person in 2016 is $11,880 per year.

And sure, the crying Sanders supporter probably isn't working in a turn-of-the-century sweatshop. But that doesn't make her hope for a better future any less worthy of respect. Sanders made the hopes of a free education and government-run Medicare-for-all healthcare seem achievable for the first time in our generation.

For many, it seemed a very real possibility. All young people had to do was feel the Bern. With Sanders in office, it was presented, all of this would come to fruition. Obviously, it's way more complicated than that. Winning a progressive majority in the House and Senate would be necessary as well, for example. But regardless of the facts, there was hope in a Sanders candidacy that many young voters connected with.

So it's natural to be sad, it's natural to mourn, and it's natural to dread the extra hours worked to pay for community college tuition or your Obamacare-mandated insurance premiums. So let them grieve. Sanders himself acknowledged the disappointment his supporters feel:

I understand that many people here in this convention hall and around the country are disappointed about the final results of the nominating process.

Instead of belittling Sanders supporters for their reactions to his loss, the DNC and all those who'd like to avoid four years under Trump need to recognize millennials' situation, propose something to address it, and welcome them into the fold. Clinton has already started her outreach by working with Sanders to develop a plan for affordable college. The media could get on board as well, as opposed to stirring controversy between the two.

If we give them time and respect, they will surely come to understand what Sanders said Monday: "Any objective observer will conclude that, based on her ideas and her leadership, Hillary Clinton must become the next president of the United States. The choice is not even close."

Stop belittling Sanders' contingent, and give them some time to accept his loss and get on board with Clinton.