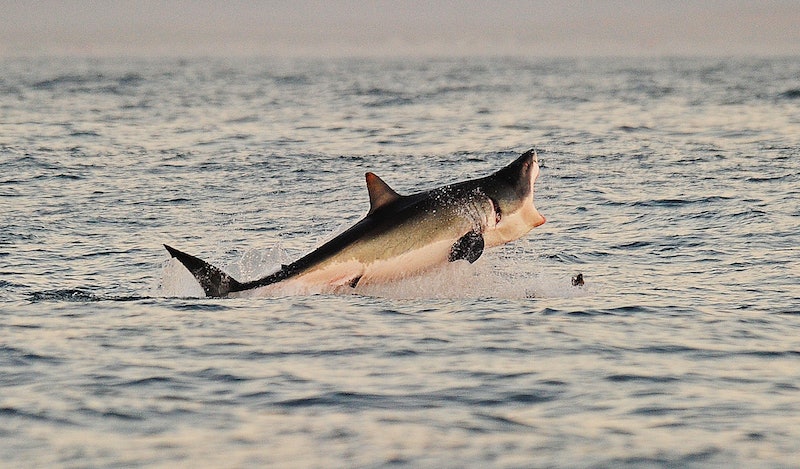 I thought it was almost impossible to find a concept for a shark movie that was too outlandish to be true, but 2014's Atomic Shark seemed like it would be the one. I mean, a shark outfitted with a nuclear bomb is so ridiculous that it can't possibly be true, right? How could it be possible that atomic sharks are real? Well, while there's never been any nuclear warheads strapped to the side of a shark's body, there have been sharks who were affected by nuclear energy.

In connection with Shark Week 2016, Philippe Cousteau, Jr., grandson of famous oceanic explorer and Life Aquatic inspiration Jacques Cousteau, traveled to the Marshall Islands to see the effects of American nuclear testing on the area's local shark population. Cousteau's trip to Bikini Atoll showed how both American and Japanese bombs decimated the undersea wildlife. Cousteau's wife, Ashlan, told the New York Post, "Normally when you go down 160 feet you see everything ... sharks, maybe you see whales .... But when we went into the crater, there was nothing."

The Cousteaus' eerie trip to the former testing grounds was documented in Nuclear Sharks, where they were ultimately successful in finding a population of indigenous sharks who have taken up residence among the sunken ships that were a part of the tests.

There's also some history of sharks being found in and around nuclear power plants, at least judging by this video uploaded by some fishermen who saw one shark being attacked by another shark while fishing near a nearby plant.

And while atomic bombs have never been strapped to sharks of any kind, there is one famous, tragic connection between the American military and shark attacks: the 1945 sinking of the USS Indianapolis. As National Geographic explains, after delivering components that would be used to make an atomic bomb to Pacific Islands, the war ship sank quickly after being attacked by Japanese forces, leading to "what is considered the worst shark attack in history."

After the ship, which was staffed by over a thousand crew members, sank, the men were floating in the middle of the ocean. Unfortunately, sharks "were drawn by the sound of the explosions, the sinking of the ship and the thrashing and blood in the water," according to National Geographic. "Though many species of shark live in the open water, none is considered as aggressive as the oceanic whitetip," which just so happened to be the type of shark that was waiting for the crew. Casualties from days of the survivors waiting for rescue in the water may have numbered as high as 150. It's the same tragedy that provides Captain Quint with his solemn monologue in the middle of Jaws.

I won't condescend to you: There's obviously no way that a shark will ever be outfitted with a nuclear bomb, and if you possibly thought that Atomic Shark was based on the truth, you may need to spend a little less time watching television. But even if there's no such thing as a comedically cartoonish oversized Great White with a radiation-filled backpack, there is somehow a history between sharks and nuclear technology. The truth is stranger than fiction, even if that fiction is a Sharknado-level film.