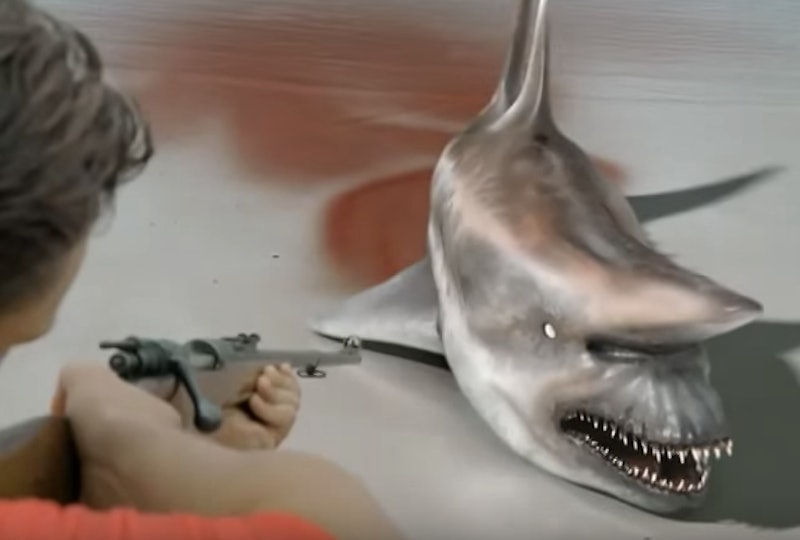 If you get all of your shark information from made-for-TV movies, I hate to tell you this, but you may have a few misconceptions about some of the ocean's largest creatures, most notably imagining that every species of shark is as huge as a great white and has an appetite for human flesh. But the 2016 rerun of 2009 SyFy movie Malibu Shark Attack prompts the question, are goblin sharks real? Usually, oceanic horror stories really stretch the truth, either by completely making something up or by exaggerating certain attributes. But the goblin shark's long, floppy nose and white, flabby fins in the film closely resemble the way the real goblin shark (technical name: Mitsukurina owstoni) looks.

Actually, the goblin shark may be one of the few creatures that doesn't need to be completely embellished by the creators of schlocky horror movies. Because while there's no recorded B-movie shenanigans with a whole pack of goblin sharks on the offensive on a local beach, these literally prehistoric creatures do is exist, and they really will haunt your nightmares, even if they don't pose a threat to your trip to the beach. (Even Malibu Shark Attack has to form a complicated backstory to justify the onslaught of these rare sharks.)

The cast of Malibu Shark Attack are the victims of a whole pack of goblin sharks attacking their shelter, which is not consistent with the usual way these fish are found in nature. In fact, according to ReefQuest Centre for Shark Research, the goblin shark is so rare and prefers to live in such deep water that risk of bites is basically negligible — unless, like the divers in the below video, you purposefully seek out the fish in hopes of filming them.

However, Malibu Shark Attack did get one thing right, and that's how scary the goblin shark looks. This might be the creepiest shark species out there, and it really does have long, sharp teeth. And the way they devour their prey (not humans, but bottom-dwelling fish and crustaceans) sounds absolutely terrifying. According to Sharks World, the goblin shark eats when "their jaw goes out similar to how a human can stick out its tongue. Then with a sucking motion they draw the prey into their mouth where very powerful teeth are waiting to consume it." Yeah, it's as creepy as it sounds.

But while goblin sharks don't pose much of a threat to humans, it is a little frightening to know that a creature like that is lurking at the bottom of the ocean. Malibu Shark Attack may not have captured the behavior of the goblin shark, but it certainly managed to perfectly capture just how chilling these sharks can be.