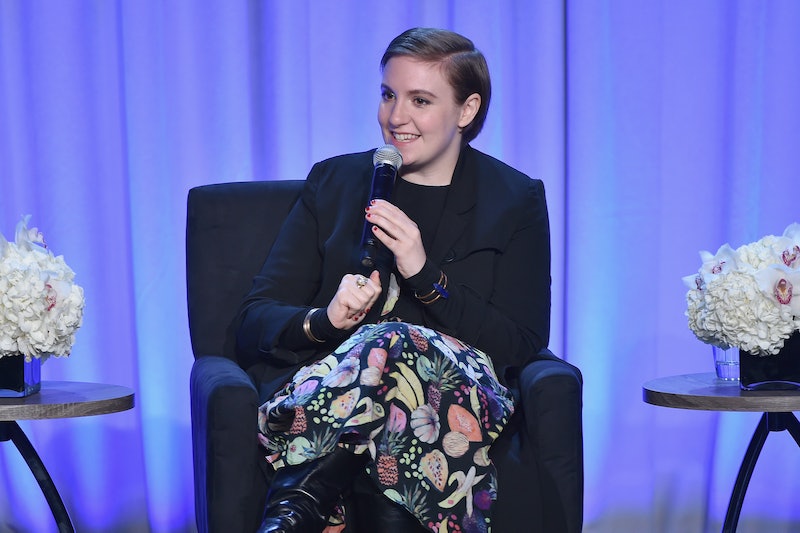 Writer, activist, Girls creator, and wearer of many hats Lena Dunham has proven to be a friend and indispensable ally to Hillary Clinton in the leadup to this week's Democratic National Convention. As she's done multiple times through the campaign trail, Dunham will be speaking at the convention on Tuesday on Clinton's behalf. Her speech, like the many instances she's gone up to bat for the candidate, will likely be filled with the same passion Dunham is known to show for Clinton.

Unlike the Republican National Convention, which reportedly had trouble courting top talent, the DNC speaker's lineup includes an impressive group of A-list celebrities, with the likes of Katy Perry and Demi Lovato showing up. But among this star-studded list, perhaps no one has championed for Clinton the way Dunham has.

Dunham has spoken time and time again for the candidate, being sure to allude to both her significance as a female presidential nominee as well as her sheer qualifications as a politician. She has wanted to make sure that voters understand that she has "no plans to blindly follow my uterus to the nearest polling station." Dunham is clear to assert that Clinton stands on her own merit — but the fact that she's a woman only adds to the impressive nature of her rise to power.

At a campaign event in Iowa this January, Dunham said of Clinton:

I can't talk about Hillary Clinton without also acknowledging that she has survived horrific, gendered attacks on nearly every single aspect of her character with tremendous grace and aplomb. The way she's been treated by the media is just more evidence of the anger that exists toward women, particularly ambitious women, and the way we are not allowed to exist on our own merits, rather than extensions of powerful men.

The actress, too, has faced her own share of sexist criticism for supporting Clinton. But the fact that she still stands with her, despite these attacks, shows that Dunham is in it for the long haul. A report from Variety quoted Dunham as saying, "The fact that other members of the Democratic Party have spoken to me like I was an ill informed child for voting for someone who represents everything I think this country should be is outrageous." Nevertheless, the actress has continued to regularly champion for Clinton's causes.

But again, Dunham is clear that the candidate's political prowess, not gender, makes her the most qualified candidate for the presidency. She told a crowd at a campaign event in California that she was "going to vote for the candidate I’ve been dreaming of stepping on that stage for my entire life."

The idea that you’re gonna tell me that the woman who stepped into the White House when I was 6 years old and made me think it was possible to live the life I wanted and say the things I believed has somehow not done enough for women is so offensive to the core of my being.

Dunham's ability to frame Clinton in both a historical and political context makes her own of the strongest allies the candidate has. The fact that Dunham credits Clinton with much of her success personally and professionally speaks volumes, and shows she's willing to go the extra mile for Clinton. These quotes prove it, and the actress is likely to prove it again on the DNC stage this week.