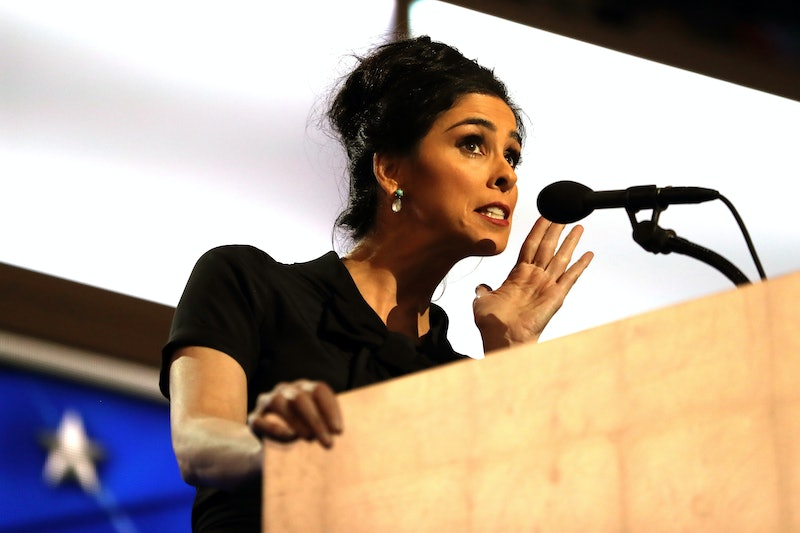 When the list of speakers for the first night of the Democratic National Convention was being talked about over the weekend, people were buzzing about the big names lined up for the first night. There were Massachusetts Senator Elizabeth Warren, First Lady Michelle Obama, New Jersey Senator Cory Booker, and Vermont Senator Bernie Sanders, who was being looked at to mend the bitter feelings felt by his supporters against presumptive party presidential nominee Hillary Clinton. In the end, the most important moment of the night was a five-minute speech from comedian and fervent Sanders supporter Sarah Silverman, who appeared with Minnesota Senator (and former comedian) Al Franken, seemingly for the primary purpose of introducing a performance by Paul Simon.

Instead — partially because she was being asked to stretch to give Simon more time — Silverman delivered one of the most thoughtful encapsulations of the Democratic Primary. And though she’s making headlines Tuesday morning for an ad-libbed (but clearly much-needed) reality check for the vocal (though by most reports, tiny) group of Sanders supporters intent on disrupting the convention, the thrust of her speech is an important reminder of how party politics are supposed to work: It’s about coming together, idiots.

“This Democratic primary was exemplary,” Silverman said. “No name-calling, no comments about the size of candidates' hands or ethnicity or how much they sweat or if they go to the bathroom.”

By calling out the boorishness of the Republican primary, Silverman reminded Democrats how much they had to be proud of, and how that meant that she could throw her support enthusiastically behind the party’s nominee. “I will vote for Hillary with gusto,” she concluded, “as I continue to be inspired and moved to action by the ideals set forth by Bernie.” This was perhaps the most nimble and important political lesson of the night: Believing in Sanders’ cause and voting for Clinton are not diametrically opposed actions.

Silverman even laid out the idea that not voting for Clinton was a betrayal of Sanders’ cause. “I am proud to be a part of Bernie's movement,” she said. “And a vital part of that movement is making sure Hillary Clinton is the next president of the United States.”

In the end, Silverman was teaching Party Politics 101 to a group of people who were new to the political process. Democratic politics is never about getting everything you want (one might even argue that getting everything you want is totalitarianism), and the petulance of some of Sanders supporters betrayed their naïveté. The exclamation point on the end of her speech — calling out the Bernie or Bust activists as “being ridiculous” — was the #realtalk that was needed to underscore that there’s no room in this election for sore losers.