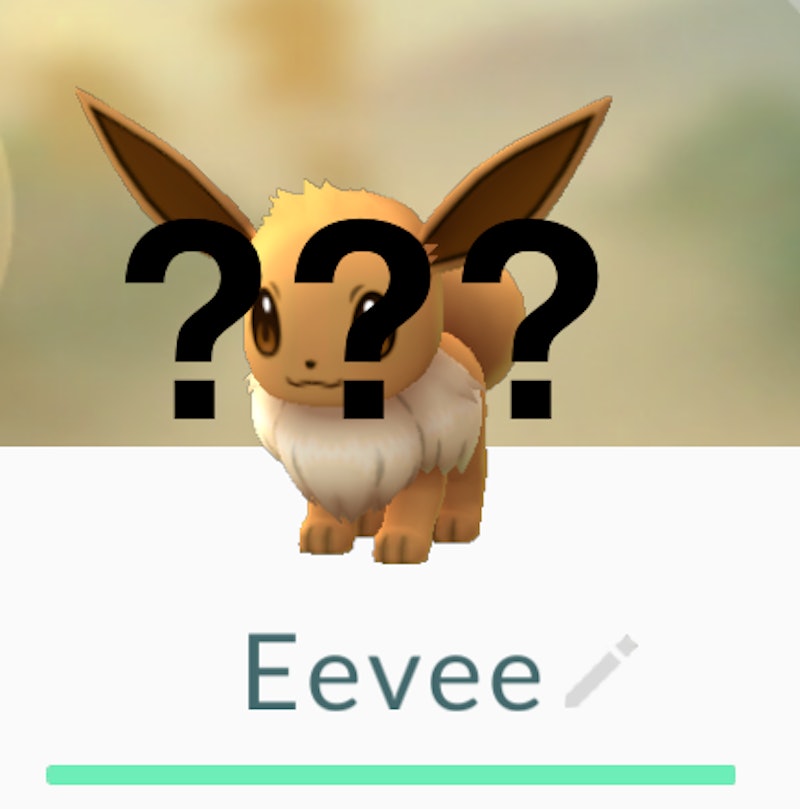 Eevee may be as common as a Rattata, Pidgey, or Doduo in some neighborhoods, but this adorable fox-like Pokemon has the ability to evolve into three different possible forms, a talent that sets it far above the crowd. When looking at the stats for Vaporeon, Flareon, and Jolteon, you may be wondering which Eevee evolution is best? Heck, Eevee is so dang adorable you may not want to evolve it at all (but you definitely should!).

In the old days (like, literally last week), we didn't think we had a choice when we evolved an Eevee. We would just cross our fingers and pray for the form we wanted. Now that Reddit has exposed the secret — that nicknaming an Eevee properly will yield the desired evolution — we are confronted with an important choice. Like the three legendary bird mascots, each of Eevee's evolved forms mirror a team: Jolteon for Team Yellow with the power of electricity, Flareon for the red team with the power of fire, and Vaporeon for the blue team with hydro power. However, just because you rep Team Instinct doesn't mean that you need to sport only a Jolteon. In fact, the most coveted evolved form is Vaporeon — and not just because it looks like the adorable offspring of a cat and a mermaid.

Once you have collected 25 Eevee candies, it’s best to evolve the Eevee with the highest CP and close to perfect overall stats, trading in the rest of your Eevees to Professor Willow for some more sweet, sweet candies to power up your new heavy hitter. Evolving is beneficial to both the trainer and the Pokemon, raising the Pokemon’s stats and CP and improving your standing as a trainer (the more Pokemon you evolve, the higher your trainer level will climb). Name your chosen Eevee "Rainer," and it will evolve into a Vaporeon.

So why do you want a Vaporeon? According to gamer blog Kotaku, they are the best choice for defending your local Pokegym. Vaporeon is not the most powerful Pokemon; it is ranked 13th on the Silph Road's list of Pokemon with the best combined stats. It sits behind legendaries such as Mew and Mewtwo, and other powerful Pokemon that are either rare or costly to evolve, such as Arcanine, Dragonite, and Blastoise.

Vaporeon has an attack of 186, a defense of 168, and a Stamina of 260. Flareon has better attack stats at 238 and slightly better defense (at 178), but its Stamina is half that of Vaporeon. Jolteon is lagging far behind, with an attack of 192, a defense of 174, and stamina of 130 — which gives it no advantage over the other two evolutions. Vaporeon's stamina level is second only to Chansey, Snorlax, and Wigglytuff, but Vaporeon outranks all of them with the power of its attacks.

You will definitely want a high-level Vaporeon in your Pokedex if you want to win some gym battles. Kotaku points out that Vaporeon's move "water gun" is doubly as effective as other Eeveelution's moves, and can be used frequently. "Vaporeon’s edge lies mainly in its high damage per second output, as well as its ability to take a hit thanks to high stamina," writes Kotaku. "And given that 'super effective' moves only do 1.2 times damage instead of the typical 2x in the main games, even monsters that are supposed to wreck Vaporeon don’t really pose much of a threat." If you want to be the very best, a Vaporeon may be your secret weapon!

More like this
Side Character Energy Has Arrived — Here’s What That Means
By Sophie McEvoy
The 'Hocus Pocus' Sequel Finally Has A Release Date & It Makes Total Sense
By Shannon Barbour and Radhika Menon
“The Door Is Always Open” For Another 'Breaking Bad' Spin-Off, Says AMC Boss
By El Hunt
Neil Patrick Harris Will Play 'Doctor Who's “Greatest Enemy” Yet
By El Hunt
Get Even More From Bustle — Sign Up For The Newsletter