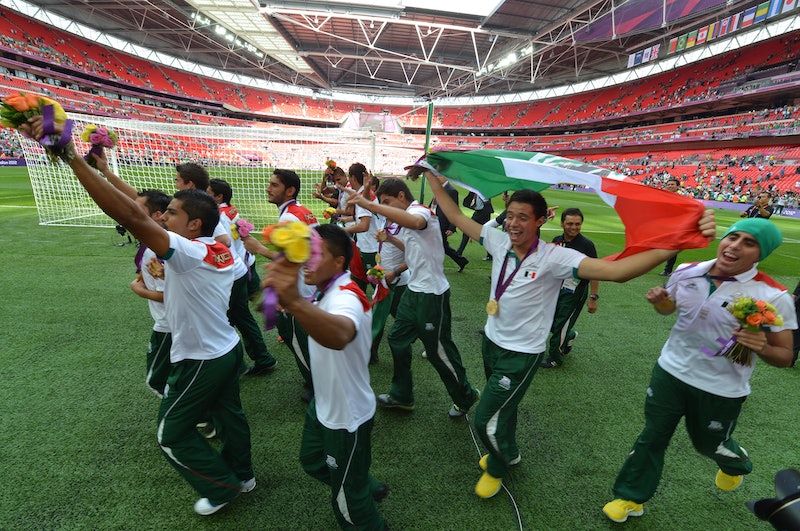 Whether you call it fútbol, football, or soccer, one thing is for sure — countries around the world are going for the gold in men’s football at the 2016 summer Olympic Games in Rio de Janeiro, Brazil. But who will take home the gold medal? (*clears throat* USA! USA! USA!) Well, it’s a little too early to tell, considering the first round of soccer matches haven’t yet commenced. But, football is one of the sports that will actually begin just before the opening ceremony, considering how many games must be played for the gold. So, let the games begin and get ready to memorize the men’s 2016 Olympic soccer schedule.

From the first round to the gold medal match, the soccer calendar will span from Aug. 3 to Aug. 20, with multiple matches on every game day. That’s a lot of football. While coverage of the events may vary, sports fans can stay apprised of the matches and which teams will face off in the quarter finals and onward with Rio 2016’s master calendar. And, to keep tabs on the important dates, I have your back. Here is the 2016 Olympic men's football schedule, with dates for first round, quarter final, semi final, and medal games. (And don't forget to check out the women's soccer schedule too.)

Before the 2016 Olympic Games officially kick off, the men’s soccer first round games commence on Thursday, Aug. 4. You can see the full men’s soccer schedule for Aug. 4 on the Rio 2016 site, but prepare to be watching games from the early afternoon way into the night.

Now that the games have officially begun, first rounds will continue on Sunday, Aug. 7. The full men’s soccer schedule for Aug. 7 is on the Rio 2016 site and once again, it will last from the early afternoon into late at night, giving you a full day of games to watch.

The final day of men’s “football” first rounds is Wednesday, Aug. 10 and the full schedule includes eight games over the course of the afternoon and night.

The four men’s quarter final matches will be held on Saturday, Aug. 13, so you don't need to worry about work getting in the way of these games, which begin at 12 p.m. ET.

Two teams square off for the bronze and fourth place titles on Saturday, Aug. 20 at 12 p.m. ET, so you might not want to make plans that afternoon.

...or for that night, as at 4:30 p.m. ET, the two final teams will battle it out for the gold. Maybe the home team, Brazil, will win their first Olympic men’s soccer title at the Maracanã? Whichever teams end up in this final match, it's sure to be an exciting one that Olympics viewers should not miss.

More like this
What Is Jeanie Buss' Net Worth? The Lakers President Is Uber Rich
By Hugh McIntyre
Jake Daniels Just Became The UK’s First Active Football Player To Come Out As Gay Since 1990
By Sam Ramsden
Conversations With Friends' Endometriosis Scenes Are As Brutal As It Gets
By Ivana Rihter
50 Years After Creating Her Alter Ego, Angelyne Is Still Driving That Pink Convertible
By Gretchen Smail
Get Even More From Bustle — Sign Up For The Newsletter