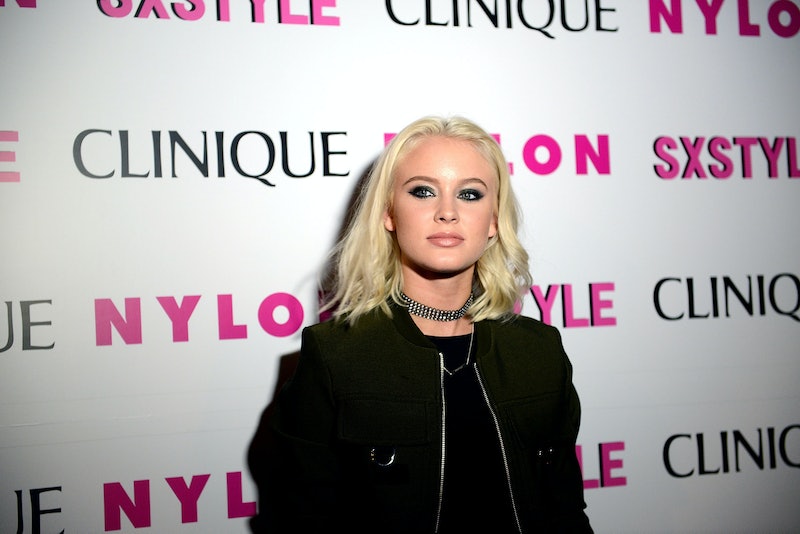 At first glance, the names of the 2016 MTV Video Music Awards Best New Artist nominees may not look familiar, but I'm sure you've heard their songs. Joe Jonas' band DNCE have been everywhere with "Cake By The Ocean," while New York rapper Desiigner is ruling summer with his jam "Panda." Lukas Graham will have you getting nostalgic with their hit "7 Years," while Bryson Tiller was getting a co-sign from Drake for his debut, TRAPSOUL. But, if you're wondering just who is Zara Larsson? Don't worry, I'm about to tell you, because she's someone you're going to want to watch out for.

Larsson is a Swedish pop star, but don't assume that she's just another Swedish pop star. The 18-year-old — yep, she's not even old enough to celebrate her nomination with an alcoholic beverage in America — may be from the capital of pop music, but she's trying to do her own thing with the style. Larsson won the Swedish version of America's Got Talent when she was just 10 years old, singing a rendition of Celine Dion's "My Heart Will Go On," which must be heard to be believed. Again, she's 10 here. Let that sink in.

Eight years later, Larsson's earned her first American hit with "Never Forget You." Seriously, once you realize she's the voice behind this dance track, which has her teaming up with British singer MNEK, you'll have trouble forgetting her. Though, the fact that Larsson once fit her foot inside a condom to prove there's just no good excuse for not wearing one could also be a reason you'd remember her. That is pretty memorable, after all.

Back to her music though. Larsson will definitely give you some Tove Lo vibes with her voice, but she's making also making waves in the EDM world thanks, in part, to getting the opportunity to lend her voice to David Guetta's anthem "This One's For You," the official song of the recent Euro 2016 soccer championship. It has a bit of the dancehall tinge Larsson showed off on her first single, 2015's "Lush Life," which wasn't huge here, but went No. 1 in her native Sweden. On this clap-happy track, Larsson talks about fleeting summer love that is perfect for soundtracking all your warm weather crushes. It's like the best Rihanna song RiRi never made.

But it's "Never Forget You" that has people pressing repeat and wondering who the young woman behind this voice is. A woman, who by the way, is making her stake in the pop world while still wearing braces. The song, which marks her first writing credit and, she says, was inspired by Justin Bieber, gives the world a sense of the burgeoning pop star it has on its hands. The girl knows how to write a hook, that's for sure.

If her music wasn't enough to win you over, Larsson's feminist blog posts are bound to get you listening. When asked by Fuse about her man-hating ways — something she fully owns up to saying she wears it as a badge of honor — Larsson said equal rights is a no-brainer for her. She speaks her mind and doesn't really care what men think — even if they do care about what she's saying. "I have received a lot of hate," she told Fuse, adding, "It's actually really crazy how people can be so upset about something so basic when it comes to human rights."

Being that Larsson's the only woman in this category, I bet she has some things to say about equality. The world is certainly ready to listen.