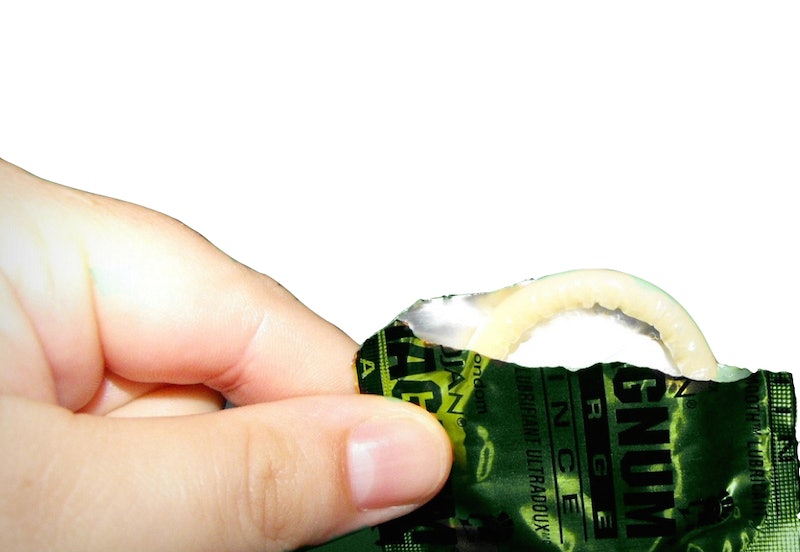 Knowing everything we know about pregnancy, STIs, and all the other less fun sides of sex, I’m kind of astonished people still make the excuse not the use condoms. But hey, the next time anyone tries to tell you that their penis is too big for a condom, just show them this picture from 17-year-old Swedish pop star Zara Larsson. “Too big?” Is your dick the size of a woman’s leg? No? Then you’re not too big for one. Deal with it. (And also maybe don’t bang them, because anyone who whines about wearing a condom instead of being mindful of all participants’ health and safety probably isn’t worth your time).

Larsson, who won the talent competition Talang (Sweden’s version of the Got Talent format) in 2008, posted the image seen here on her Instagram account on Monday. It features her leg clad in a condom up to her knee along with the caption, “To all the guys saying ‘my dick is too big for condoms,’ TAKE A SEAT” — and naturally, it quickly went viral. As of this writing, it’s garnered almost 60,000 likes, as much for its humor as for its point; it’s also being hailed by many as a great feminist act (or at least a really good feminist joke).

Ready? Here it is:

Not going to lie: I giggled.

Larsson, for her part, has noted that she didn’t intend to make a big, huge, feminist statement; she wrote on her blog (translated from Swedish to English via Google Translate, so excuse the stilted language), “I did it as a fun thing only. Then I see how newspapers write about what a feminist genius I am!” She’s a little baffled by the fact that she’s being called a genius (“do you even know what a genius is?”), and she thinks it’s important to note that her photo is a drop in the bucket compared to the work that so many feminists are doing that often goes unnoticed: “I, personally do not consider myself to be some kind of Holy Mary of feminism,” she wrote. “I am fully aware that there are many, many girls who are better than me at this [in] so extremely many ways and who receive little attention.” She finished up with a TL;DR stating, “There are an incredible number of young girls who would deserve attention for their feminist ideas and texts instead of moi.”

That said, though, even if it’s not necessarily a feminist act, I still think it’s a hilarious way to make a good point. Sex is fun, but unplanned pregnancy and STIs aren’t. Wear your damn condoms, people.

Also, as commenter and sex educator SugarHill pointed out over at Jezebel, it’s worth noting that while “there’s no ‘too big for condoms’… there absolutely is ‘may be too big for a regular condom to operate at peak effectiveness’”:

“Magnum condoms (while frequently used by idiots who delusionally [sic] think that pulling out the gold packet will make women think their penis is four inches bigger than it actually is) are not just vanity. Stretching out latex makes it more likely to break so, while it may fit, that also makes it less likely to withstand friction. Condoms that break are less effective — you can get pregnant and may discharge substances you never wanted to see come out of your body. On the other side of the spectrum, condoms can be too big as well. Use a condom that fits your partner and is comfortable for you.”

True that. SugarHill also took a moment to inform us that, as funny as blowing up a condom like a balloon can be, “accidentally inhaling lubricated latex air is really unpleasant. Just FYI.” SugarHill? You win the entire comments section.

For the curious, here’s what Larsson’s music sounds like:

More like this
13 Ideas To Add To Your Sex Bucket List
By Kristin Magaldi
35 Sexy Texts To Send Your Partner
By Griffin Wynne and Carolyn Steber
What Are Swingers? Everything You Need To Know
By Lexi Inks
The 13 Sexiest Movies On HBO To Stream Now
By Alyssa Lapid and Lia Beck
Get Even More From Bustle — Sign Up For The Newsletter