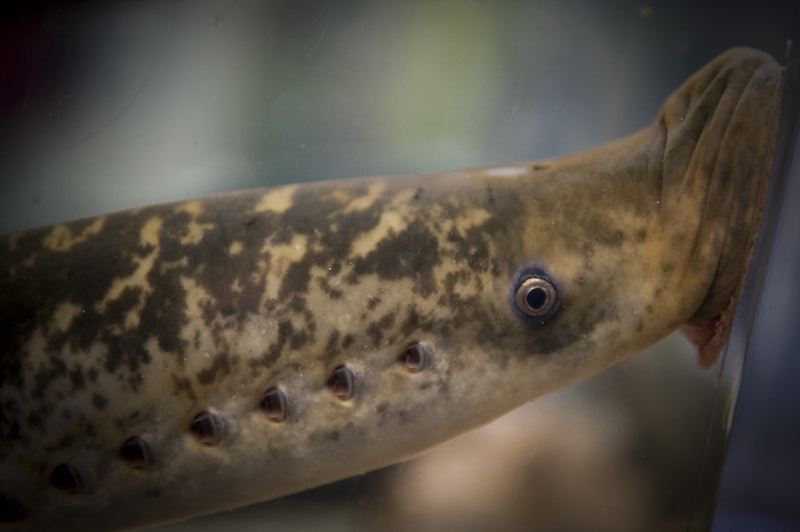 There are a few things to remember about science fiction/horror b-movies: The dialogue will almost always be bad, the special effects will be terrible, and the actual science will be pretty much nonexistent. I mean, sharks in tornadoes? Come on. The only way to defeat a sharknado is with a bomb? OK, we've completely forgone the science for the fiction — but that's what makes these so-bad-they're-good movies fun to watch. So, with that in mind, you still might be wondering whether the sea vampires from Beast of the Bering Sea are real.

Well, after some research, I can tell you that sea vampires are definitely not a thing; they fall more in line with other ridiculous b-movie creatures like a sharktopus or a piranhaconda. Sure, I can kind of understand the biology of a sea vampire — there are depths of the ocean that light can't penetrate, which would totally be the perfect place for a vampire (if those were, y'know, real). Plus, the look of the sea vampires from the Beast of the Bering Sea trailer seems to portray the monsters as psychotic manta rays/bat-like creatures — with fangs, of course. But, while sea vampires may not be real, there are plenty of horrifying creatures that inhabit the Earth's waters, whether it's the ocean or freshwater rivers and lakes.

In fact, there are a couple water-inhabiting creatures that have a nickname relating to vampires. First off, there's the payara, which is more commonly referred to as a vampire fish. It resides in the Amazon River and is "prized for its meat" according to National Geographic. Fun fact: The vampire fish eats smaller fish like piranhas (y'know, the fish that haunts the nightmares of people around the world). Plus, its teeth can grow to be six inches long — six inches.

Another fish nicknamed a vampire is the lamprey, which made headlines last year when lampreys were reportedly being found on land in Alaska, seemingly dropped out of the sky. According to CBS News, wildlife officials believed the fish were being scooped up by birds and dropped elsewhere. But, lampreys receive their nickname as vampire fish because of their means of feeding: Latching onto other fish and eating their blood and fluids. Grossed out yet?

One last ocean creature to adopt the vampire distinction is the vampire squid, which, according to the National Oceanic and Atmospheric Administration, is a cephalopod that has characteristics of both squids and octopi. The vampire squid got its name from its dark coloring, "cloak-like webbing," and bright blue eyes. But, unlike the other fish that are called vampires due to their scary teeth or feeding habits, the vampire squid doesn't eat blood; instead, it lives on biological debris, also called marine snow.

So, while sea vampires may not be real, there is plenty to be afraid of in the ocean and I wouldn't blame you if you wanted to stay away from the beach or the Amazon River for a little while. But, there's nothing to be afraid of in Beast of the Bering Sea.

More like this
'Stranger Things' Star Joe Keery Is Dating An "Indie Scream Queen"
By S. Atkinson and Grace Wehniainen
Shocked Fans & Former Co-Stars React To Ray Liotta’s Death At 67
By Grace Wehniainen
Everything To Know About Marvel’s 'Thor: Love And Thunder'
By Grace Wehniainen
Sadly, 'Fantastic Beasts: The Secrets Of Dumbledore' Isn’t Streaming — Yet
By Arya Roshanian
Get Even More From Bustle — Sign Up For The Newsletter