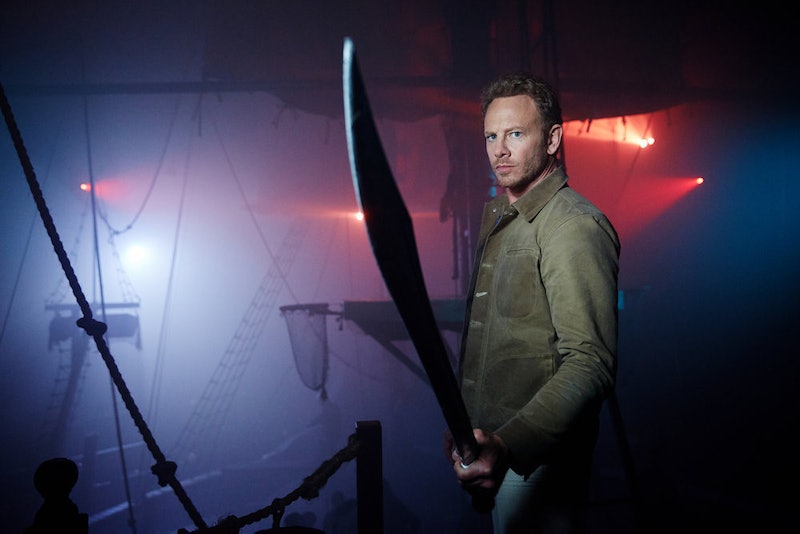 Whether you want it or not, Sharknado is back. The annual guilty pleasure has become a summer staple and to promote the fourth installment — Sharknado: The 4th Awakens — Syfy is providing a hearty schedule for Sharknado Week 2016. Taking a page out of Shark Week's book, this is Syfy's third annual week-long programming focused on all things shark. But unlike Discovery's Shark Week, Sharknado Week embraces the absurd hilariousness that fans have come to expect from the Ian Ziering franchise, so expect Sharknado Week to be far more entertaining than educational.

What's a better way to spend a summer week than by watching gruesome films about everyone's favorite aquatic animal? Well, Sharknado Week will provide you with plenty to fear and plenty to laugh at. Many of the movies will have repeat showings during the week, which runs from Sunday, July 24 to Sunday, July 31, so if you miss a movie during its first run, you can catch it on its second or third. However, I'm here to help if you're worried about missing any gory or ridiculous moments. Check out the programming of Sharknado Week below, starting at 7 p.m. on July 25, and then look for my suggestions on which movie you should make a must-watch for the week. Trust me, it's what David Hasselhoff would want you to do.

Kick off your Sharknado Week with Dam Sharks! pretty much just because Syfy's description of the movie is, "Sharks in a dam. The worst" and that's enough for me.

7 a.m: Beast of the Bering Sea

If you're going to watch a Lake Placid film, go with the Bill Pullman original. For Sharknado Week, I recommend checking out the premiere of Ice Sharks about scientists escaping sharks who somehow broke into a military base.

Mix some global awareness into your B-movie week with Planet of the Sharks, which envisions a future where glacial melting has left most of the earth under water and sharks are now in charge. Bonus movie? Set the DVR for Eye of the Beast solely because it features Dawson himself — James Van Der Beek.

Choose your own adventure based on which late '80s and early '90s star you prefer. If you were a fan of Debbie Gibson's music, then Mega Shark vs. Giant Octopus is for you since she stars in it. If you prefer the original Buffy the Vampire Slayer movie, Kristy Swanson stars in Swamp Shark.

Start wrapping up your Sharknado Week with an 11-year-old Syfy movie — Chupacabra: Dark Seas. You'll need to set the DVR unless you're up at 3:30 a.m., but seeing John Rhys-Davies in this film will be worth it.

Spend your Saturday indoors with the three Sharktopus movies — starting with Emma Roberts' dad (and Julia's brother!) Eric Roberts in the first Sharktopus and wrap it up with Sharktopus vs. Whalewolf — because yes, someone imagined a killer whale-wolf hybrid.

You know what to do. After the week-long buildup, you are more than prepared for an eight-hour marathon of all four Sharknado movies, which wraps up with the premiere of Sharknado: The 4th Awakens. Check out Ziering, Hasselhoff, Tara Reid, and Gary Busey in all their shark-killing glory. After watching Sharknado Week, you've earned it.

More like this
‘Squid Game’ Creator Hwang Dong-Hyuk Just Dropped A Major Season 2 Tease
By Brian Anthony Hernandez and Bustle Editors
These 25 International Horror Movies On Netflix Prove Fear Is A Universal Language
By Bustle Editors
The 'Bachelor In Paradise' Schedule Shifts To 4 Hours Every Week After The Season 8 Premiere
By Brad Witter
Paul Mescal, Man Of Mystery
By Samantha Leach and Heather Hazzan
Get Even More From Bustle — Sign Up For The Newsletter