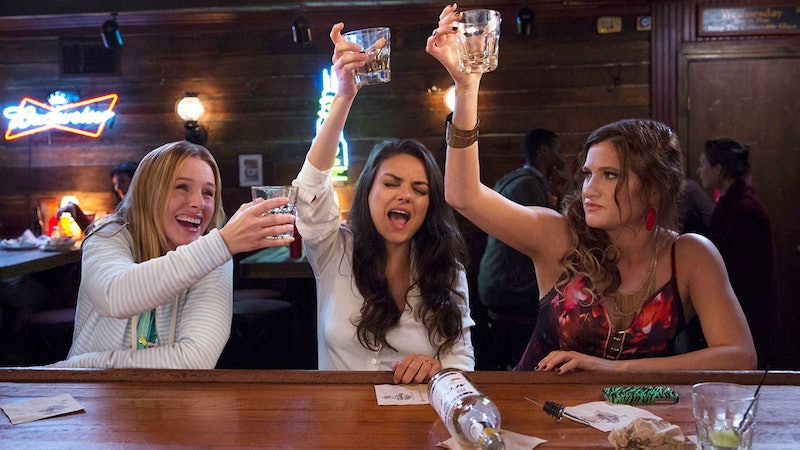 Bad Moms, starring Mila Kunis, Kathryn Hahn, Christina Applegate, Jada Pinkett Smith, and Annie Mumolo, is a hilarious summer film. But not only will it make you laugh out loud, it's also incredible touching. In a series of interviews played during the film's credits, the actors speak to their moms about growing up, and of course, motherhood. So when I had the opportunity to sit down with Kunis, Applegate, Hahn, and Mumolo, I was curious to know: What's the best — and worst — advice their mothers have ever given them?

For all four of the comedic actors, coming up with pearls of wisdom from their mothers was the easy part. "My mom is such a survivor," Applegate says. "It was just us, and that survival skill that she has, I've taken that on as well. I'm trying to give that to my daughter. I don't ever want her to think that there isn't good on the other side of pain."

"Overcoming loss and surviving loss is one of the most important lessons," Mumolo says, who has two kids of her own. It's hard to wrap your head around when you're little. Things that are challenges are really blessings in disguise. I'm like, 'This is actually good!' And they're looking at me like, 'What the f*ck are you talking about?'"

Applegate reveals that her daughter, Sadie, has a tendency to "be a fatalist," when it comes to bad news. "I'm always like, 'I'm telling you right now, what you're feeling right now is frustrating, I'm frustrated too, Sadie, but there's so much good on the other side of this. Have your pain, go freak out, go throw stuff or whatever you need to do, but the other side is good.' I'm trying to help her with that."

Growing up, Applegate was raised by her single mother in Hollywood. The 44-year-old has been an actor in the industry since she was a young girl, and became immune to the concept of rejection at a young age. "I was a child actor, so I was having more rejection than most kids my age because I was going on auditions. Out of 20, you get one. So I'm hearing, 'You're not enough' 19 times out of 20. My mom really helped me with that. She'd say, 'Christina, this or something better.' And every time I'd get upset about a job I didn't get, the something better came along that I wouldn't have been able to do if I was doing the other thing."

She sounds like a fantastic mother and support system, but enough with the good stuff, I want to hear what terrible advice these moms have gotten from their own mothers. "Oh, everything else," Applegate jokes. Mumolo says the hardest part of her relationship with her mother is that unlike Applegate's mom, Mumolo's mother knows nothing about Hollywood. "My mom blames everything on Hollywood. If I have an experience she doesn't understand, she's like, 'Well, you're in Hollywood, so I can't help you. The reason this is happening is cause you went to Hollywood.' But I'm like, 'What the f*ck are you talking about?'"

Mila Kunis is another actor who has a mother outside of the realm of Hollywood. When she had her daughter Wyatt (with fellow actor and husband Ashton Kutcher) nearly two years ago, Kunis' mother offered some sage guidance. Kunis says:

When Wyatt was maybe a day or two old, my mom was holding Wyatt, and she said, 'Look at that, she's peeing,' and I was like, 'What are you talking about?' And she was like, 'Her nostrils are flaring and turning white, that means she's peeing.' That's something only a mother would know. From that point on, I always knew when my kid was about to pee. My mom said I did the same thing.

For Hahn, her mother's best advice came when her son Leonard was a newborn. The 43-year-old actor recalls a visit from her mother: "She said, 'Your house is too clean for a newborn.' And I was like, 'What are you talking about?' Because I was determined to keep it the same ridiculous level of clean it was before my kid. I was a sobbing mess cleaning, and she was like, 'Just relax. Let some dishes pile up. It's OK.' And that was such a good piece of advice for me back then, just to chill the f*ck out."

Hahn and Kunis share the shame worst advice from their mothers: clean your plate. "That's the one thing my parents always made me do," Kunis says. "So now it's that I have to finish my plate, and my daughter has to finish her plate. My husband is like, 'She's not hungry.' I'm like, 'Yes, she is.' You know that thing inside of you that's supposed to tell you when you're full? I clearly don't have it. I have to tell myself I'm full because I was raised where you just f*cking shovel food."Kunis admits that eating until she is way too full — until her plate is "clean" — is something she still does today. "One hundred percent," she says, "And I instill it into my daughter."But it's not only that these actors' parents instilled this habit into them. "You know what it is? My husband pointed this out," Kunis explains. "He thinks it's because as actors, we have breaks. With what we do, our lunch break is like 20 minutes long. You have 20 minutes to relax, eat, go through touch ups... so you're literally like eating as fast as you can. So when we do have the ability to sit and relax and eat, he'll eat his burger in two bites. I'm like, 'Take your time!' And before I can finish my sentence it's gone. Fail."The biggest takeaways from these hilarious ladies? Love your kids, and take time to chew your food. Bad Moms is in theaters July 29. Images: STX Entertainment [2]