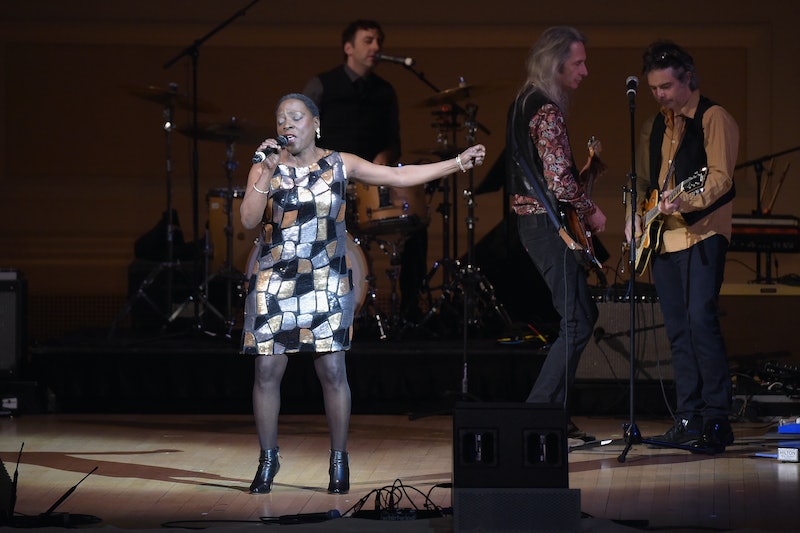 There's a new documentary coming to theaters, and you won't want to miss it. The new Starz film Miss Sharon Jones! hits theaters starting July 29, and it tells the moving story of R&B singer Sharon Jones, who has overcome some tremendously difficult circumstances to make it to the top. Jones' lifelong dream was to be a singer, but for a very long time, the odds didn't appear to be in her favor; as the trailer states, music industry representatives told her that she was "too black, too fat, too short and too old" to succeed. Yet she continued to pursue her dream, finally garnering recognition in the '00s and even receiving her first Oscar nomination with her band the Dap-Kings in 2014, at the age of 58. Miss Sharon Jones! chronicles the singer's ascent to stardom, but it also addresses an unexpected wrench in Jones' journey: her 2013 diagnosis of Stage Two pancreatic cancer.

Throughout the documentary, Jones demonstrates tenacity in both her career and her battle with cancer. The singer's resiliency is perfectly demonstrated in the exclusive clip from the movie below, taken during a February 2014 performance at the Beacon Theatre in New York City. The clip opens on Jones and two other women holding hands in a circle, their eyes closed as they pray for Sharon before she goes onstage. The camera then cuts to the Dap-Kings preparing to play in front of a huge adoring audience, while Jones is backstage trembling in a chair. It is the first show since she took a break from performing to undergo chemotherapy, and her nervousness is palpable. But the second that Jones' name is called and she steps onstage, her anxiety appears to melt away and she is transformed info a confident, charismatic star. Take a look at the clip for yourself, and don't try to fight the feels.

It is a hugely symbolic moment, representing the singer's determination to claim her rightful place in the spotlight. And although Jones revealed at the film's September 2015 premiere that her cancer had returned, her spirit is simply indomitable. “I start chemo on Wednesday,” Jones told the audience at the premiere, as reported by IndieWire. “But I’m gonna keep fighting. We got a long way to go.” It is safe to say that Jones' journey is far from over.