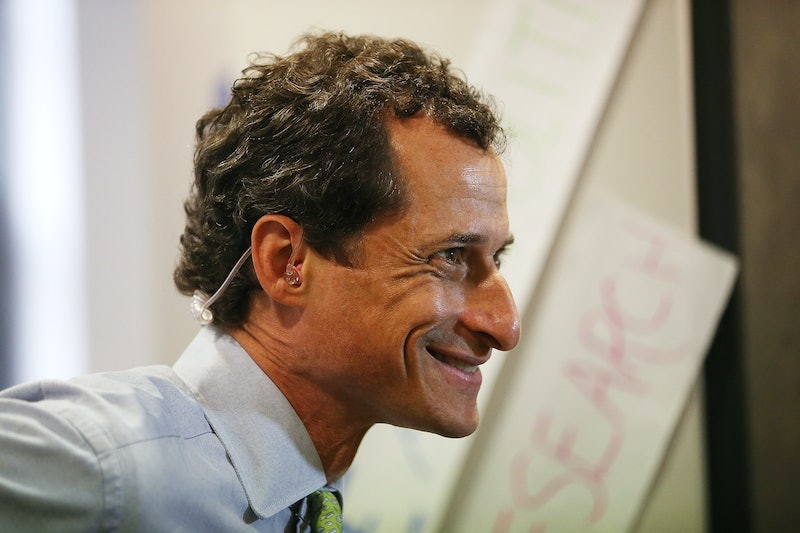 There are many things you could say about bulge-texting former Congressman Anthony Weiner. You could say that he has a braggadocio seemingly undaunted by the fact that sexting ended his political career (twice), or that he sort of looks like that one orc from The Two Towers. But you can’t deny that he’s passionate about politics, even now in this new, post-politics period of his life.

Which is why, despite the seat-squirming discomfort of his attempts at humor on his visit Monday night to The Late Show with Stephen Colbert, you could see a glimmer of the silver-tongued Brooklynite who used to rail (rather satisfyingly) against all manner of GOP ridiculousness.

“Bernie Sanders is great, we love Bernie,” Weiner said. “The difference between Democrats and Republicans is that Hillary people mostly loved Bernie Sanders, and Bernie Sanders people mostly loved Hillary.” When Colbert pushed back, having spoken to Sanders supporters who rejected the idea of unity in the party, Weiner didn’t give in. “They want national healthcare, and Hillary wants that. They want a $15 minimum wage, and Hillary wants that.”

But a forceful and emotional articulation of why, say, the average Bernie Sanders supporter should support Clinton, it was not. Like so much else in the rise and fall of Weiner’s political career, there was the unmistakable air of egotistic infallibility. “Look, I cried when Hillary Clinton lost to Barack Obama,” Weiner said. “I was like that last guy, like the Chinese guy in front of the tank, I was the last person to endorse Obama. But now you’ve seen eight years of remarkable growth. To hear Donald Trump, you’d think we live in a lousy country.”

Aside from the tasteless comparison of himself to the victims of the Tiananmen Square massacre, his only view into what Sanders supporters are experiencing right now is how he felt when he was on the other side of the coin. Except that’s not quite right. When Clinton lost to Obama in 2008, it was an insurgent grassroots candidate triumphing over the seemingly predestined establishment candidate, and, well, it’s not quite the same feeling when Goliath beats David.

Still, Weiner’s best moment probably came in his defense of the nominating process, which many Sanders supporters have claimed was rigged for Clinton. “Bernie Sanders ran a great campaign, got a lot of votes, and frankly, all these rules that people complain about are made by the individual states, and they’ve done a great job choosing nominees. Barack Hussein Obama got elected through this system, so stop complaining about this system. Your candidate did very well, we’ve adopted a lot of Bernie’s ideas, we’re a better party, now we’re going to go on to win the election.”

As for his advice to Clinton, as a former representative of Queens, on how best to debate Queens’ own Donald Trump? “If I were Hillary, I would yield all of my time to Donald Trump.” The line got a few laughs, but it’s clear that, for the time being, we’re better off with Carlos Danger on the sidelines.