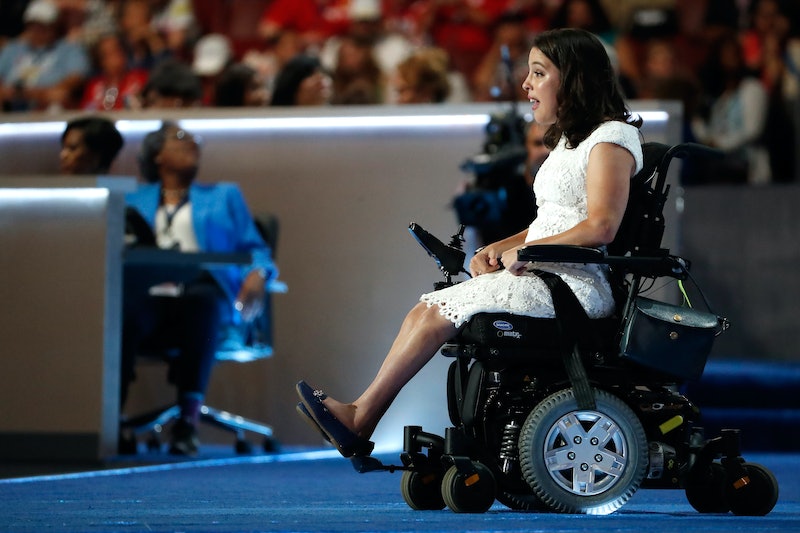 Thanks to the efforts of #CripTheVote, RespectAbility, RevUp, and other disability advocacy movements, there's been much more conversation around disability in this election than ever before, which is tremendously exciting. Though the U.S. Census identifies approximately 20 percent of the population as disabled, we are often invisible in media, pop culture, and policy frameworks. I was excited to see how disability rights advocacy would affect the Democratic platform for the 2016 election, and I have to say that I'm pretty blown away. While not perfect (and when is anything or anyone perfect, except for Michelle Obama?), it's an incredibly solid document that does some important, innovative things.

On the very first day of their gathering in Philadelphia, the Democratic National Convention put its money where its mouth was when disability rights activist Anastasia Somoza spoke on the convention stage — and she was just the first of several disability speakers slated to appear during the convention. Seeing a disabled woman talking about her life and her advocacy work felt incredibly empowering, as though I had become an active participant rather than a passive subject of politics.

During a highly contentious day in which calls for party unity were drowned out by screaming from the convention floor, the Democrats consciously chose a diverse spectrum of speakers, sending a clear message: This isn't about tokenism. It's about inclusion. The platform recognizes disabled people and other marginalized groups as whole people, not special interest groups who should be walled off from the rest of the platform.

For me, this is huge. It validates the work disability rights activists have been engaged in for decades, and it lays the groundwork for a potentially even more inclusive platform in 2020.

If you glance at the table of contents in the platform document, the situation looks grim, with just a single reference to disability rights. But it would be a mistake to stop there, because the DNC platform is doing something really important, and unique: It's weaving us throughout the platform, recognizing that we are a vital part of society and that we cannot be separated out from issues like employment and housing.

These are America's issues, and they are our issues, and the DNC is recognizing that in a dramatically inclusive way, right from the start, when the preamble states that: "We believe in protecting civil liberties and guaranteeing civil rights and voting rights, women's rights and workers' rights, LGBT rights, and rights for people with disabilities." The platform has included disabled people before, but never so comprehensively, making this a landmark moment. The platform is positioning us as an integral part of the electorate, despite its unfortunate use of person-first language, which is growing outdated in response to shifts in the way people think about disability.

The platform also calls out better access to home healthcare, housing inequalities, education disparities, and civil rights barriers. When it talks about the racial wealth gap, it gets explicitly intersectional, noting that racial disparities are compounded by other issues, including disability status. Though the document heavily focuses on the Americans with Disabilities Act (ADA) to the exclusion of legislation like the Disability Integration Act, which reinforces our right to live in the community, it reflects a genuine desire to affirm and protect disability rights throughout — including through the ratification of the Convention on the Rights of Persons with Disabilities, which has been ratified by nearly every nation on Earth with the exception of noted human rights advocates like Libya, the Central African Republic, Somalia — and the United States.

Recognizing the issues that keep disabled people from the polls, the DNC platform references disability in the voting rights section, specifically discussing the effects of inaccessibility and voter identification. Reproductive rights, a big issue in this election, also comes up in the platform, which specifically identifies access barriers for disabled people (not least of which is that many nondisabled people desexualize disability, assuming that disabled people wouldn't have need for such services).

This is but a step: the Democrats still have work to do. But this year, the party has made huge leaps and bounds for disability equality, from the Clinton campaign's conscious work to make materials accessible, to a thoughtful platform clearly developed with input from disabled stakeholders. Though just 6 percent of delegates explicitly identified as disabled, they represented a shift in a landscape where disabled people have historically been kept out.

For me, this is huge. It validates the work disability rights activists have been engaged in for decades, and it lays the groundwork for a potentially even more inclusive platform in 2020. I'm proud of the level of collaboration that went into this, and I'm hoping that Secretary Hillary Clinton will distinguish herself as a radical champion for disability rights.