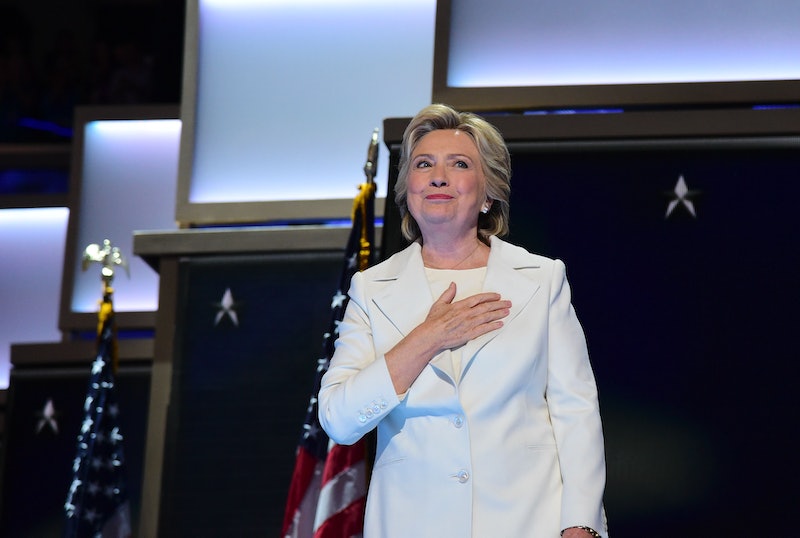 When Hillary Clinton became the first woman to accept the presidential nomination of a major political party at the Democratic National Convention, history was undoubtedly made. Her acceptance speech was hailed as groundbreaking, and provided insight into her upbringing, as well as her views on a wide range of issues. But one thing that was largely missing from Clinton's speech, as well as some of the other celebrated speeches from the DNC, was a concrete outline of foreign policy — something that Republican National Committee Chairman Reince Preibus was quick to pounce on after the first day of the event.

“The fact that we heard zero mentions of ISIS or terrorism from any of the speakers on the first night of the DNC only confirms how far Democrats have their heads buried in the sand on national security issues,” Preibus said in a statement reported by Bloomberg Politics.

You could say this was a classic case of hypocrisy, as the Republican Party hasn't exactly escaped criticism for shirking the main issues or of going so far right with their social and political views that they are in danger of falling off the political map. But refuting the Preibus statement would be a flawed argument. In fact, Preibus has a good point, even if his version of foreign policy discussion was rooted in ad hominem attacks.

The first day of the RNC was so jam-packed with foreign policy discourse that it resembled some kind of military extravaganza show, with all targets pointed toward Clinton. In fact, it was so filled with anti-Clinton rhetoric that it prompted a Washington Post blogger to call the RNC's first day "despicable."

Reibus and the RNC thought to address foreign policy concerns on the first night of the RNC by highlighting Sean Smith's grieving mother. Smith was a State Department information specialist who was killed in the 2012 attack in Benghazi, Libya on the U.S. Consulate, along with three other Americans, including U.S. Ambassador Christopher Stevens. During his speech, Preibus quickly returned to his anti-Clinton foreign policy arguments: "A Clinton presidency means forgetting our friends and enabling our enemies. Just look at her disastrous Iran nuclear deal, which lined the pockets of the world's number one state sponsor of terrorism with your money, while abandoning our greatest ally in the Middle East, the nation of Israel."

But such discourse does not really equate with outlining foreign policy. And in some ways, neither does the presentation provided on the first or subsequent days at the DNC.

The celebrated speeches made by Elizabeth Warren and First Lady Michelle Obama focused on important domestic issues. Bernie Sanders' DNC endorsement, which praised those who supported his "political revolution," focused on the minimum wage and income disparities, but avoided foreign policy altogether. Those speeches may have been focused on a theme of unity, and talking about the concerns at home may have been the best way to achieve that. But while unity is a great rallying point, the recent spate of ISIS-related attacks in Germany and France, as well as the threats posed by North Korea, can't be overlooked.

Former Defense Secretary Leon Panetta offered praise for Clinton's record as secretary of state, calling her "the single most experienced and prepared person who has ever run for president of the United States," crediting Clinton with the takedown of Osama bin Laden, while also mentioning the recent ISIS attacks in Europe. And he also brought to the forefront Trump's incredulous (yes, incredulous even for Trump), call to Russia to look into Clinton's personal server. Further adding to the praise was Marine General John Allen, who, surrounded by several retired military leaders, told the DNC that "we trust her judgement," and "that she, as no other, knows how to use all instruments of American power — not just the military — to keep us all safe and free.”

But are these endorsements rooted in a belief that the general public will appeal to authority, or are they substantiated with a clear outline?

President Obama's DNC speech offered perhaps the strongest support and insight into why Clinton would make the a great commander in chief. Arguably providing one of the most powerful endorsements a sitting president has ever offered for a presidential candidate, he praised Clinton's work as secretary of state, saying he had a "front-row seat to her intelligence, her judgment, and her discipline." Obama later added that his close working relationship helped him see "that her unbelievable work ethic wasn't for praise or attention — that she was in this for everyone who needs a champion. I understood that after all these years, she has never forgotten just who she's fighting for."

They know Hillary. They've seen her work. She's worked closely with our intelligence teams, our diplomats, our military. And she has the judgment, the experience, and the temperament to meet the threat from terrorism. It's not new to her. Our troops have pounded ISIL without mercy, taking out leaders, taking back territory. I know Hillary won't relent until ISIL is destroyed. She'll finish the job — and she'll do it without resorting to torture, or banning entire religions from entering our country. She is fit to be the next Commander In Chief.

Clinton further addressed her foreign policy in the DNC by saying that she had laid out a strategy for defeating ISIS:

We will strike their sanctuaries from the air, and support local forces taking them out on the ground. We will surge our intelligence so that we detect and prevent attacks before they happen. We will disrupt their efforts online to reach and radicalize young people in our country.

But were those two speeches enough to silence the RNC attacks regarding Libya and how the Obama administration handled the aftermath of Benghazi? And were they enough to convince the American people that Clinton's foreign policy is effective? That remains to be seen, but what unquestionably needs to be provided in the near future are concrete examples of foreign policy and how it will be executed by a Clinton administration.