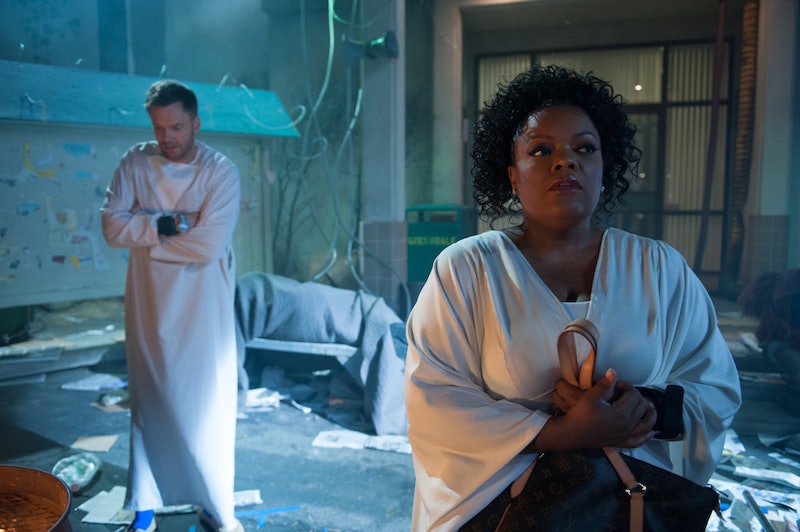 So, Community has officially entered the digital age now that it's done an entire episode about a smartphone app. Does it get a little ornery and preachy at times? Sure. And in any other show, the message would essentially boil down to, "You young people are on your phones too much!" But it's Community, so of course it goes completely off the rails and becomes about needing control and approval from other people in the real world.

The app that takes over Greendale is called "Meow Meow Beans," and it's essentially Yelp for people. Sure, it starts off as a popularity game, but it quickly devolves into a dystopian society where the people with five "meow meow beans" make the rules while those with only one are banished to "The Outlands." "Didn't we just do a themed episode about a dystopian society last month?" you ask. Sure, but this one has silly robes and an unexplained brief cameo by Tim and Eric. So... there.

Of course, when Shirley becomes a five, Jeff has to develop a master plan to upstage her in the virtual popularity contest. And naturally, when Britta realizes the injustice of a social media-based system of rule, she has to stage an uprising (and she finally gets people to listen to her by putting mustard on her face?). Jeff and Britta end up working together, which is always a lot of fun, but ultimately, this episode is about Jeff and Shirley. Both of them admit their need to control others, and both of them learn to respect each other more. Hugs and warm fuzzies all around.

As for the app? Sure, it may be a little too controlling in the episode, but it's surprisingly accurate. Think about it: most of social media is more or less a form of rating other people anyways. Let's just hope that no one ever gets around to actually making this thing, because who knows... we could all end up at a community college on a Saturday in drab jumpsuits, wondering what the hell just happened.