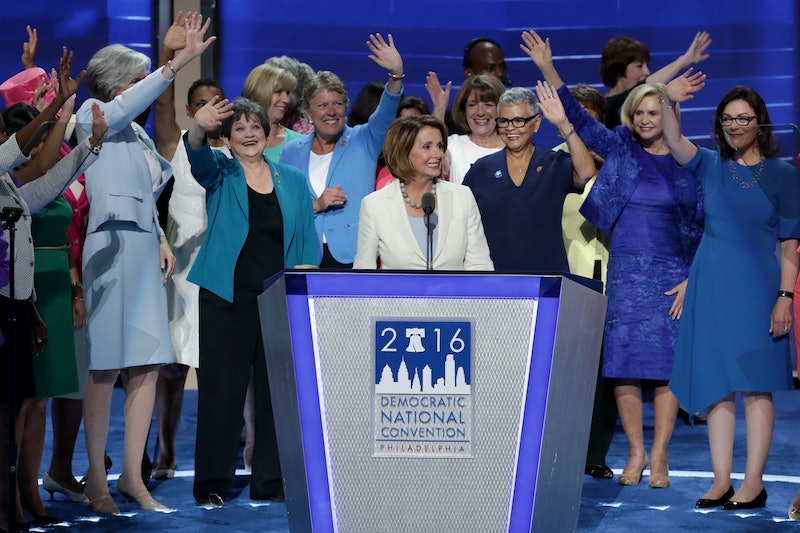 On Tuesday, Hillary Clinton became the first woman ever officially nominated as a major-party candidate for president of the United States. Nancy Pelosi, minority leader of the U.S. House of Representatives, took to the Democratic National Convention stage, joined by dozens of her fellow female representatives, to highlight not only the historic nature of Clinton's victory, but to push for policies that will support women in their careers and with their families. The theme of Tuesday's convention was, appropriately, "A Lifetime Of Fighting For Children And Families." Check out the transcript of Pelosi and the Democratic women's speech below.

We heard from 10 of the female representatives on the stage, who all expressed the sentiment that the Democratic Party, and Clinton at its head, would move the country forward in a number of areas. Some touted the party's positions on gun control, veteran services, and corporate taxes, while others focused specifically on women's issues in light of Clinton's historic moment, including equal pay, empowering female business owners, affordable child care, and women's reproductive rights. Pelosi kicked it all off with a reminder of how much progress women have made in the country's history. Check out what the representatives had to say.

Good evening! In 1776, here in Philadelphia, our founders established this country. Ninety-six years ago, America's women first won the right to vote. Twenty minutes ago, we all witnessed history as we nominated the first woman for president. We are preparing to shatter the highest, strongest marble ceiling in our country by electing Hillary Clinton President of the United States.

Hillary Clinton knows that this moment is not just about one woman's achievement, but about what a woman president will mean for generations to come — for the dreams and hopes and aspirations of every woman and every girl and boy all across our land.

The Democratic women of the House are leading the way to unleash the power of America's women and working families — in our economy, in our society, and in our democracy. Nothing is more wholesome for America than the increased participation and leadership of women in government and politics.

Here, tonight, are women leaders who personify the integrity, imagination, and idealism and, indeed, the courage that will build a stronger America for hard-working families. Like Hillary Clinton, they have spent their lifetimes fighting for women and children. And in November, we will affirm the great truth of our country: when women succeed, America succeeds!

I'm Congresswoman Doris Matsui of California! Today, the success of women is more important than ever to the strength of working families. Women are fueling the future of the American economy. That's why House Democrats created the economic agenda, When Women Succeed, America Succeeds. We have four keys to unlock the full potential of women and working families: fair pay — raising the minimum wage and ensuring equal pay for equal work; paid leave — empowering women and men to balance the responsibilities of work and family; affordable, quality child care; and strengthened retirement security for women to enter their twilight years with confidence and dignity. We will fight Republican attempts to weaken Social Security.

Hillary Clinton stands with us. And we stand with her on every one of these commitments. Together, we will build a stronger America for all our families.

Donald Trump and Republicans in Congress have other priorities: meddling in women's most intimate decisions; jeopardizing women's health; even criminalizing women's choices. When it comes to the issues between women and their doctors, House Republicans misrepresent, they intimidate, and they undermine. In this Congress alone, they've voted 14 times to attack women's health.

Republicans continue to attack the Affordable Care Act while it provides newfound health security to millions of Americans. Because of health care reform, no longer can insurance companies charge you more just because you're a woman. And for the first time in history, no longer is being a woman a pre-existing condition! Democrats are fighting back against the Republicans' anti-women crusade. It's 2016, and America's women are not going back. We are moving forward!

Women of color and women veterans are quickly transforming the face of entrepreneurship in our country. Women entrepreneurs are building a stronger America every day. They need the capital to grow and the tools to thrive. Hillary Clinton has a plan that will ensure all of America's small businesses can compete and succeed in the global economy. Because Hillary sides with the little guy, that is why I’m with Her.

I'm Congresswoman Suzan DelBene of Washington. Before coming to Congress, I was an entrepreneur. I know that innovation is at the heart of who we are as Americans — and it is essential to keeping American workers, American products, and American ideas number one in the 21st century.

A decade ago, House Democrats enacted the first Innovation Agenda. In the majority, we made revolutionary investments in clean energy development, in affordable, world-class STEM education, and in expanding broadband to rural families.

And House Democrats will work with President Hillary Clinton to sustain America's lead in innovation — creating good-paying jobs, powering our economy, and driving bold solutions to the challenges facing our climate and our communities.

A strong America — an America that's "Stronger Together" — will lead the world in entrepreneurship, innovation, and clean energy.

Hi! I am Congresswoman Bonnie Watson Coleman of New Jersey. House Democrats believe America is strongest when we have an economy that works for everybody, not just for those at the top. If you're willing to work hard in our country, you deserve a secure financial future and a strong foothold on the American Dream: buying a home, sending children to college, and real retirement security.

We should be creating jobs by upgrading our roads, bridges, broadband, transit systems, energy grids, and water infrastructure. And we can pay for this progress by closing loopholes and making big corporations pay their fair share.

Democrats, led by Hillary Clinton, know that we must make college more affordable and lift the crushing burden of student debt that weighs on the futures of many young Americans and their families! America is stronger when everyone has a chance to succeed.

I'm Congresswoman Lois Frankel of the Sunshine State of Florida. I am the proud mother of a United States Marine Corps veteran who served in Iraq and Afghanistan. Our men and women in uniform, our veterans, and our military families give everything to our country. They embody our highest ideals: service, selflessness, and bravery.

We owe them a debt of gratitude we can never fully repay. As Democrats, we believe we have a responsibility to ensure every veteran gets the support, the health care, the education, and the job training he or she needs to succeed. And we're proud to stand behind Hillary Clinton, a candidate with clear plans to improve the lives of our veterans. Our veterans fought to protect our freedom and our security. We are a stronger America because of their sacrifice, and we owe them a strong future of honor and opportunity.

I'm Katherine Clark of the great commonwealth Massachusetts. We stand here tonight because generations of Americans, across our history, stepped forward to defend and advance our democracy. In a democracy, it is the voices of the people — not the checkbooks of the privileged — that must drive our politics and our policies. We want the democracy Hillary Clinton believes in, one that fights to make sure America works for everyone, not just the well-connected and the wealthy.

The special interests shouldn't be able to buy themselves a louder voice than America's hard-working families! Together, with Hillary Clinton by our side, we will cut the cancer of secret money out of our democracy and overturn Citizens United.

What does this mean for American families? It means a stronger America that is free from the grip of the gun lobby.

Ninety-one Americans are killed by gun violence every day. Republicans and the big money gun lobby shouldn't be blocking common sense legislation to keep guns out of the wrong hands! We held a sit-in, but now it's time to stand up and stand together to demand change.

I'm Stephanie Murphy, and I'm running to represent Florida in the House alongside these remarkable women! After 9/11, I left a job in the corporate world to become a National Security Specialist for the Secretary of Defense.

Democrats know a stronger America means confronting the threats around the world — without blinking and without undermining our values. Democrats are strengthening our fight against terror by working with our allies, not abandoning them.

My name is Val Demings, and I'm running for Congress in the great state of Florida. I spent 27 years on the Orlando police force and had the honor of serving as Orlando's first woman chief of police.

I know firsthand the tragedy that gun violence inflicts on families in America. And after 49 people were murdered at a nightclub in Orlando last month, let me tell you: our city takes it personally that Congress refuses to disarm hate. You don't need to be a police chief to know that our communities are less safe when criminals and suspected terrorists can walk into a gun shop or gun show and leave with a weapon.

On issue after issue, it's the leadership of women that makes a stronger America. With Hillary Clinton in the White House and these strong House Democratic women, together with women and families all across our nation, we will show the world what this statement really means: When Women Succeed, America Succeeds!