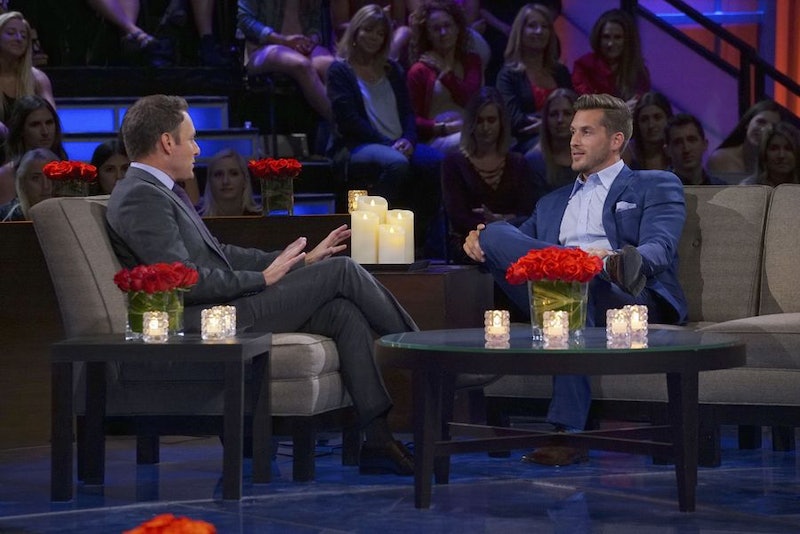 The Bachelorette finale doesn't air until next week, but I'm already thinking ahead to the future. And by future, I mean who the next Bachelor will be. Personally, I'm hoping ABC decides to go outside of this season for the next leading man, but if the network decides to follow tradition, one of JoJo Fletcher's finalists will end up with the gig, and there's a chance it could be Chase. After his dramatic exit from the show mid-fantasy suite — and then when he came back to redeem himself with an apology afterwards — he's officially made himself memorable. So will Chase be the next Bachelor ?

Based on his Men Tell All appearance alone, it definitely seems like he's gunning for it. When he finally got his chance to sit down with Chris Harrison, he talked about how blindsided he was by JoJo's rejection... and then mentioned that he's thankful she gave him the chance to learn what it's like to love someone and tell her how he feels, even if it didn't end happily. Generally, these are all ingredients that make up a Bachelor. America loves seeing someone who was heartbroken get a second chance at love, and that seems to be exactly what Chase has done.

If you're rooting for Chase, it seems just as likely he'll be the next Bachelor as anyone else at this point, but it way too early to know for sure. And he's got a pretty strong competitor in Luke, who was similarly heartbroken but didn't lash out about not getting a chance to spend the night in the fantasy suite. And as a fan, if I had to pick between the two of them, my choice would definitely be Luke.

Anything can happen between now and January, though. Hopefully, ABC doesn't keep us waiting too long. I need to know who will be handing out roses next year!